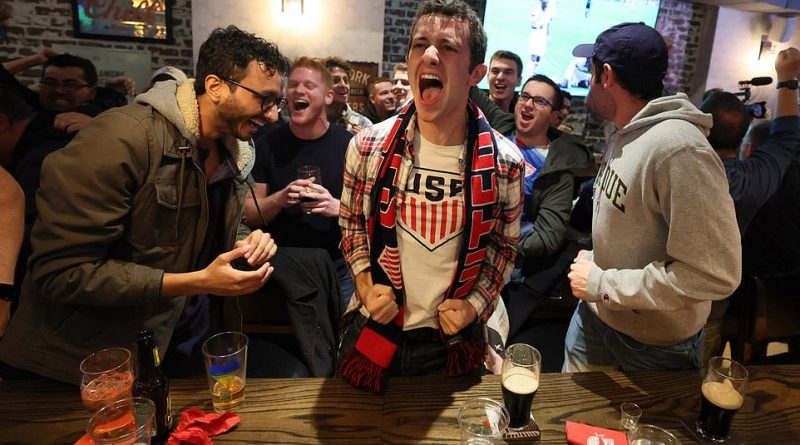 As if the week leading up to Thanksgiving wasn’t already packed, American soccer fans have hammered Monday’s World Cup opener into their busy daytime schedules.

With Team USA‘s World Cup opener against Wales scheduled for 2pm EST, bars across the US were packed at off-peak hours by those lucky enough to get out of work. Others who weren’t as fortunate watched Fox Sports and Telemundo’s coverage from Qatar on their phones and computers.

For many, it marks a new experience for the growing number of soccer fans in the US. The team didn’t qualify for the 2018 World Cup in Russia – considered one of the greatest disappointments in USMNT history – and the 2014 World Cup in Brazil was played at convenient times for American audiences, given the shared time zones.

Since then, soccer has moved ahead of hockey to become the fourth most-watched sport among Americans, who have grown accustomed to watching European matches on weekend mornings.

The sudden glut of American soccer talent has yet to translate to World Cup success, but it has given to some murmurings that the country finally has its ‘Golden Generation’ in the world’s most popular sport.

‘I think it can be, and I say that because – I’m sure other people will say this as well – but because of the talent and the youthfulness of the National Team,’ former USMNT star DaMarcus Beasley told The Athletic. ‘And then obviously, leading up to 2026, (the World Cup) is in America, everything is just in line to be that Golden Generation.’ 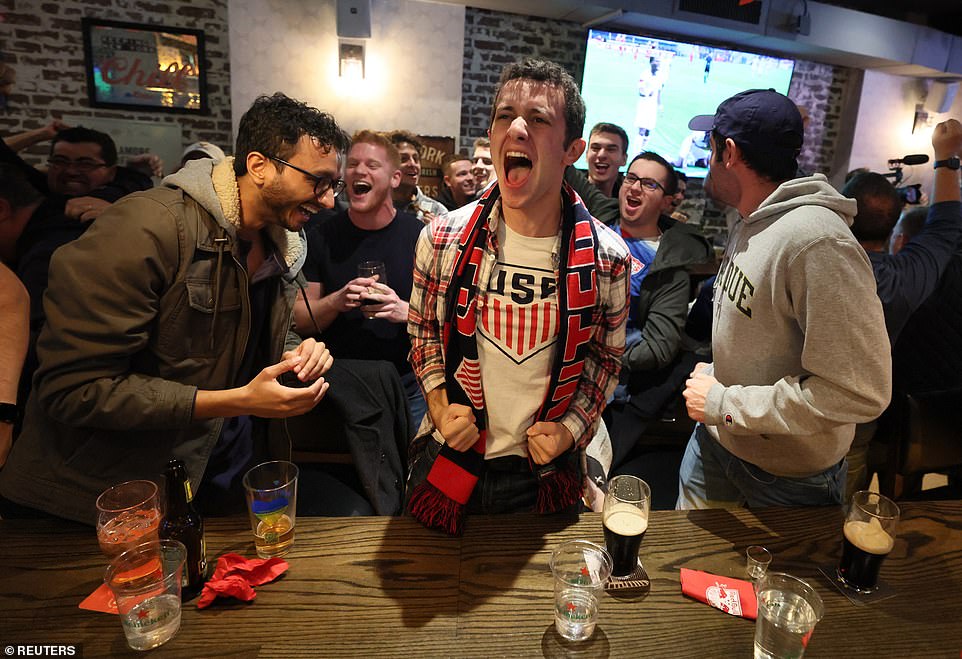 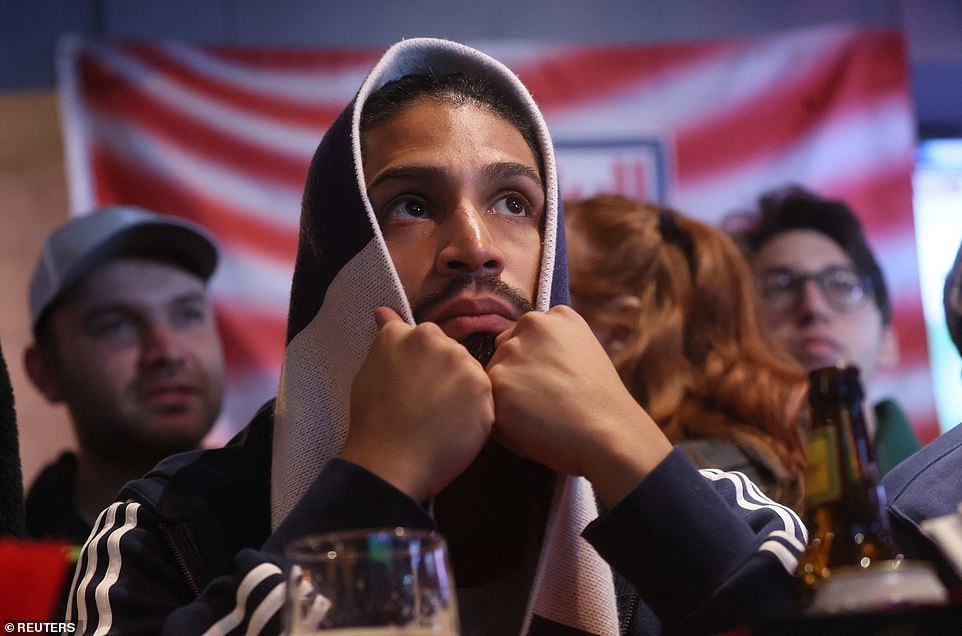 A fan in Hendrickson’s bar in Manhattan reacts after Gareth Bale pulled Wales even, 1-1, on a penalty kick 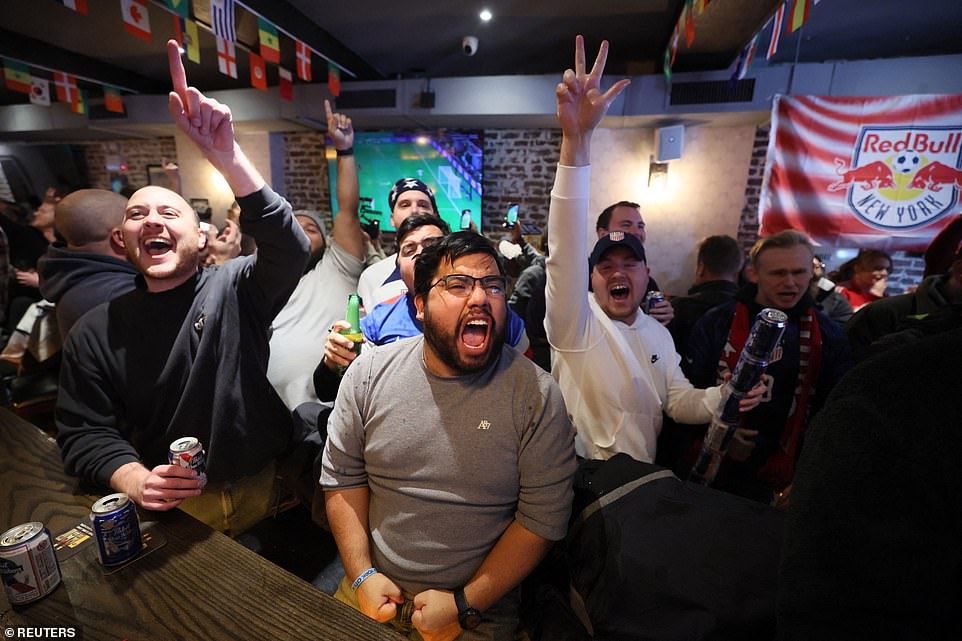 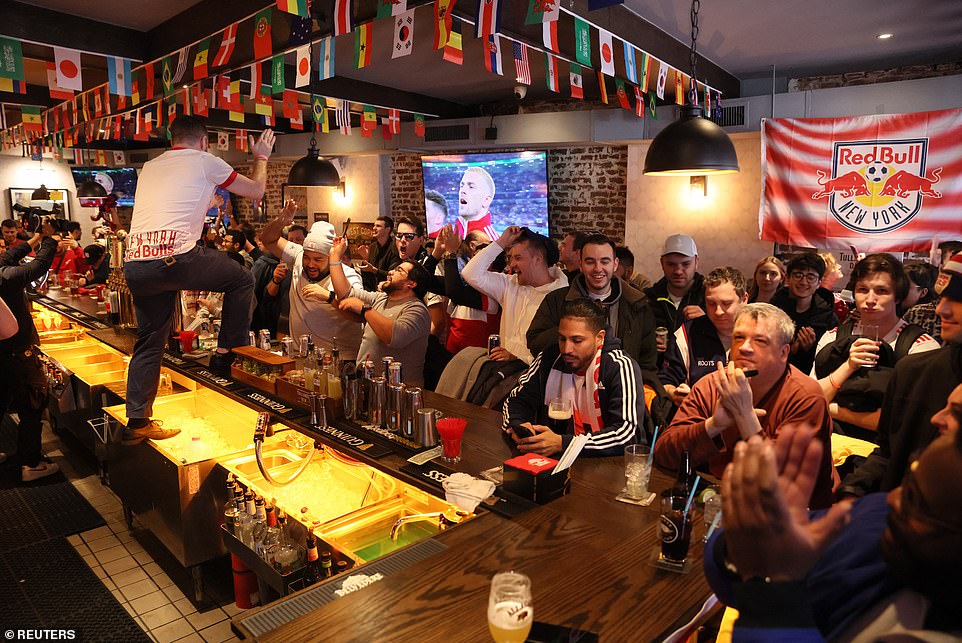 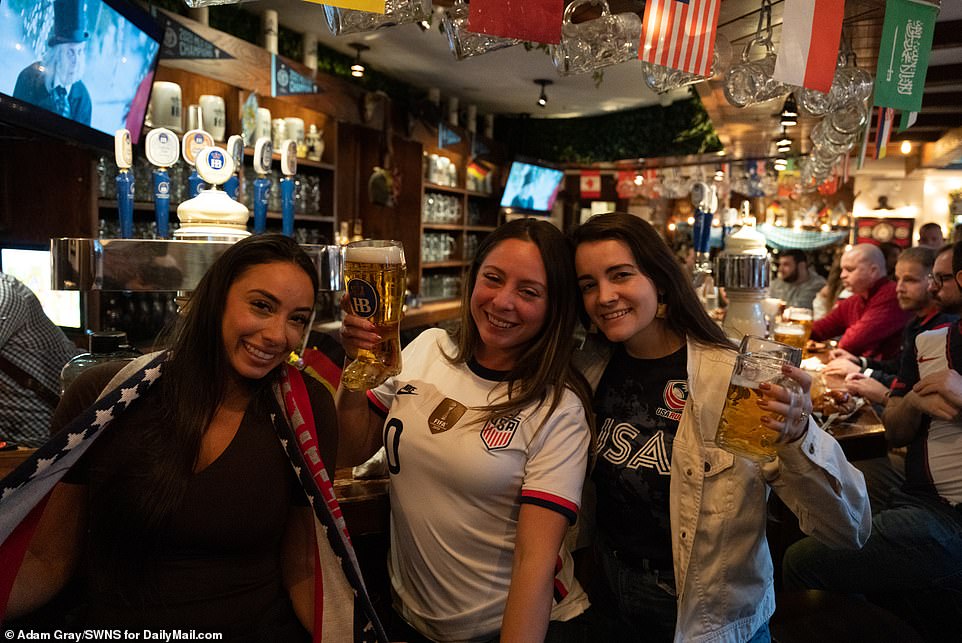 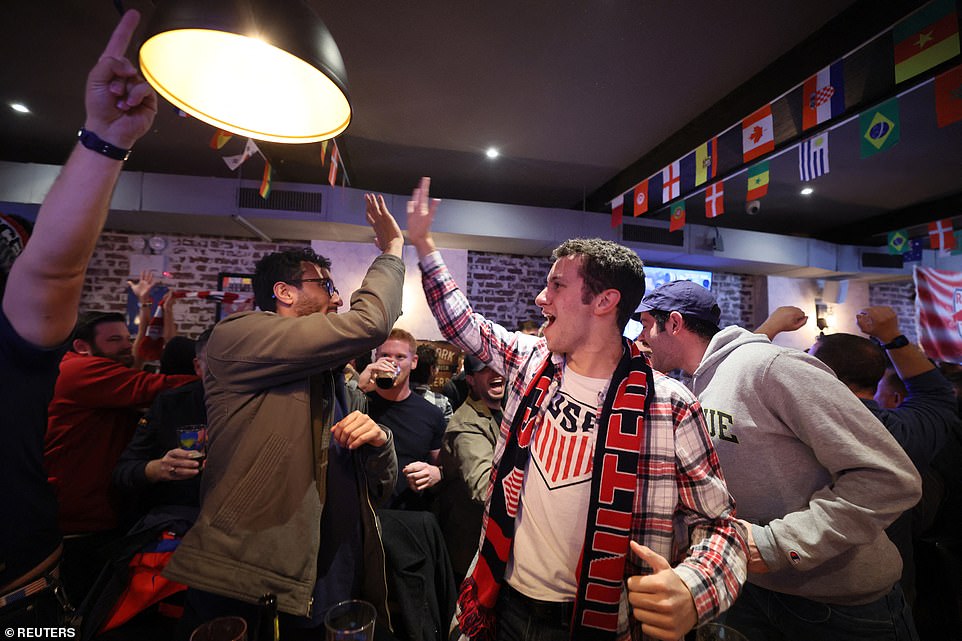 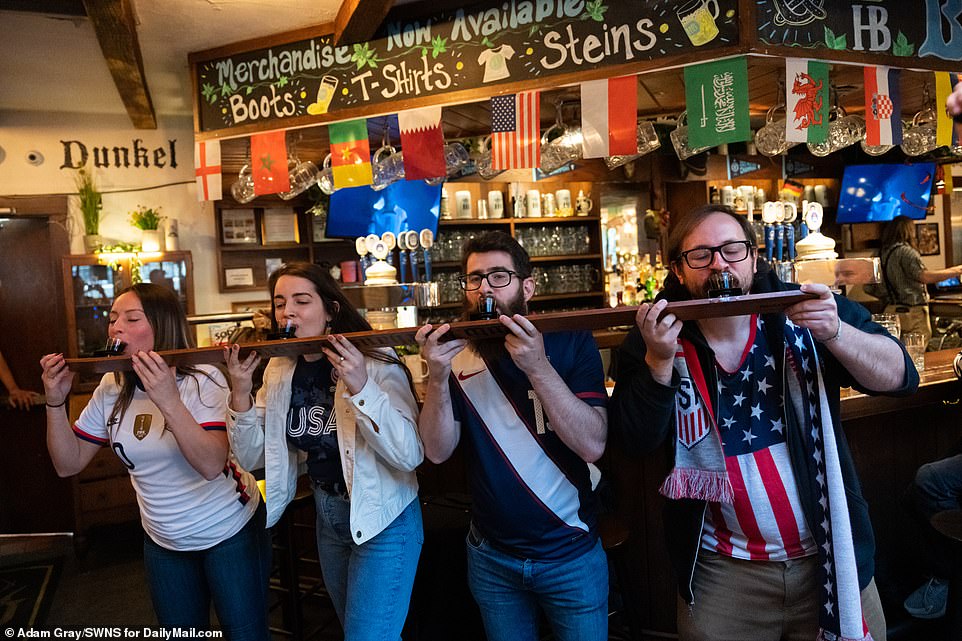 At the center of American’s youth movement is Adams, who was appointed captain at the unusual age of 23 to become the youngest at this year’s tournament and the youngest for the Americans at the soccer showcase since Walter Bahr in 1950.

‘I want to be a winner. So first off, I’m very competitive,’ Adams said after US coach Gregg Berhalter’s announcement Sunday. ‘I want to hold the guys around me to the same standard. I don’t want to lose and then have to point the finger and say, `You let me down today.′ I just want to make sure that everyone’s on the same page intensity-wise, mentality-wise, no frustration — we all buy into the same thing. And, yeah, I think I’ve been doing that since a young age.’

Adams was elected captain in a vote by about 35 players held in September and announced on the eve of the national team’s tournament opener against Wales.

‘For the last three-and-a-half years, we’ve been working with the leadership council,’ Berhalter said of a group that included Adams, Pulisic, McKennie and Walker Zimmerman. ‘We asked them, well, what do you guys want to do for the World Cup? And they thought it’d be better to have a captain named for the World Cup.’ 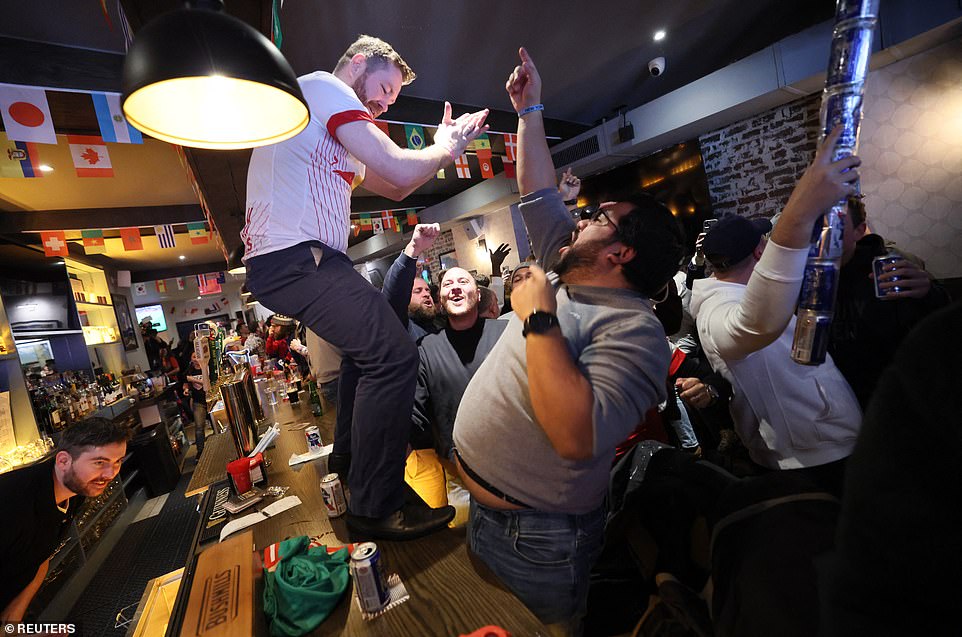 The last of the 32 captains announced for this year’s tournament, Adams is only the second under 30 years old. England forward Harry Kane is 29 and has captained the Three Lions since the 2018 World Cup, when he was 24.

Adams, from Wappinger, New York, captained the national team nine times previously, including seven wins, one loss and one draw.

Berhalter had rotated the armband since he was hired in December 2018. Pulisic captained the Americans 11 times and Zimmerman six times. Adams was captain in seven of 14 World Cup qualifiers, Pulisic four and Zimmerman three.

Ed McIlvenny (25) wore the armband for the famous 1-0 upset of England in Belo Horizonte and Harry Keough (22) for the opening loss to Spain. 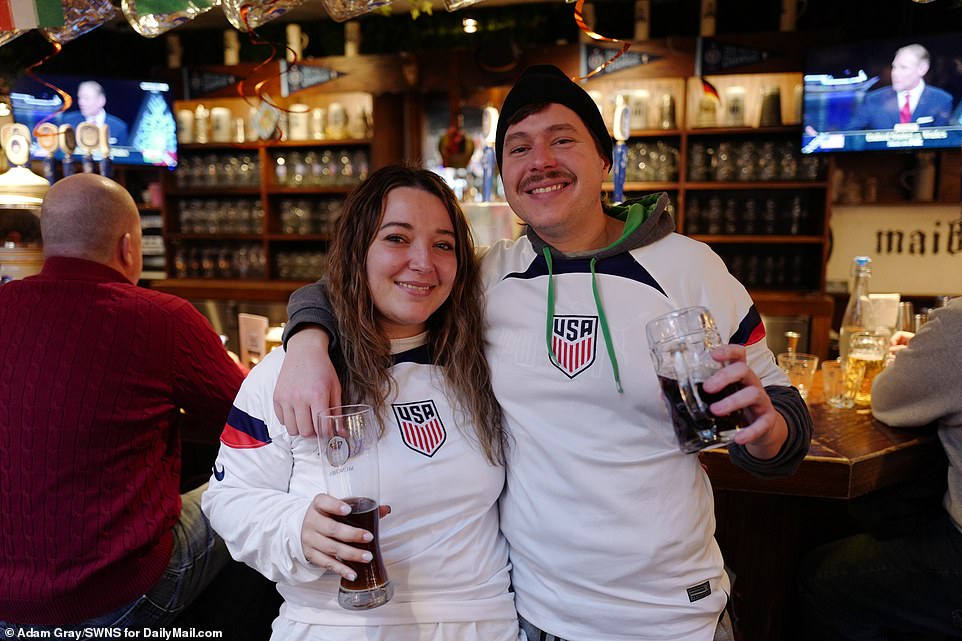 Blake Bravo, 29, and John Laselva, 32, pose for a photograph before the USA vs. Wales World Cup football game at Bierhaus

Adams made his national team debut in November 2017 and has made 32 international appearances. He debuted with Major League Soccer’s New York Red Bulls in 2015, moved to RB Leipzig in 2019 and to Leeds in the offseason.

‘We’re not a group of guys that it’s like, oh, I want to be captain,’ McKennie said Saturday. ‘Whoever has it, has it. The mission is still the same. The goal is still the same, and we just need all 26 players no matter their role to be on the same page and have the same role at the end of the day, which is to compete and win games.’ 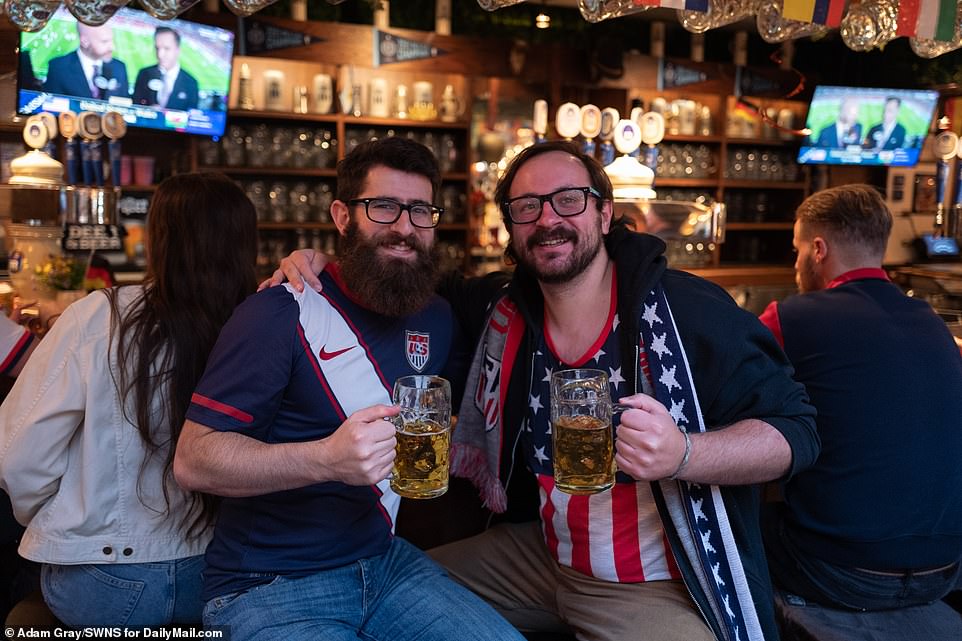 USA fans Pat McCarthy, 29, and Ryan Masserano, 29, pose for a photograph before the USA vs. Wales World Cup football game at Bierhaus NYC in Manhattan

The US players got a vote of confidence from President Joe Biden on Friday.

‘It says POTUS. That’s where it’s coming from,’ Berhalter said, reading the phone’s caller ID, according to excerpts of a video of players listening to the call.

‘You guys, I know you’re the underdog, but I’ll tell you what, man, you got some of the best players in the world on your team, and you’re representing this country, and I know you’re going to play your hearts out, so let’s go shock ’em all,’ Biden said.

‘You keep trusting in one another, play as hard as you can, and for you and your families, your teammates — and the whole country’s rooting for you,’ Biden went on.

Berhalter and the players thanked Biden for his call, made two days before Biden’s 80th birthday.

Back in the World Cup after missing the 2018 tournament, the United States opens against Wales on Monday, meets England on Friday and closes group play against Iran on November 29.