Anti-fracking campaigners have vowed to ‘pull out all the stops’ as they slammed new Prime Minister Liz Truss‘s ‘ignorance’ in lifting the ban.

Campaigners in Lancashire are preparing to fight for a second time, after a 1,000-day protest outside the Cuadrilla fracking site in Little Plumpton, near Blackpool, in 2018.

They thought their battle was won in November 2019 when a moratorium on fracking was announced following tremors at the site.

But today Liz Truss announced that a ban on fracking will be lifted and said she hopes to get gas flowing from onshore shale wells in as little as six months where there is ‘local support’. 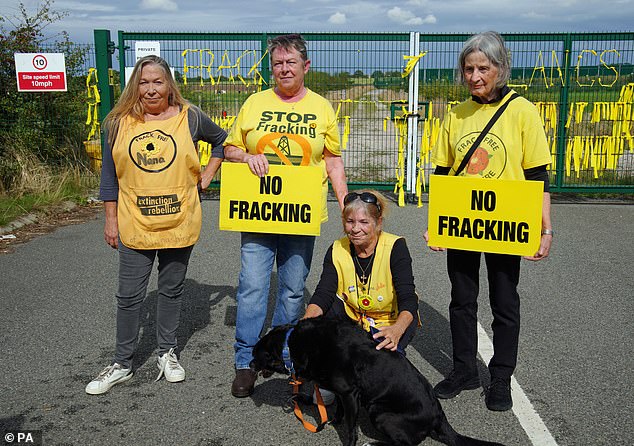 Anti-fracking campaigners have vowed to ‘pull out all the stops’ as they slammed new Prime Minister Liz Truss’s ‘ignorance’ in lifting the ban. Pictured left to right are Tina Rothey, Tracey Booker, Julie Daniels and Pauline Jones outside the fracking site in Little Plumpton, near Blackpool 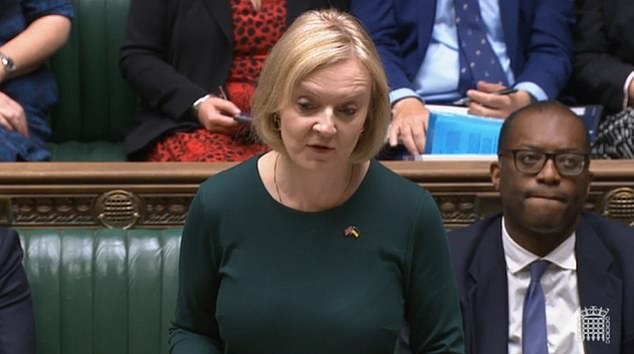 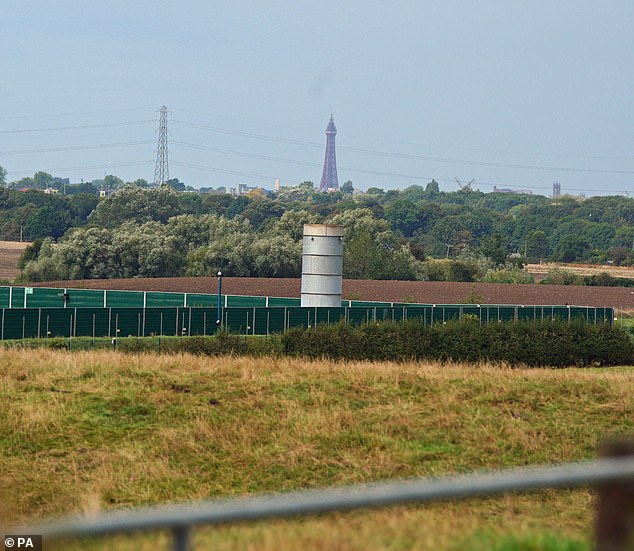 The fracking ban in 2019 was the result of an 1,000-day protest outside the Lancashire site

Ms Truss told the Commons: ‘We will end the moratorium on extracting our huge reserves of shale, which could get gas flowing as soon as six months, where there is local support for it.’

She said the reversal of the ban will be part of a long-term plan to make the UK a net energy exporter by 2040 – as currently the UK itself only produces 48 per cent of its gas demand.

Fracking firms are considering offering a 25 per cent discount on bills if local residents agree to allow fresh drilling near their homes. 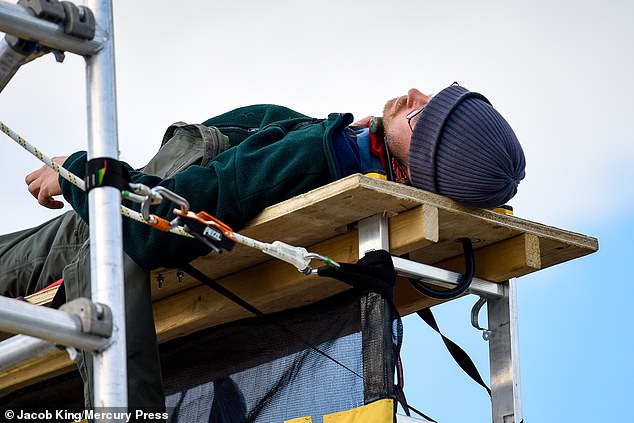 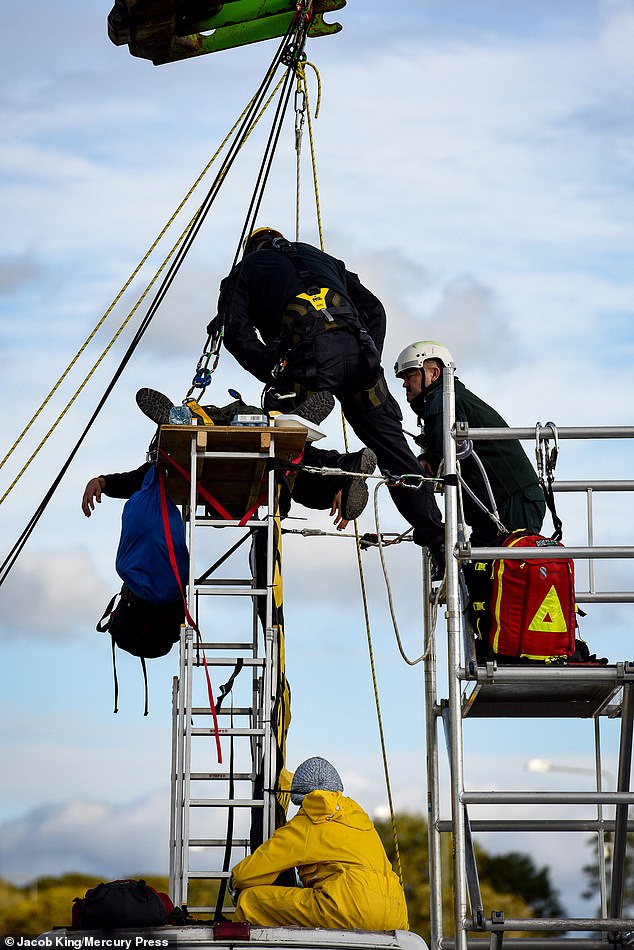 In that year’s campaign, two protestors had to be cut free and were taken away by police after securing themselves to the top of the van

But the process has been linked to earth tremors and the technology sees high-pressure water and gasses pumped into gas and oil-rich seams to break them open and extract the mineral wealth.

As a result the protestors against the controversial pumping process have resumed their fight.

Campaigner Julie Daniels, 62, said: ‘Liz Truss has no idea what she’s talking about. She thinks we’re going to be pumping gas within six months. What ignorance.’

Ms Daniels and three fellow members of campaign group Nanas, set up to oppose fracking in the county, arrived at the site following the Prime Minister’s announcement wearing yellow ‘frack free’ tabards and with ‘no fracking’ placards.

What is fracking and why is it so controversial?

Fracking is the process of drilling down into the earth before inserting a high-pressure water mixture to release gas and oil within rocks.

Fracking is estimated to have offered gas security to the US and Canada for around the next 100 years.

Fracking was halted in the UK in 2019 but Liz Truss has confirmed she will reverse the ban.

With energy bills rising in April after Russia invaded Ukraine, the government said ‘all options’ would be on the table.

Why is it controversial?

Fracking is controversial due to the potentially cancer-causing chemicals used to extract oil and gas, which could then contaminate local water supplies.

Some also argue, fracking, which requires a huge amount of water, may distract energy firms and the Government from investing in renewable energy sources.

The process has been linked to earth tremors.

Source: BBC and The Guardian

‘We didn’t think we’d have to come back,’ she said.

‘We worked tirelessly for years. It went on and on and we were mostly held together by the solidarity of the community and from right across the UK.’

Campaigners are prepared to return, she said.

In the process leading up the ban in 2019 the protestors were joined by celebrity supporters such as Vivienne Westwood and Emma Thompson.

Police even had to cut two people out of a set of tyres, which they had apparently cemented their arms into.

Two others had to be cut free by police after they parked their van at the entrance of the site and secured themselves with D-locks to a platform structure on top of their vehicle.

Ms Daniels added: ‘Nobody wants to do this again but if we don’t object, if we don’t push back, who is going to stop it?’

Fellow campaigner Tina Rothery, 60, said: ‘We will oppose this with legal challenges, planning applications. We will call on XR (Extinction Rebellion) and the unions and the lines to blockade things.

‘We will pull out all the stops. This time we won’t settle for a moratorium either. ‘We’re just going to keep on hammering this until we get the proper ban on fracking.’

Over the road, one man said he bought his house in November in the belief the fracking site would not be a problem.

He said: ‘We almost bought here a few years ago but decided not to because of the fracking.

‘We absolutely did not think it would be a problem this time because they had the moratorium and were starting to dismantle the site.

‘I’m concerned about the activity that might go on around here with protesters, but the fracking itself is equally bad.

‘We felt the earthquakes before when we lived about three miles away.’

Chris Holliday, 60, who also lives nearby, said: ‘At the moment, they don’t have any planning permission to frack. Their only obligation is to restore the site by April 2023.

‘The drilling was very intrusive and we experienced all of the earth tremors. ‘It just puts you on edge. You can’t really relax.

‘The community here fought against Cuadrilla and fracking does not have support here.’

Cuadrilla chief executive Francis Egan welcomed Ms Truss’s announcement and said the Government has made the ‘right call’. He added: ‘We look forward to getting started.’