Aussie rugby sevens star and Olympic gold medallist Ellia Green has announced in a video that he has transitioned to male, something he called ‘the best decision of his life’.

The 28-year-old realised as a young child that the gender he was assigned at birth was not the identity he felt deep down.

In an inspirational video released by the Bingham Cup, colloquially known as rugby union’s gay/inclusive World Cup, Green told the world that he had transitioned to male.

One of Australia’s greatest Sevens players, Green won gold at the 2016 Rio Olympics and also played NRLW footy for the New Zealand Warriors – but those sporting achievement pale into insignificance as he attempts to be an inspiration for others who experience similar feelings about their gender identity. 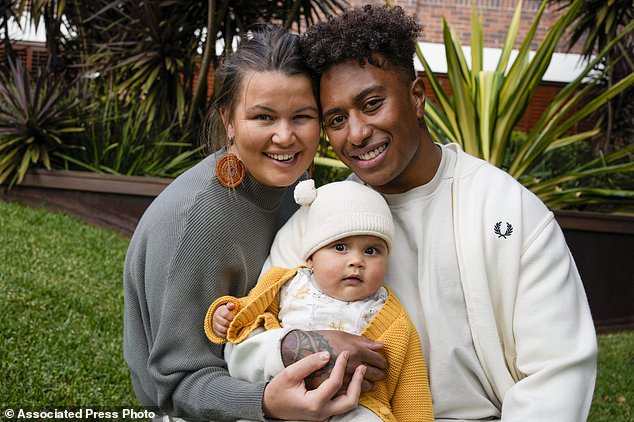 Green, who has kept the same name, revealed making the transition to male is the best decision of his life.

The gold medallist has been through some ‘dark times’, but thanks to the help of his beautiful partner Vanessa Turnbull-Roberts and their daughter Waitui, is in a much better place since the transition.

Green said he’s a ‘full-time daddy, and it’s hard, maybe harder’ than anything he’s ever done.

He also credits Vanessa, who has a law degree and is now doing her doctorate as someone who has ‘inspired me every single day.’ 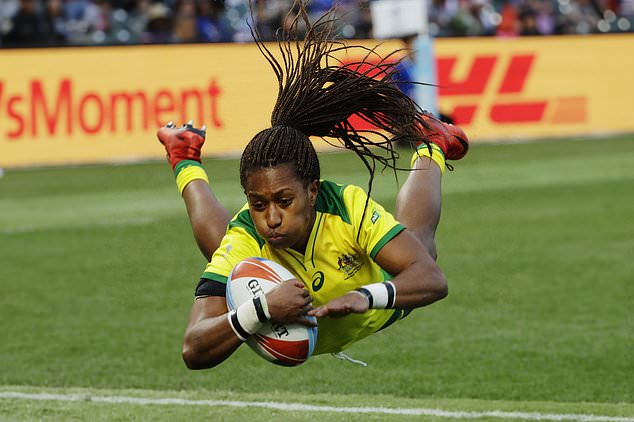 Ellia Green scores a try during the Women’s Rugby Sevens World Cup final in 2018. He’s since retired after an illustrious career and made the transition to male

Green hopes his story will inspire other trans people to be confident in their decisions about who they want to be.

‘I just knew it was going to be the most liberating feeling when I had that surgery and to be in the body I knew I had to be,’ Green said in the video announcing the transition.

‘That was a bright spark in my mind during these dark times facing demons, but I knew there was light at the end of the tunnel. 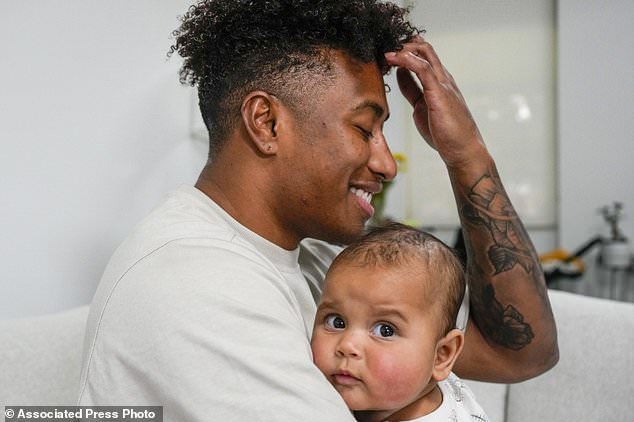 Ellia Green is pictured with his daughter Waitui at home in Sydney. He has gushed over the role of being a father to his adorable daughter

Gender identity in rugby has been a controversial issue since global governing body World Rugby last year banned transgender women from taking part in the women’s game over safety concerns.

While not overly keen to centre his own transition in the debate, Green is certain that when it comes to balancing the various issues, inclusion needs to come out at the top.

‘People deserve a choice to do what they want and achieve their dreams,’ he said.

‘No one likes to be excluded because of how they identify, it’s like being bullied and judged … and that’s when you see the rates of suicide increase and mental health illness and depression.

‘After finishing up my rugby career, that was something I was really excited about because I had been planning it for a while.

‘I knew I couldn’t do hormone therapy or surgery during my career … it’s all happened so quickly,’ Green told Reuters. 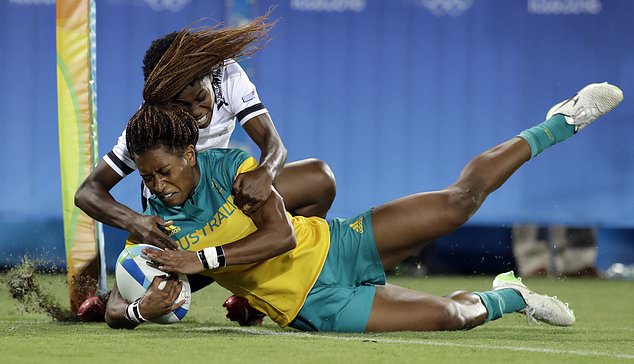 Ellia Green scores a try at the Rio Olympics. Green also won a Commonwealth Games silver medal for Australia in 2018

While the retirement from rugby has since had an overwhelmingly positive conclusive, Green admits to some very ‘dark days’ before the transition.

The rampaging winger and human highlights reel represented Australia for almost 10 years, wearing green and gold for 149 games, as well as playing for the Warriors in the 2020 NRLW competition.

Green was previously a talented sprinter, before being identified as a possible elite recruit for rugby sevens in 2012. 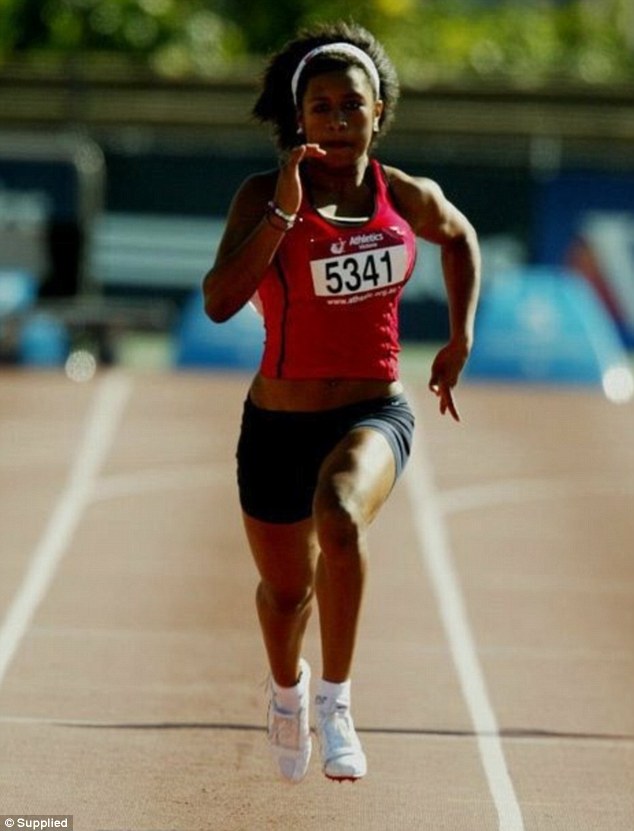 Dreams: She also admitted that she would love to return to track running at some stage – perhaps in her thirties (pictured today)

And the rest, as they say, is history.

The 172cm, 78kg wrecking ball went on to score an incredible 141 tries (the fourth most in history) and 739 points over the 149 matches, and was almost impossible to stop once he had a full head of steam.

He was poetry in motion whenever he had the ball in hand.

Despite the storied career, Green was controversially left out of Australia’s rugby sevens squad for the Tokyo Olympics last year, something coach John Manenti described at the time as the ‘toughest call of his career’.

It led to a downward spiral of sorts, with Green, like many athletes, linking a disappointment in the sporting world to some sort of blight on her character – a devastating reality many athletes experience that can lead to serious mental health issues.

‘This is what happened to me. Pretty much my rugby career ended and I had been in and out of mental health facilities for serious issues. My depression hit a new level of sadness,’ Green told AP.

He’s in a much better place now with Vanessa and their infant daughter, Waitui.

‘Vanessa was pregnant and having to come to hospital to visit, I was having bad episodes. That´s the last time I want her to have to see me like that,’ Green said.

‘But the only way to help heal is to talk about it … I’d like to help someone not feel so isolated by telling my story.’ 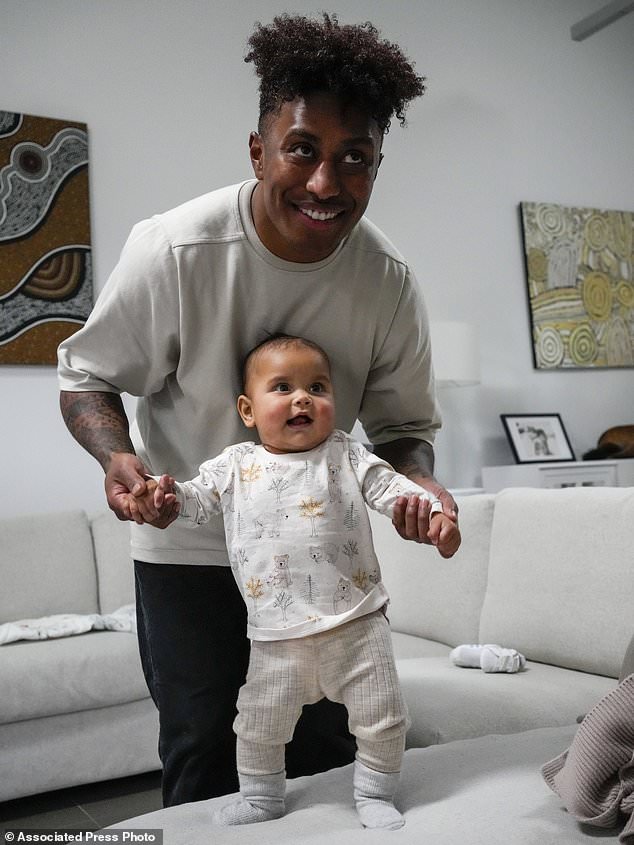 Realising that sharing his experience could be lifesaving for others is what compelled Green to go public in a video to be shown Tuesday to participants at an international summit on ending transphobia and homophobia in sport.

The summit is being hosted in Ottawa as part of the Bingham Cup.

The only other transgender or gender diverse Olympic gold medalists are Caitlyn Jenner and Quinn, who goes by one name and was part of Canada’s winning womens soccer team in Tokyo last year.

Seeing so few trans athletes at the elite level and so much negative commentary on social media, particularly since World Rugby’s decision to bar transgender women from playing women´s rugby, hastened Green’s push to highlight the harm those things can cause some children.

Most importantly, it´s an attempt to draw attention to a serious health issue – some studies say more than 40 per cent of trans youth had considered attempting suicide.

The story has been a difficult one at times.

Green, who was assigned female at birth, was adopted by Yolanta and Evan Green and moved to Australia from Fiji at age 3.

‘I guess from witnessing that, I knew from an early age that was not (the kind of) relationship I wanted to have, but it shaped me to know how a woman should be treated,’ Green said.

‘I do believe that even through traumatic circumstances there was a lot to learn from it.’

It was also a childhood that for Green was marked by an overwhelming realization.

‘I always used to wear my brother´s clothes, played with tools, and ran around with no shirt on. Until I grew breasts, and I thought ‘oh no’.

‘My mom would dress me in girlie outfits . . . I always wanted to make her happy, so if she wanted me to wear a dress, I wore a dress,’ said Green. 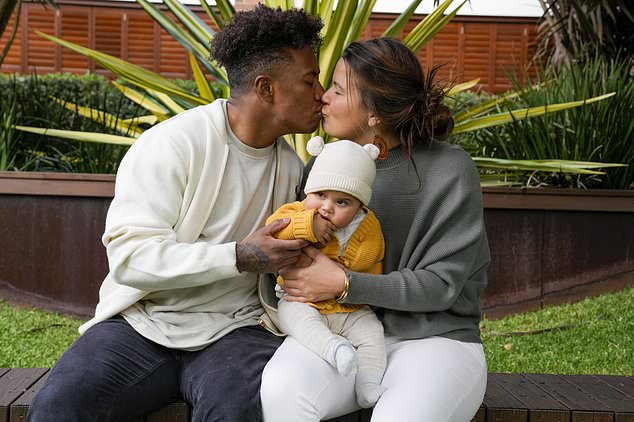 Yolanta also helped channel Green into sports, and excellence as a sprinter in track and field eventually led to a professional career in rugby.

Australia beat New Zealand in the Rugby Seven final at Rio to win the inaugural gold medal; and Green, a flying winger, was among the stars of the show.

All the while, though, the deeper feelings were becoming clearer for Green and really peaked after announcing the decision to retire from rugby last November, a few months after missing selection for the Australian women´s team for the delayed Tokyo Olympics.

‘I spent a lot of time after I finished up my career with Australian rugby just in the house, in a dark room, I didn´t have the confidence to see anyone,’ Green said in the video pre-recorded for the summit.

‘I was ashamed of myself, I felt I had let a lot of people down, especially myself and my mom. I felt like a complete failure, it was heartbreaking,’ he added, explaining the feelings that lingered after being left off the Olympic team.

‘The one thing that did keep me positive is that I had already planned my surgery and treatment towards my transition. It was something I was counting down the days with my partner.’

Now Green wants to advocate for others, emphasizing the harm that can be caused when sporting bans are introduced and how those policies can amplify negativity toward trans and gender diverse people.

‘Banning transgender people from sport is disgraceful and hurtful,’ Green says. ‘It only means the rates of suicide and mental health issues will get even worse.’

Green’s comments coincide with the release of a study by the University of British Columbia in Canada and Monash University in Melbourne, Australia which shows a disconnect between rugby´s leaders and the women who play rugby. 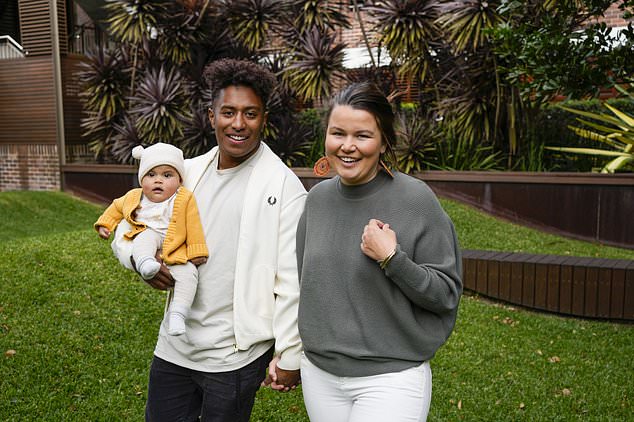 The survey shows that while about 30 per cent of women think trans women have an unfair advantage they overwhelmingly do not support banning trans athletes from rugby.

Playing rugby at any level, or even coaching, is not on Green´s radar for now. He’s currently working at the Sydney International Container Terminal, but is also studying for a university degree in international security and has ambitions to be advising companies on general and cyber security.