Extinction Rebellion has announced a protest will go ahead this evening against British politics and the handling of climate change despite the Queen‘s death on Thursday.

MailOnline can reveal eco activists from Extinction rebellion have even suggested people ‘glue and chain yourselves’ to the route of the Queen’s funeral in London.

Other climate warriors have slammed King Charles III, calling him ‘bad news’ for the country.

Although Extinction Rebellion (XR) dialled down the planned protests, organisers within the decentralised organisation said a ‘lighter touch’ version would go ahead tonight.

Her Majesty The Queen died aged 96 at Balmoral yesterday and the nation has begun a period of mourning for the adored monarch. 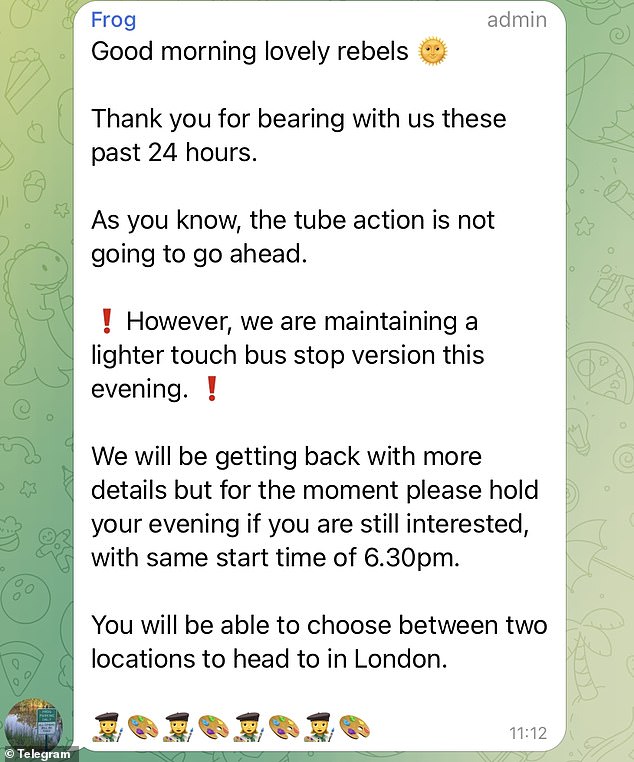 Extinction Rebellion told its followers it will protest on Friday evening against British politics and the handling of climate change in the UK. Messages seen by MailOnline show people urging for the protest to go ahead in a Telegram messaging of more than 1,000 people

Even though the Queen died on Thursday, protesters want to continue their activism and one even claimed Her Majesty would support that 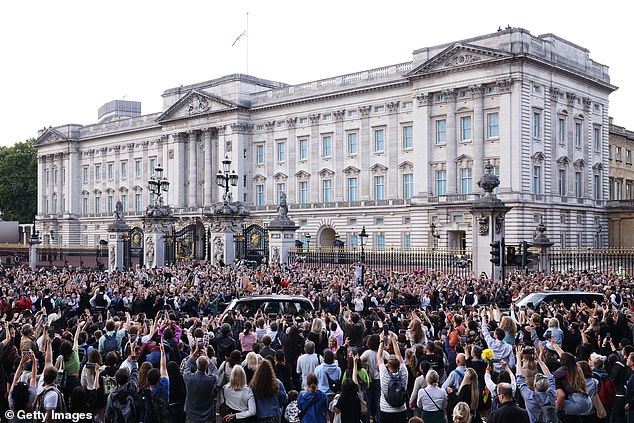 King Charles III and his Queen Consort Camilla were given a rapturous welcome by thousands of well-wishers gathered outside Buckingham Palace today as he greeted his subjects for the first time as monarch.

Huge crowds cheered the couple as they arrived at the palace before a visibly emotional King left his state Bentley and began shaking hands with countless members of the public standing behind a barrier amid shouts of ‘God Save the King’.

However, environmental activists are planning a ‘disruptive’ protest in the capital tonight. 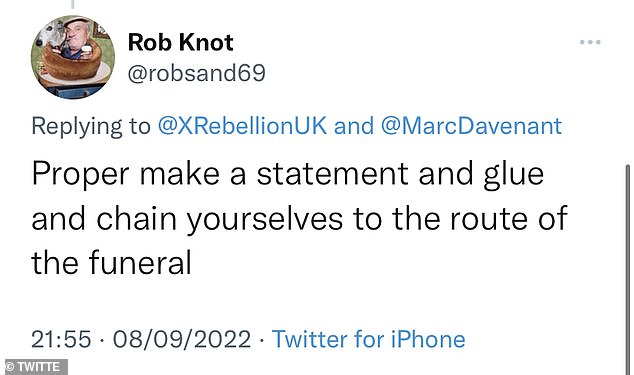 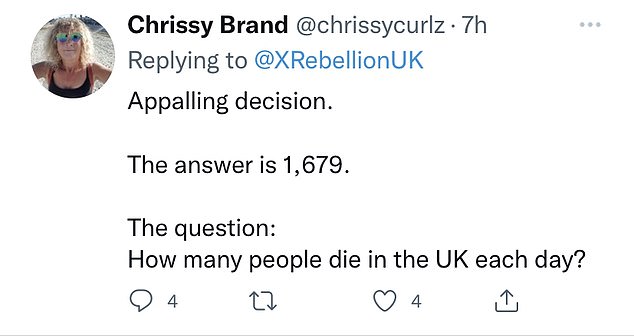 Climate activists were furious that XR called off bigger protests. Eco warrior Rob Knot even called on people to ‘glue and chain’ themselves to the Queen’s funeral route

Extinction Rebellion had planned a larger protest starting today involving plastering their own adverts across London and starting a ‘rage of resistance’.

Instead, groups of activists will carry out a ‘lighter bus stop version’ this evening that includes people putting their own posters on top of traditional advertising boards, many of which are now showing tributes to the great monarch.

Eco activists have previously brought the country to a standstill with tactics including glueing themselves to trains, marching through the streets and blocking cars and even ambulances on British motorways.

The controversial eco group wanted to occupy Hyde Park for three days and nights before packing up and going ‘out with a bang’.

Messages seen by MailOnline include activists doubling down on protests and even claiming the Queen would have wanted them to carry on. 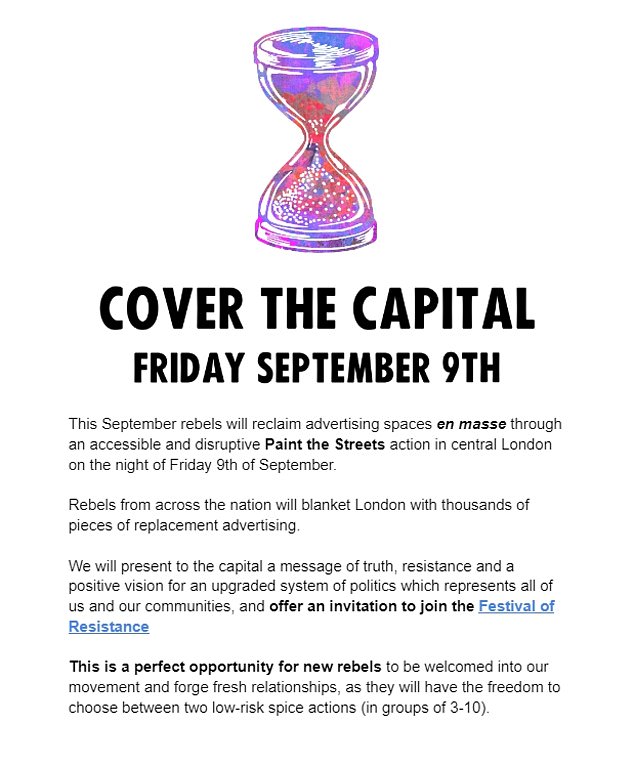 The eco group had initially wanted a mass protest that included replacing adverts on the tube and at bus stops. Now the group only plans to put up their own posters at bus stops as activists congregate in London 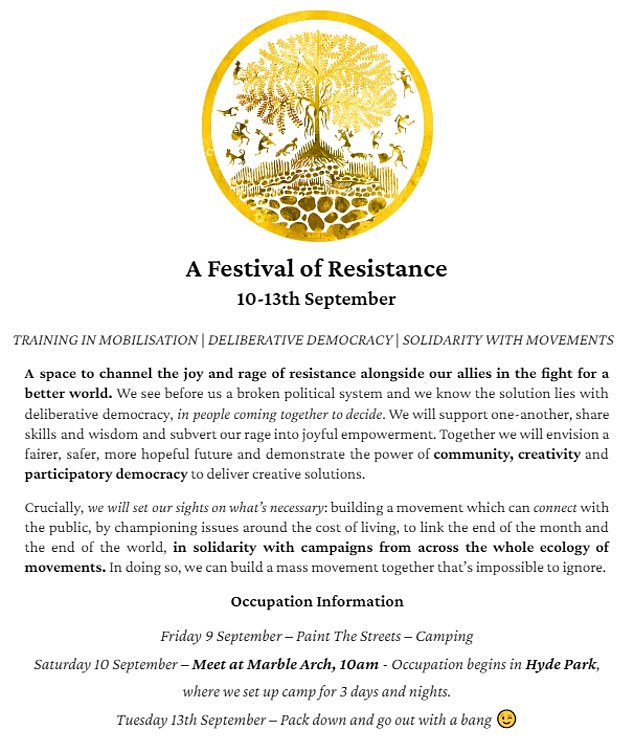 There was supposed to be a ‘Festival of Resistance’ this weekend with eco warriors ‘occupying’ Hyde Park for three days and nights. The group said it wanted to ‘go out with a bang’

Eco warriors on Extinction Rebellion’s various Telegram chats have urged activists to ‘do your worst’ in London tonight.

Although some XR channels advised people not to come to the capital, a group of more than 1,000 activists called Paint The Streets announced protests across London tonight.

Organisers said they would be using ‘traditional counter-culture subverting designs’ and added ‘see you tonight rebels’. 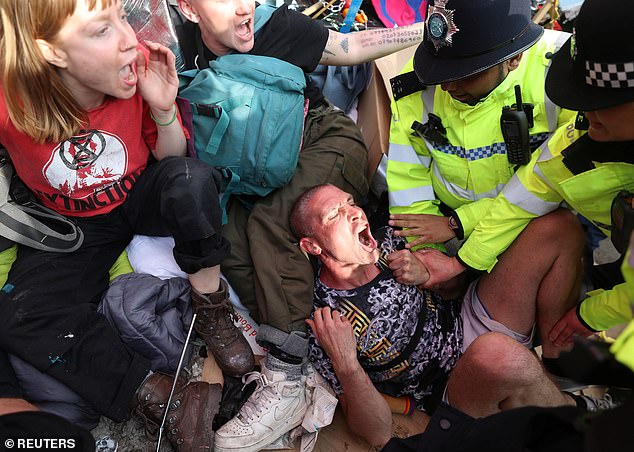 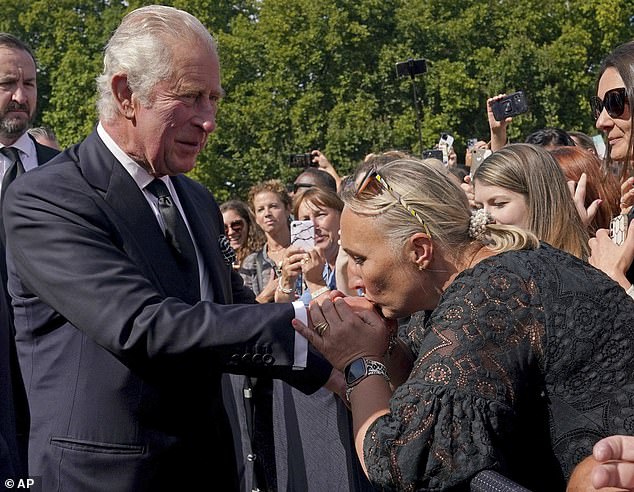 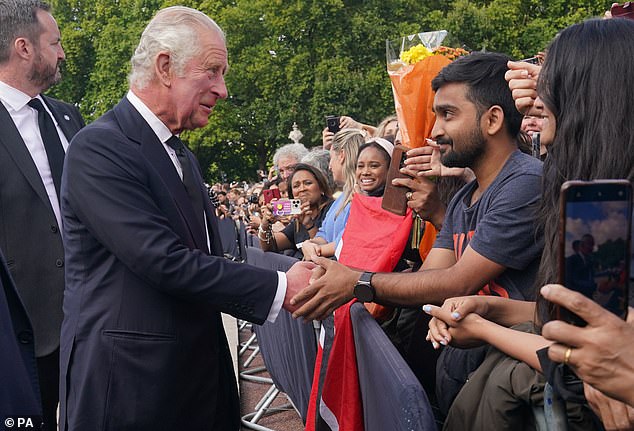 Huge crowds cheered the couple as they arrived at the palace before the King left his car. Several people kissed his hand as he passed

Eco activist Dave Koumi said: ‘Didn’t know HM the Queen personally but I’m fairly sure she was an advocate of free speech.’

He added: ‘I’m going to wear a black armband all weekend out of respect but still attend the whole event.

‘I don’t see a conflict of interest.’

Another user said: ‘[Liz] Truss is bad news and Charles too.’

After XR’s announcement the protest would be scaled back, although some agreed it would lead to a backlash against the group, other furious eco activists issued a rallying cry.

Twitter user Rob Knot said: ‘Make a statement and glue and chain yourselves to the route of the funeral.’

Activist Chrissy Brand said it was an ‘appalling decisions’.

Fellow eco warrior Matthew O’Hara said: ‘Where is the compassion  to the hundreds that die every day from poverty, or the victims of colonialism who suffered while the natural wealth of their countries were looted, just to end up in her palaces and jewellery.’ 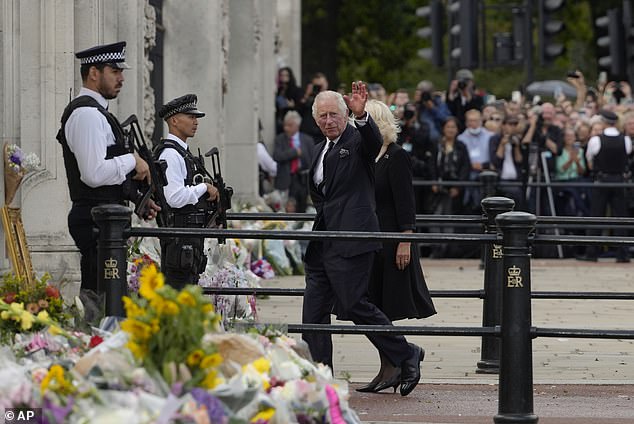 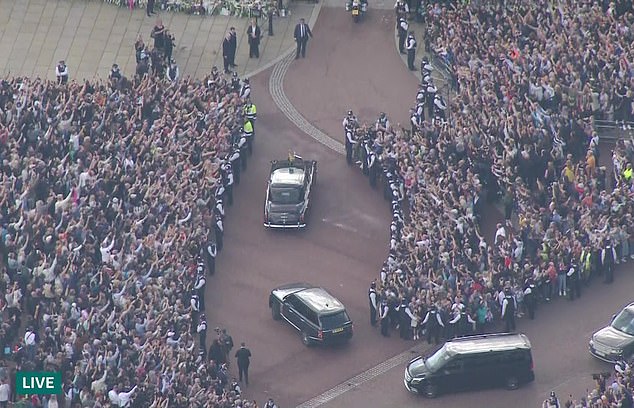 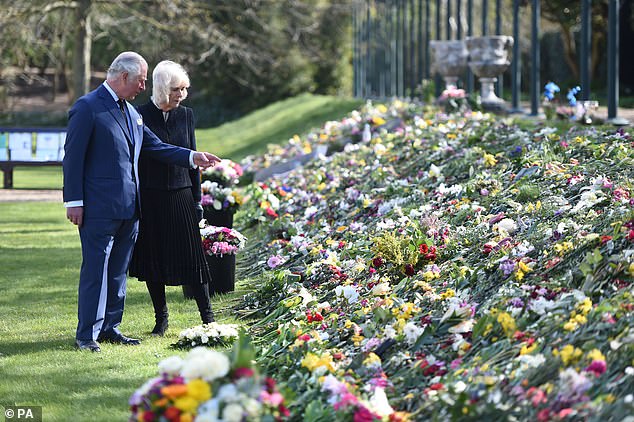 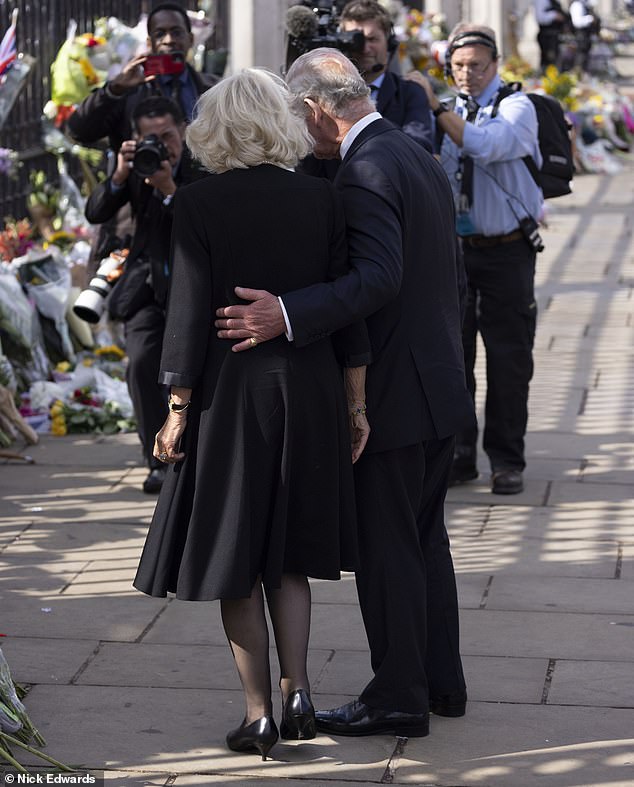 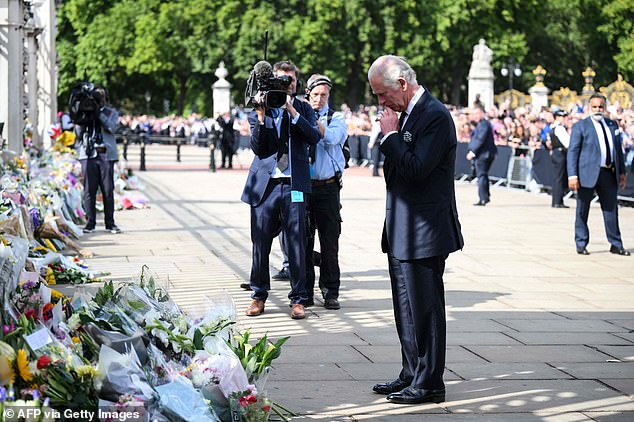 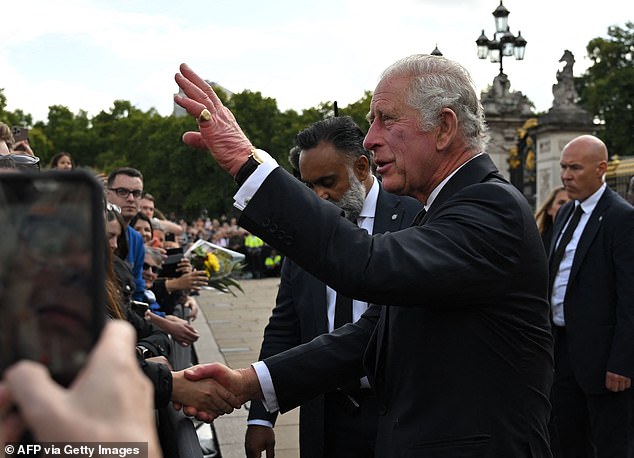 Earlier today, in moving scenes less than 24 hours after the death of the Queen – Charles’ mother – an impromptu rendition of the National Anthem broke out as the Royal Standard was raised above Buckingham Palace for the first time of his reign.

Onlookers shouted three cheers for Charles as one woman leaned over to kiss him on the hand and another kissed him on the cheek. Others held up their phones to try and get a glimpse of him as he passed, as the Queen Consort followed behind at a distance before joining the King at his side to view the floral tributes left outside the gates.

Regarding the group’s larger protest, XR said: ‘For now, the bus tour is going ahead as planned until the teams involved meet to decide the best approach.

‘There will be a space to come together on Saturday at Mile End Park for the afternoon for those in London or planning to travel to London in the next few days.

‘Due to the passing of Queen Elizabeth, the Rebellion Planning team, and other groups involved, have made the difficult decision to postpone the Festival of Resistance this weekend in London until further notice.

‘It was felt that the risks to our mobilisation efforts outweigh the desire to continue, and occupying a Royal Park at this time would not be practical.

‘The decision has not been made lightly and in full appreciation that it will impact so many who have put much time, heart and commitment into making this festival the beautiful reality it was gearing up to be.

‘This message comes with immense gratitude and respect for everyone involved and every single person who was about to attend Rebellion for the first time.

Extinction Rebellion refused to comment when approached by MailOnline about the planned protest this evening.