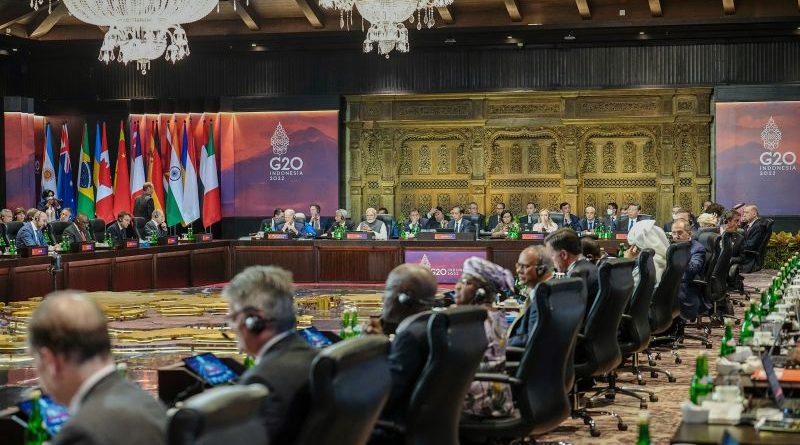 
The three major summits of world leaders that took place across Asia in the past week have made one thing clear: Vladimir Putin is now sidelined on the world stage.

Putin, whose attack on Ukraine over the past nine months has devastated the European country and roiled the global economy, declined to attend any of the diplomatic gatherings – and instead found himself subject to significant censure as international opposition to his war appeared to harden.

A meeting of the Asia-Pacific Economic Cooperation (APEC) leaders in Bangkok closed on Saturday with a declaration that references nations’ stances expressed in other forums, including in a UN resolution deploring “in the strongest terms” Russian aggression against Ukraine, while noting differing views.

It echoes verbatim a declaration from the Group of 20 (G20) leaders summit in Bali earlier this week.

“Most members strongly condemned the war in Ukraine and stressed it is causing immense human suffering and exacerbating existing fragilities in the global economy,” the document said, adding that there were differing “assessments” on the situation within the group.

Discussions within the summits aside, the week has also shown Putin – who it is believed launched his invasion in a bid to restore Russia’s supposed former glory – as increasingly isolated, with the Russian leader hunkered down in Moscow and unwilling even to face counterparts at major global meetings.

A fear of potential political maneuvers against him should he leave the capital, an obsession with personal security and a desire to avoid scenes of confrontation at the summits – especially as Russia faces heavy losses in the battlefield – were all likely calculations that went into Putin’s assessment, according to Alexander Gabuev, a senior fellow at the Carnegie Endowment for International Peace.

Meanwhile, he may not want to turn unwanted attention on the handful of nations that have remained friendly to Russia, for example India and China, whose leaders Putin saw in a regional summit in Uzbekistan in September.

“He doesn’t want to be this toxic guy,” Gabuev said.

But even among countries who have not taken a hardline against Russia, there are signs of lost patience, if not with Russia itself, than against the knock-on effects of its aggression. Strained energy, issues of food security and spiraling global inflation are now squeezing economies the world over.

Indonesia, which hosted the G20, has not explicitly condemned Russia for the invasion, but its President Joko Widodo told world leaders on Tuesday “we must end the war.”

India, which has been a key purchaser of Russia energy even as the West shunned Russian fuel in recent months, also reiterated its call to “find a way to return to the path of ceasefire” at the G20. The summit’s final declaration includes a sentence saying, “Today’s era must not be of war” – language that echoes what Modi told Putin in September, when they met on the sidelines of the summit in Uzbekistan.

It’s less clear if China, whose strategic partnership with Russia is bolstered by a close rapport between leader Xi Jinping and Putin, has come to any shift in stance. Beijing has long refused to condemn the invasion, or even refer to it as such. It’s instead decried Western sanctions and amplified Kremlin talking points blaming the US and NATO for the conflict, although this rhetoric has appeared to be somewhat dialed back on its state-controlled domestic media in recent months.

In sidelines meetings with Western leaders this past week, however, Xi reiterated China’s call for a ceasefire through dialogue, and, according to readouts from his interlocutors, agreed to oppose the use of nuclear weapons in Ukraine – although those remarks were not included in China’s account of the talks.

“While these statements are an indirect criticism of Vladimir Putin, I don’t think they are aimed at distancing China from Russia,” said Brian Hart, a fellow with the China Power Project at the Center for Strategic and International Studies in Washington. “Xi is saying these things to an audience that wants to hear them.”

Russian isolation, however, appears even more stark against the backdrop of Xi’s diplomatic tour in Bali and Bangkok this week.

Though US President Joe Biden’s administration has named Beijing – not Moscow – the “most serious long-term challenge” to the global order, Xi was treated as a valuable global partner by Western leaders, many of whom met with the Chinese leader for talks aimed at increasing communication and cooperation.

Xi had an exchange with US Vice President Kamala Harris, who is representing the US at the APEC summit in Bangkok, at the event on Saturday. Harris said in a Tweet after she noted a “key message” from Biden’s own G20 meeting with Xi – the importance of maintaining open lines of communication “to responsibly manage the competition between our countries.”

And in an impassioned call for peace delivered to a meeting of business leaders alongside the APEC summit on Friday, French President Emmanuel Macron appeared to draw a distinction between Russia’s actions and tensions with China.

While referencing US-China competition and increasing confrontation in Asia’s regional waters, Macron said: “What makes this war different is that it is an aggression against international rules. All countries … have stability because of international rules,” before calling for Russia to come back “to the table” and “respect international order.”

The urgency of that sentiment was heightened after a Russian-made missile landed in Poland, killing two people on Tuesday, during the G20 summit. As a NATO member, a threat to Polish security could trigger a response from the whole bloc.

The situation defused after initial investigation suggested the missile came from the Ukrainian side in accident during missile defense – but highlighted the potential for a miscalculation to spark a world war.

A day after that situation, US Secretary of State Antony Blinken pointed to what he called a “split-screen.”

“As the world works to help the most vulnerable people, Russia targets them; as leaders worldwide reaffirmed our commitment to the UN Charter and international rules that benefit all our people. President Putin continues to try to shred those same principles,” Blinken told reporters Thursday night in Bangkok.

Coming into the week of international meetings, the US and its allies were ready to project that message to their international peers. And while strong messages have been made, gathering consensus around that view has not been easy – and differences remain.

The G20 and APEC declarations both acknowledge divisions between how members voted in the UN to support its resolution “deploring” Russian aggression, and say that while most members “strongly condemned” the war, “there were other views and different assessments of the situation and sanctions.”

Even making such an expression with caveats was an arduous process at both summits, according to officials. Indonesia’s Jokowi said G20 leaders were up until “midnight” discussing the paragraph on Ukraine.

“There was a lot of pressure that came after the G20 reached consensus on their communique,” Matt Murray, the US senior official for APEC said in an interview with CNN after the summit’s close, adding the US had been consistent during lower-level meetings “all year long” on the need to address the war in the forum, given its impact on trade and food security.

“In each and every instance where we didn’t get consensus earlier, it was because Russia blocked the statement,” he said. Meanwhile, “economies in the middle” were concerned about the invasion, but not sure it should be part of the agenda, according to Murray, who said statements released this week at APEC were the result of more than 100 hours of talks, in person and online.

Nations in the groupings have various geo-strategic and economic relationships with Russia, which impact their stances. But another concern some Asian nations may have is whether measures to censure Russia are part of an American push to weaken Moscow, according former Thai Foreign Minister Kantathi Suphamongkhon, speaking to CNN in the days ahead of the summit.

“Countries are saying we don’t want to just be a pawn in this game to be used to weaken another power,” said Suphamongkhon, an advisory board member of the RAND Corporation Center for Asia Pacific Policy. Instead framing censure of Russia around its “violation of international law and war crimes that may have been committed” would hit on aspects of the situation that “everyone rejects here,” he said.

Rejection of Russia along those lines may also send a message to China, which itself has flouted an international ruling refuting its territorial claims in the South China Sea and has vowed to “reunify” with the self-governing democracy of Taiwan, which it’s never controlled, by force if necessary.

While efforts this week may have upped pressure on Putin, the Russian leader has experience with such dynamics: prior to Putin’s expulsion over his annexation of Ukraine’s Crimea in 2014, the Group of Seven (G7) bloc was the Group of Eight – and it remains to be seen whether the international expressions will have an impact.

But without Putin in the fold, leaders stressed this week, suffering will go on – and there will be a hole in the international system.

This story has been updated with new information.