Harry Styles and Olivia Wilde made their debut as Hollywood’s hottest new power couple as they arrived holding hands at his agent’s wedding in Montecito, California, over the weekend.

The Watermelon Sugar singer, 26, made the public display of affection with the actress, 36, who he is working with as the lead male on the film she is directing, Don’t Worry Darling.

The new couple’s appearance marks mother-of-two Olivia’s first public relationship since her split from actor fiancé Jason Sudeikis, 45, in early 2020 after more than eight years together.

Harry looked very dapper in a black suit paired with a frilled white shirt as he held hands with his new love while wearing a black face mask at the San Ysidro Ranch. 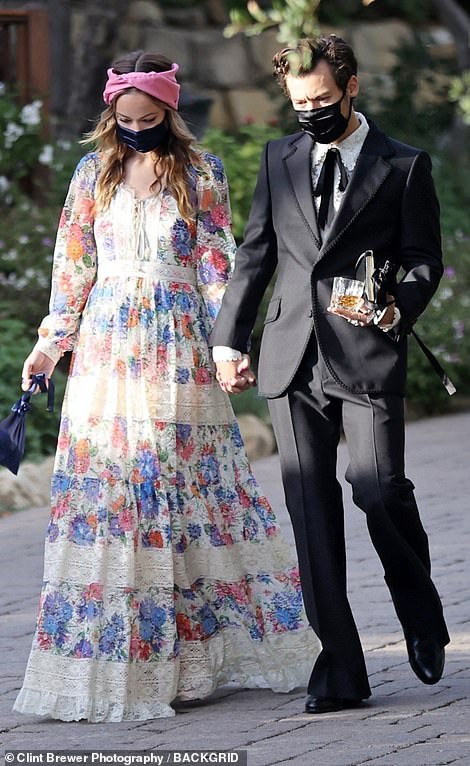 Hollywood’s new power couple! Harry Styles confirmed he is dating US actress and director Olivia Wilde when the pair arrived holding hands at his agent’s wedding in Montecito, CA over the weekend

Olivia stunned in a long boho floral style dress with a pink turban as they left their hotel to join the wedding party, with the actress sporting a matching black face mask.

The pair are said to have ‘grown close’ while filming Don’t Worry Darling in recent weeks, and have even spent time living together at a house near Palm Springs owned by TV host James Corden, who is a long-time friend of Harry’s.

The new couple looked happy and relaxed as they walked hand-in-hand, with Harry holding a tumbler of alcohol as they attended the nuptials of his agent Jeffrey Azoff to Glenne Christiaansen.

A source told MailOnline that earlier in the day, Harry gate-crashed the bride and groom’s official wedding photographs, with the star pictured holding a tumbler of alcohol in his white robe while the couple posed with the suave Brit. 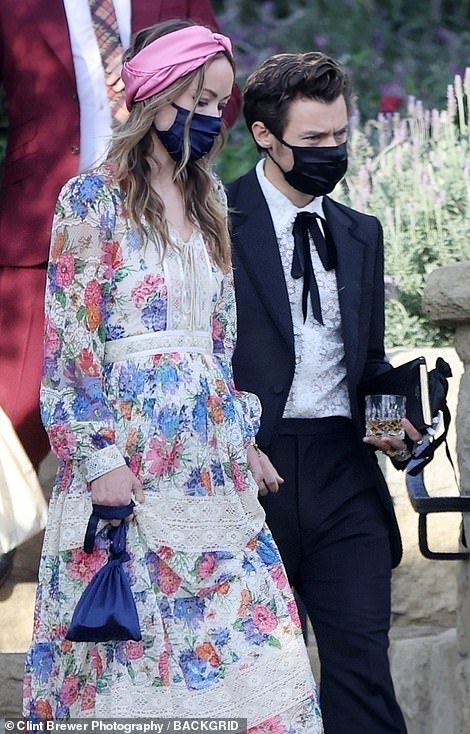 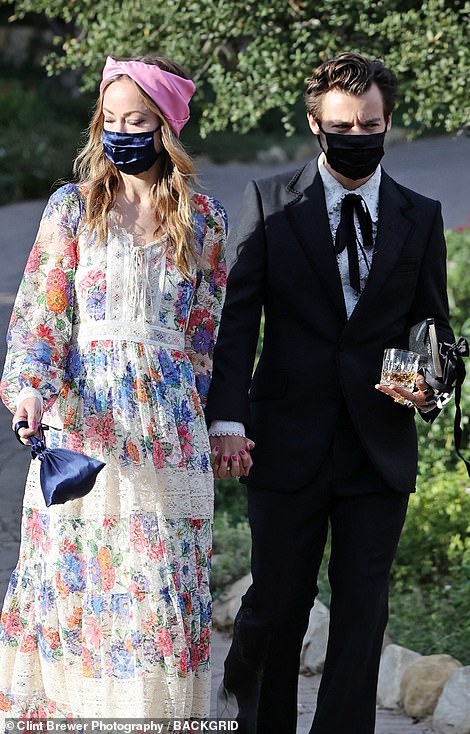 Power couple: The pair looked extremely stylish as they attended the nuptials of his agent Jeffrey Azoff to Glenne Christiaansen 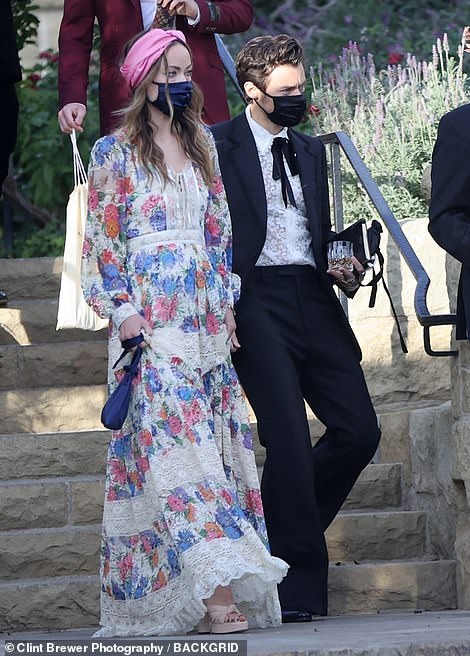 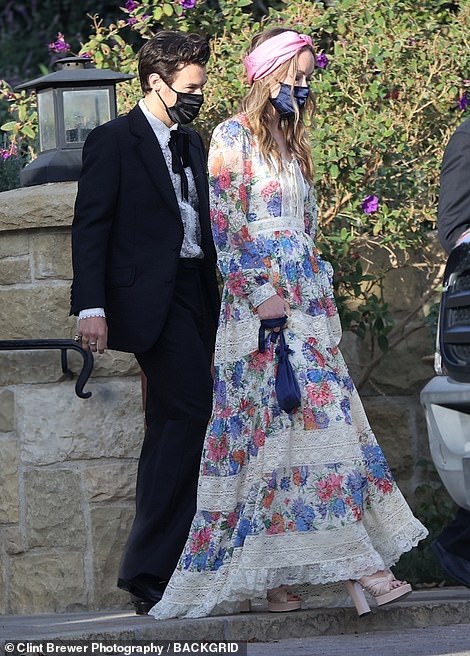 New love: The couple looked comfortable as they attended their first event together hand-in-hand 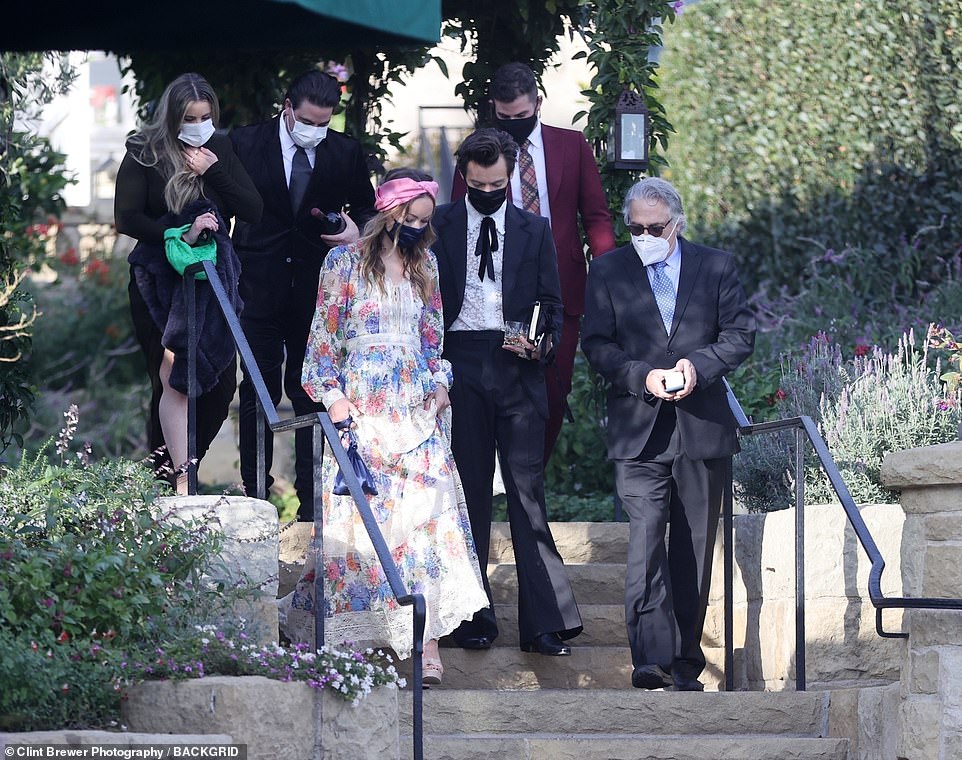 Bond: The Adore You hitmaker stayed close by his new love’s side as they chatted with the rest of the wedding party during the special day

Harry was clearly in playful spirits as he posed up on the lawn in the towelling robe and sliders, joining the stunning wedding party in a fun shoot.

He was seen clutching onto a book – which may have indicated that he conducted the ceremony for his close friends.

The Adore You hitmaker stayed close by his new love’s side as they chatted with the rest of the wedding party during the special day. 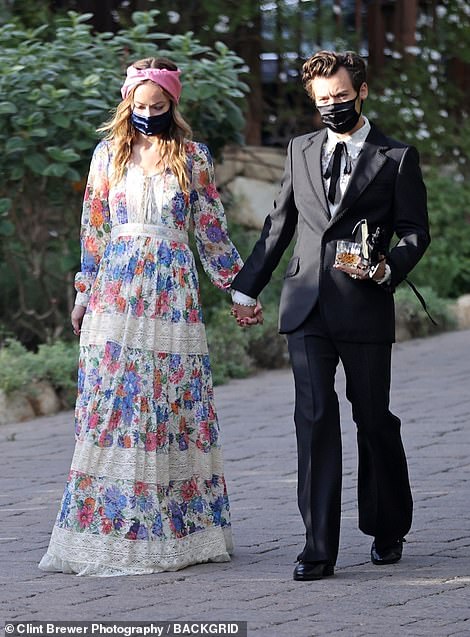 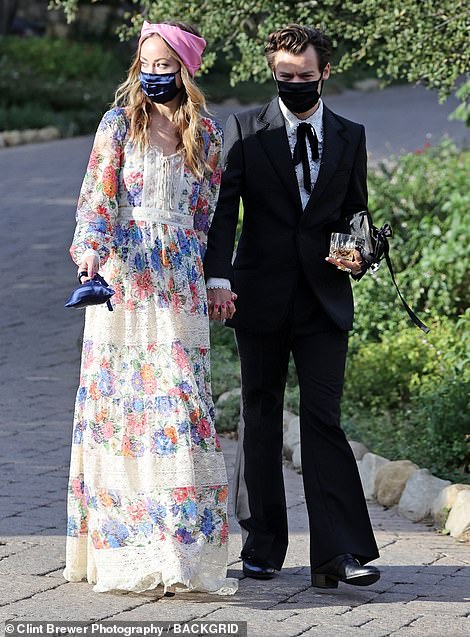 He also lent his vintage white 1966 Mercedes SL230 to the happy couple and Olivia ran errands in his black Range Rover SUV.

In exclusive pictures obtained by MailOnline on Monday, Harry and Olivia were pictured arriving back at Harry’s LA home with luggage in tow, shortly after they were seen driving around in Montecito in California together. 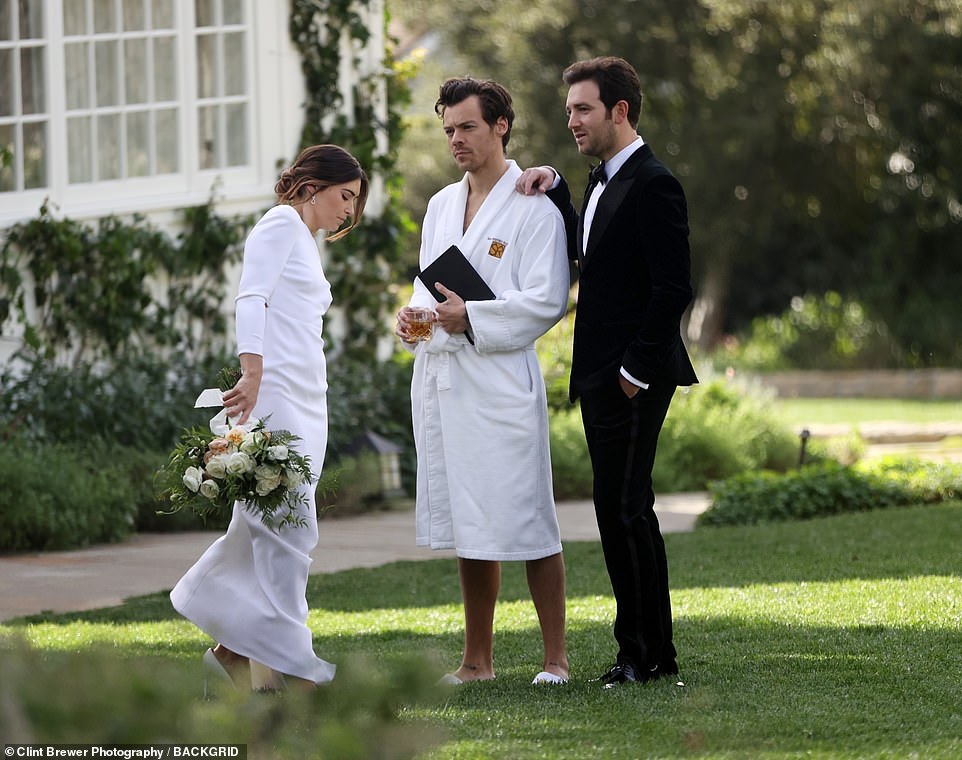 Lol: The singer later donned a white towelling robe and sliders as he crashed the wedding shoot between Jeffrey Azoff and Glenne Christiaansen 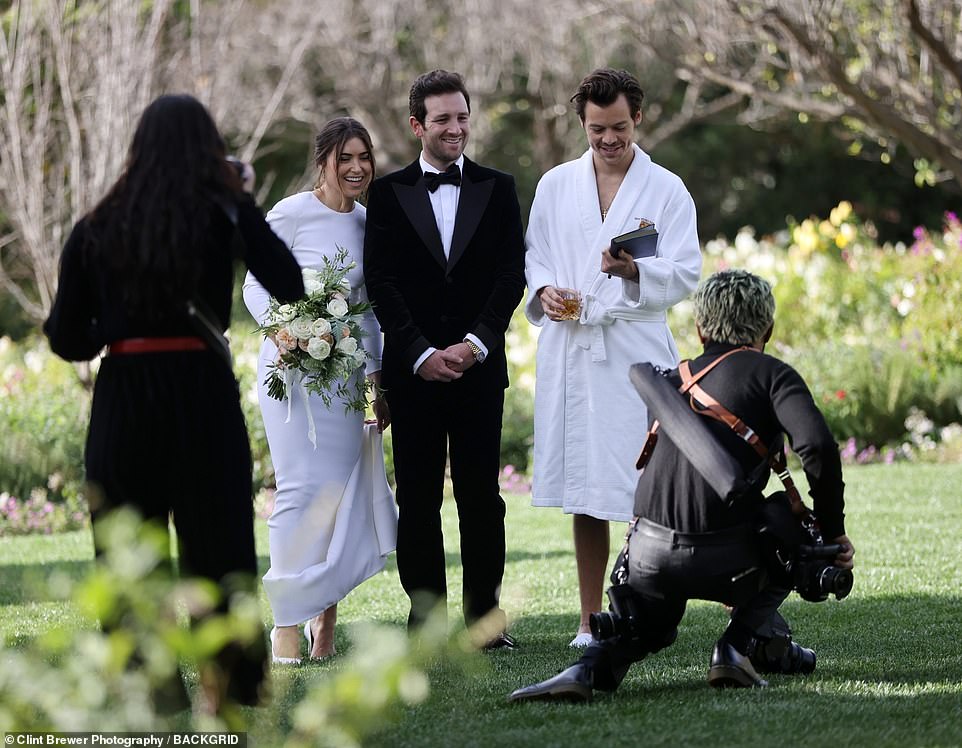 Did he officiate? He was seen clutching onto a book – which may have indicated that he conducted the ceremony for his close friends 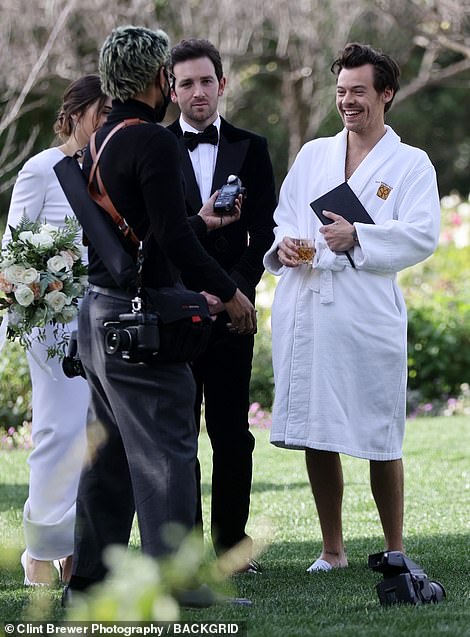 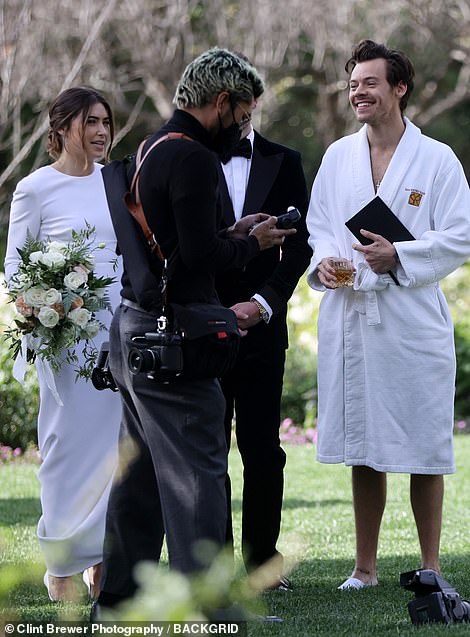 Banter: The One Direction star couldn’t keep the smile off his face as he joined his close pals for the shoot 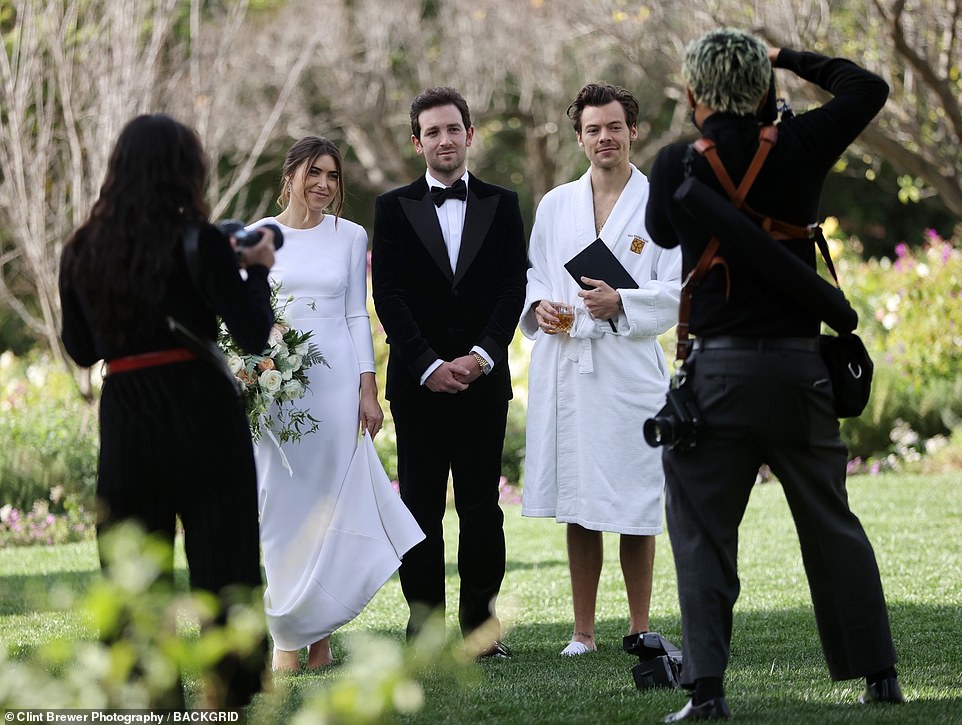 Wedding party: Harry made a comical appearance in his towelling robe as he clutched onto a tumbler of alcohol

And now it has been claimed that Harry’s celebrity pal and The Late Late Show host James, 42, helped the duo keep their romance a ‘secret’ after allowing Harry to stay at his home near Palm Springs during filming where he was ‘able to be alone’ with Olivia.

While a source told the publication that the duo ‘fell for each other’ on the set of her movie Don’t Worry Darling, with the singer reportedly introducing Olivia as his ‘girlfriend’ at the wedding.

A source told the publication: ‘This relationship between Harry and Olivia is very new. Olivia has been directing Harry in the movie in Palm Springs, and there were literally 10 people on the set, because they were strictly adhering to COVID rules.

‘Harry had been staying at James Corden’s house near Palm Springs during filming, and so they were able to be alone and keep their relationship very secret. 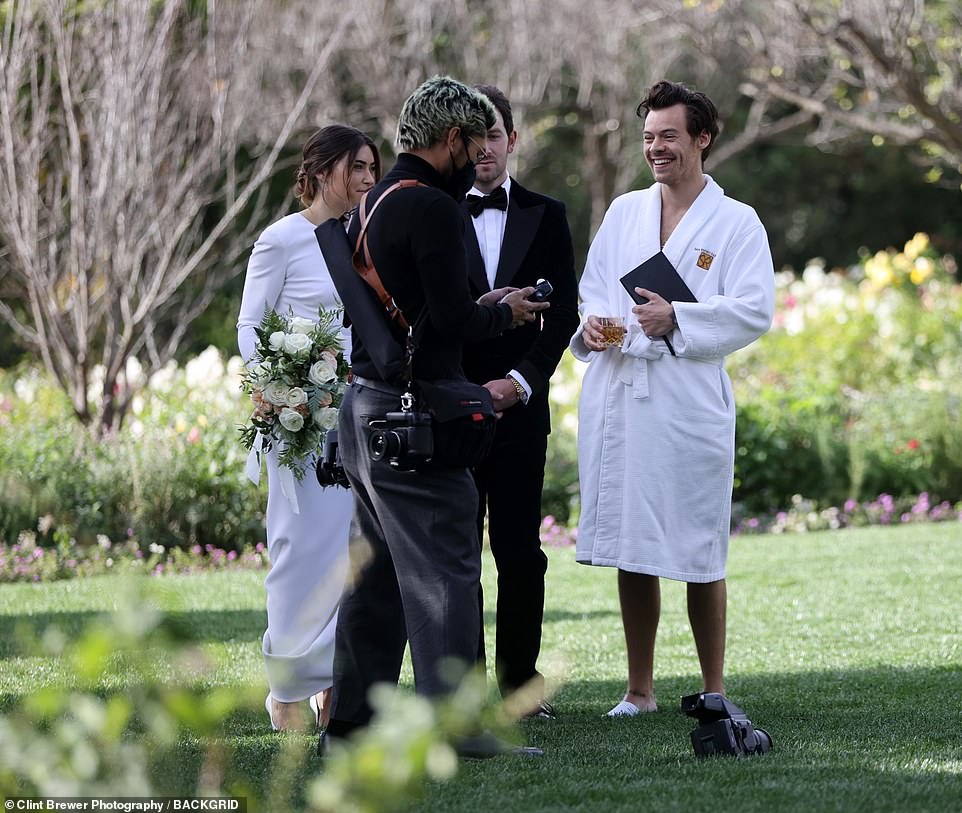 Fun: Harry cracked a few jokes with the wedding photographer as the group prepared to shoot 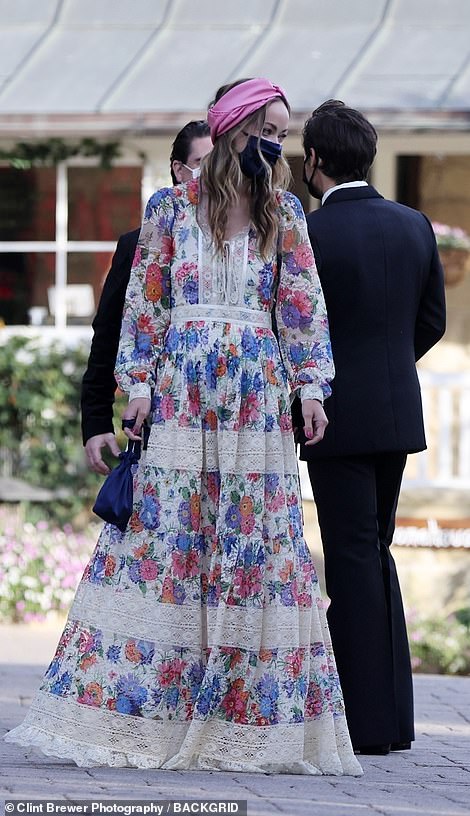 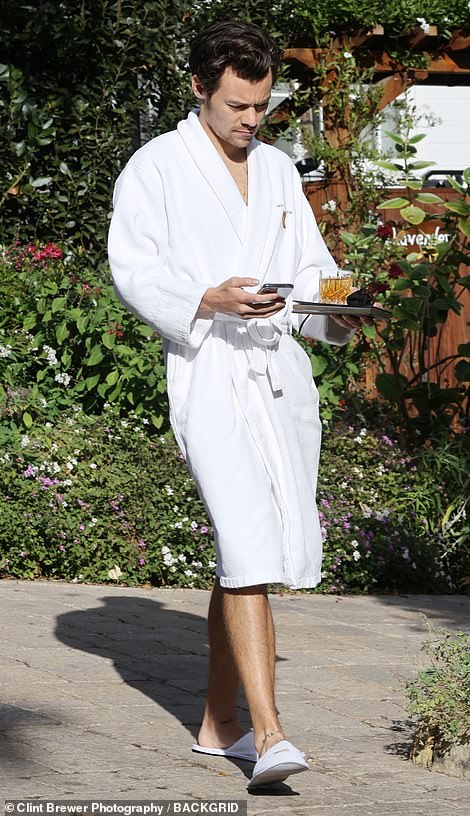 Close: Olivia wowed in her tiered lace floral gown while Harry stripped off to a bath robe 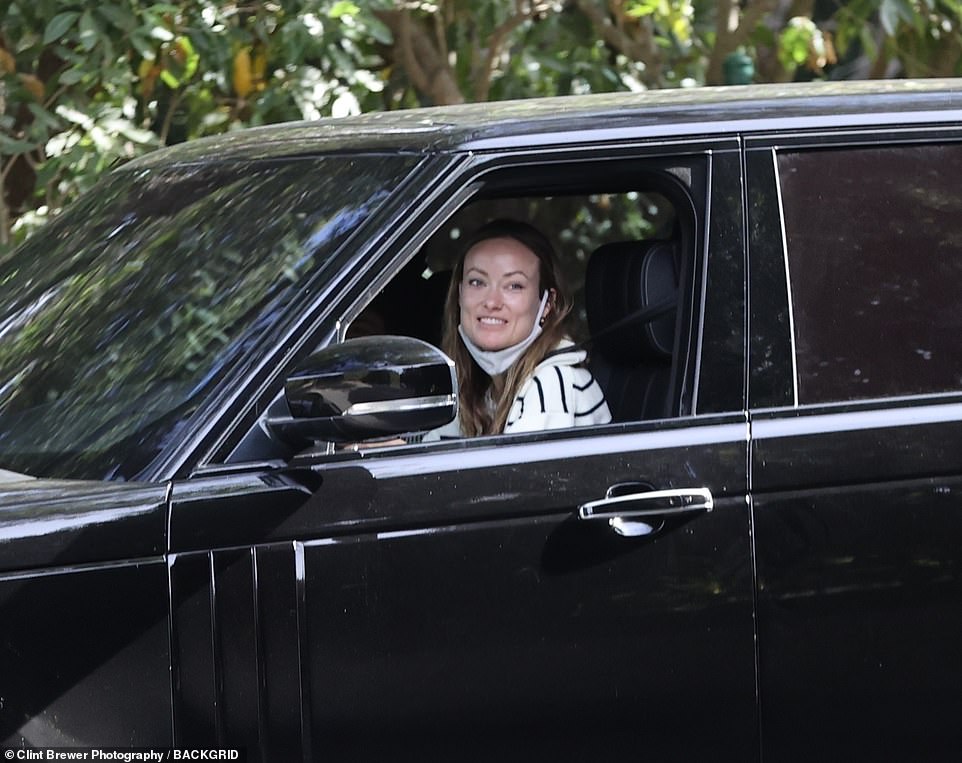 Lots to smile about: Olivia beamed as she was seen running errands in Harry’s black Range Rover 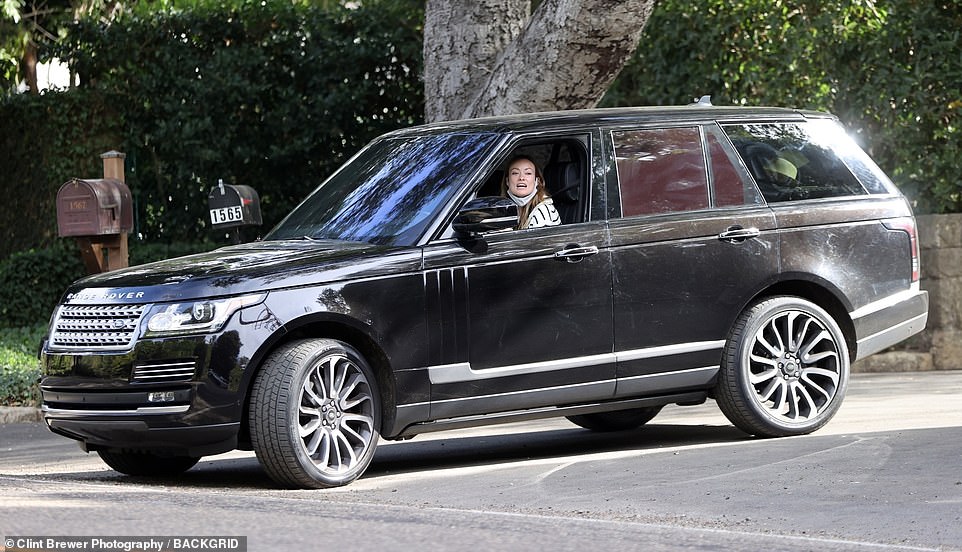 Good times: Olivia looked in good spirits as she drove her new love’s car while wearing a face mask 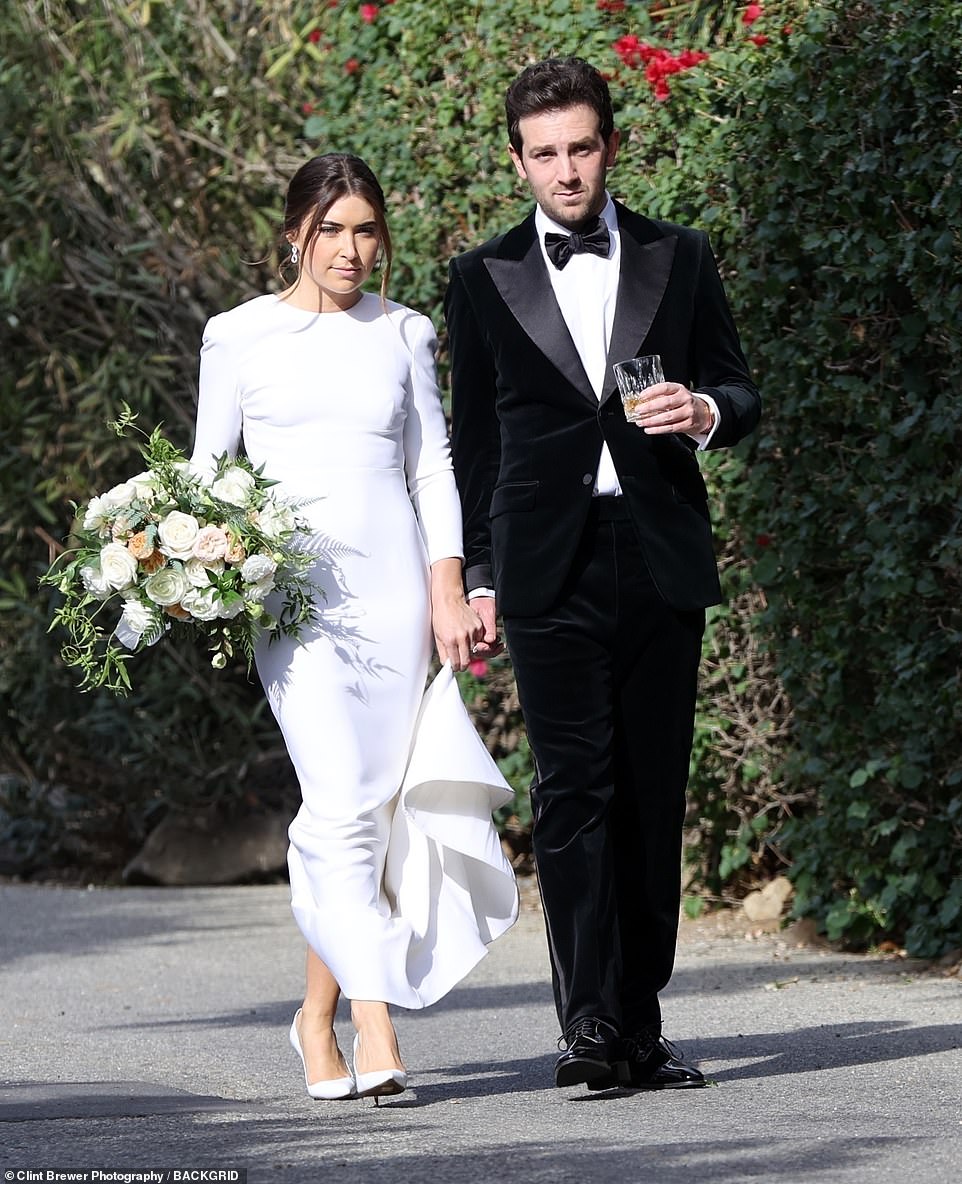 Happy couple:  Harry’s manager and his love looked stunning as they walked hand-in-hand 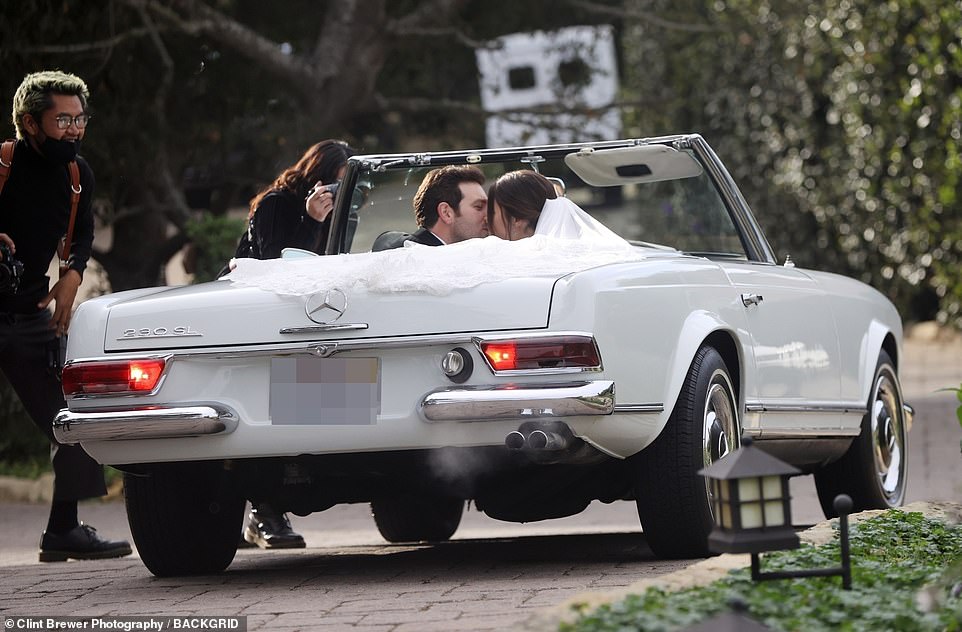 Kiss: The bride and groom were arrived at the wedding venue in Styles’ vintage convertible 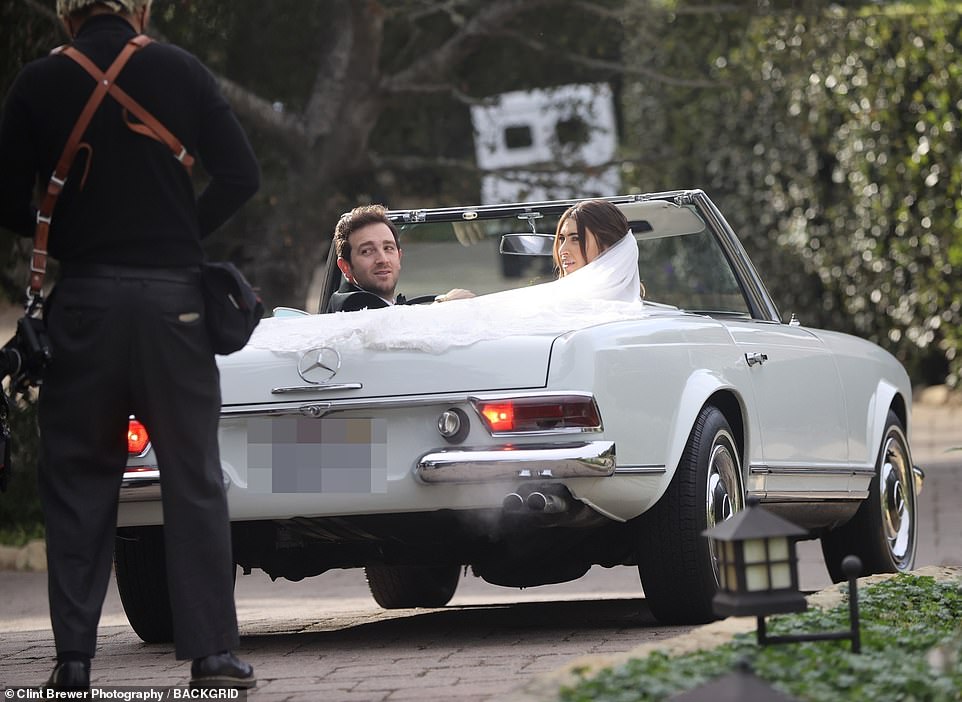 Special moments: The newlyweds looked on as a photographer captured their special day

‘So everyone was really surprised — and rather delighted — when Harry brought Olivia as his date to the wedding, and introduced her as his girlfriend.’

The source added that Harry doesn’t give a ‘f**k* about the 10-year age gap and was ‘openly holding hands and kissing Olivia’. Olivia, Harry and James’ representatives have been contacted for comment.

Olivia was engaged to fiancé Jason Sudeikis, 45, for over eight years but it was reported in November 2020 that they had split earlier in the year, with nothing to suggest that Harry had any involvement in the decision to part.

Us Weekly reported at the time that Olivia and Jason, who are parents to son Otis, six, and daughter Daisy, four, were ‘never going to get married’ and often ‘butted heads’.

An insider claimed: ‘There were arguments and fights over career decisions and where to live. Like most couples, they had disagreements, they were bi-coastal but Jason loved living in New York and Olivia, who was born in NYC, was leaning more toward Los Angeles.’ 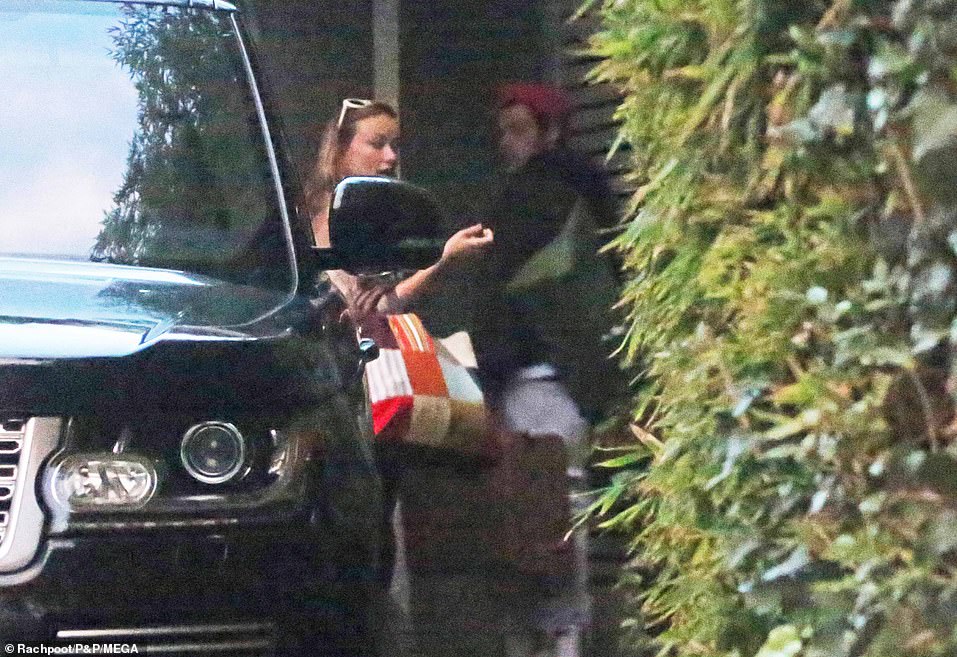 EXCLUSIVE: New couple alert? Harry and Olivia Wilde were pictured arriving back at his LA home on Monday 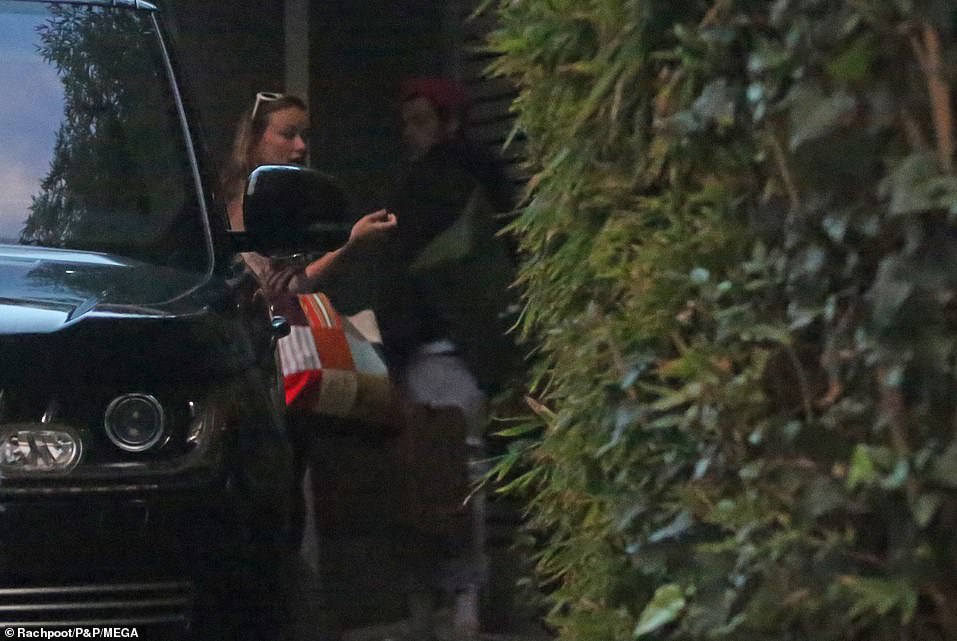 A fan of his: Olivia recently told People that she ‘did a little dance’ when Harry agreed to sign-on to her directorial project 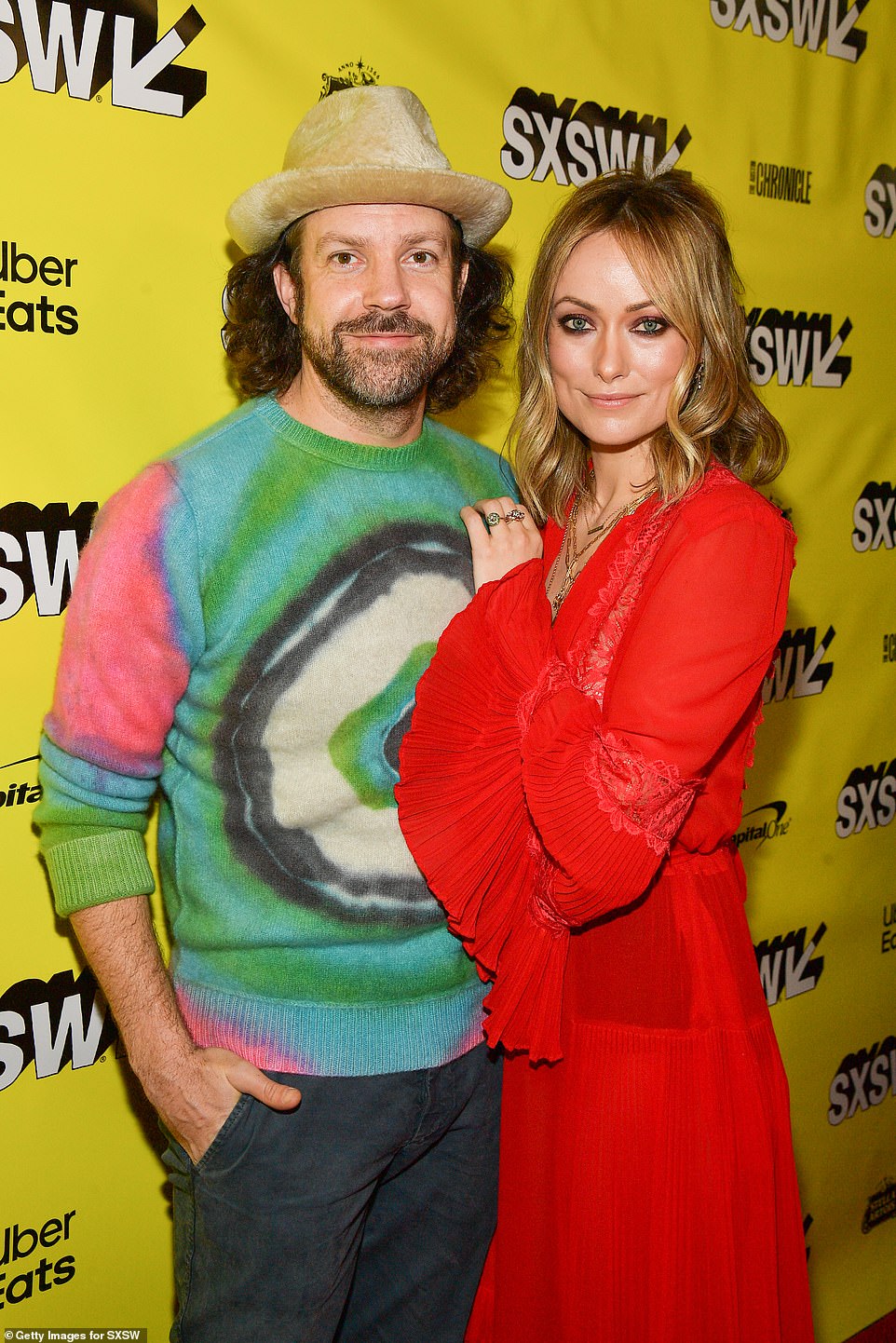 Splitsville: In November, it was revealed that Wilde and her longtime partner Jason Sudeikis had ended their engagement earlier in the year, after almost a decade together; pictured together in March 2019 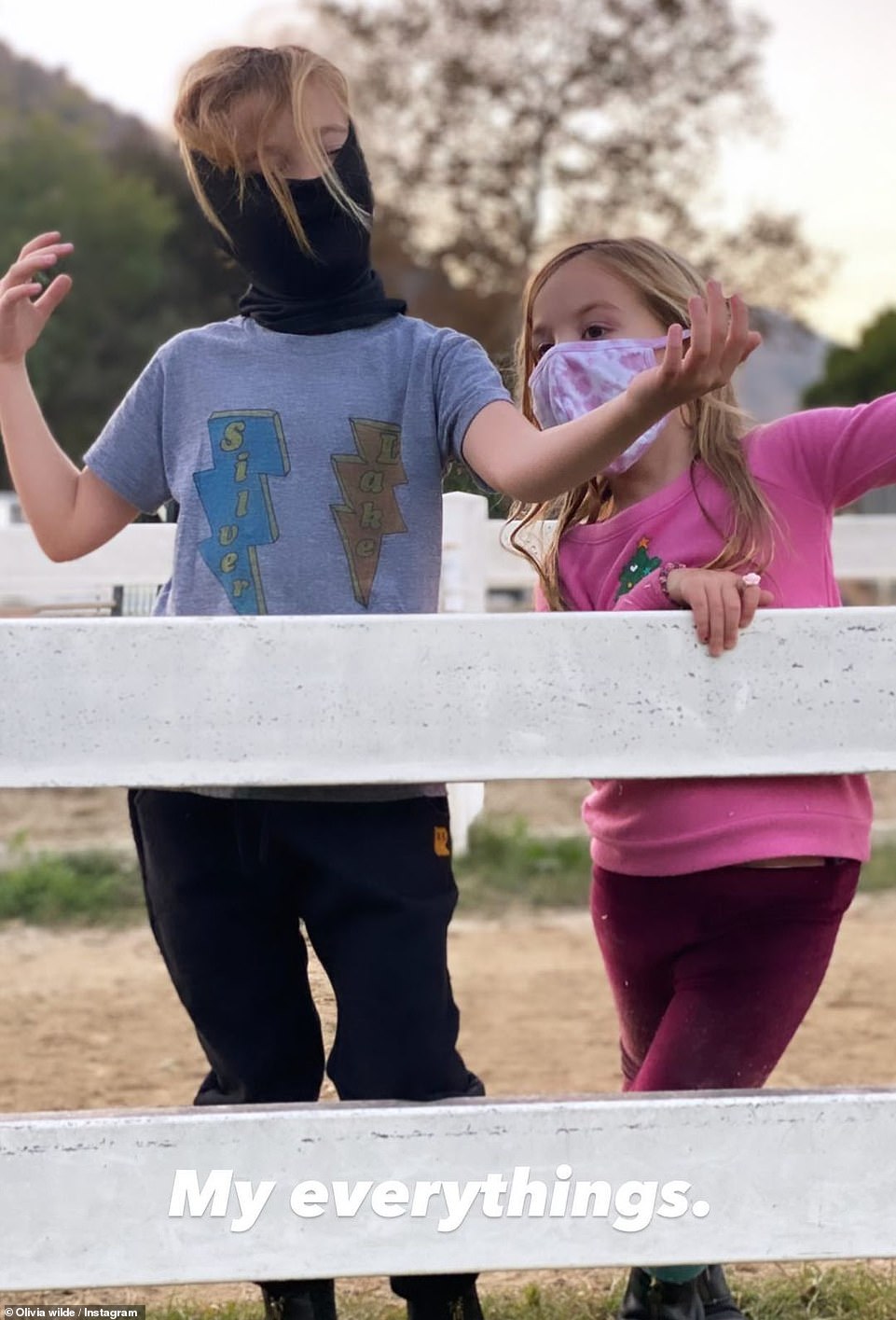 Model Kimberly Stewart, 41 – her dad Rod said: ‘[Harry’s] car was here in the morning. Let’s put it that way’

Singer Taylor Swift, 31 – she is thought to have written I Knew You Were Trouble about him

Made In Chelsea star Caggie Dunlop, 31

Olivia recently told People that she ‘did a little dance’ when Harry agreed to sign-on to her directorial project.

‘[Designer Arianne Phillips] and I did a little victory dance when we heard that we officially had Harry in the film, because we knew that he has a real appreciation for fashion and style. And this movie is incredibly stylistic. It’s very heightened and opulent, and I’m really grateful that he is so enthusiastic about that element of the process—some actors just don’t care.

‘To me, he’s very modern and I hope that this brand of confidence as a male that Harry has—truly devoid of any traces of toxic masculinity—is indicative of his generation and therefore the future of the world.

‘I think he is in many ways championing that, spearheading that. It’s pretty powerful and kind of extraordinary to see someone in his position redefining what it can mean to be a man with confidence.’

The psychological thriller is set in the 1950s, and is Olivia’s second directorial effort after 2019’s critically-acclaimed Booksmart.

It had been reported that Shia had been forced to drop out due to a scheduling conflict, but in November, it was claimed Wilde had fired the Transformers star for violating her ‘zero a**hole policy’ on set.

A source close to the production described the actor as ‘off-putting’ and ‘not an easy guy to work with.’

The actor was recently sued by his ex-girlfriend FKA twigs for physical and sexual assault.

MailOnline reported earlier on Monday that the duo were thought to be dating after ‘growing close’ on the set of their new movie, Don’t Worry Darling.

A source told MailOnline: ‘Olivia and Harry have become close and the pair have been spending a lot of time together in recent weeks. She has been seen visiting his home on several occasions.’

Elsewhere, a source told The Sun: ‘They clicked immediately – they’re both very artistic, passionate people and it was one of those things where straight away everyone could see they had a spark.

‘It’s no surprise something has happened, but now they’re quite open about it and out and about as a couple. They went to a wedding together with a lot of their friends there.

‘Clearly they’re enjoying themselves and the age gap really isn’t a thing. Harry has obviously famously had a thing for older women but he’s just extremely mature himself, you’d never think there was a decade between them.’

In November, Olivia famously defended Harry’s choice to wear a dress on the cover of Vogue, after he became the first man to appear solo on the cover of the fashion bible.

Author Candace Owens, criticised Harry’s choice of clothing and said it made him look weak.

She said: ‘There is no society that can survive without strong men. The East knows this. In the west, the steady feminization of our men at the same time that Marxism is being taught to our children is not a coincidence. It is an outright attack. Bring back manly men.’

Olivia then hit back on Twitter and wrote: ‘You’re pathetic.’ 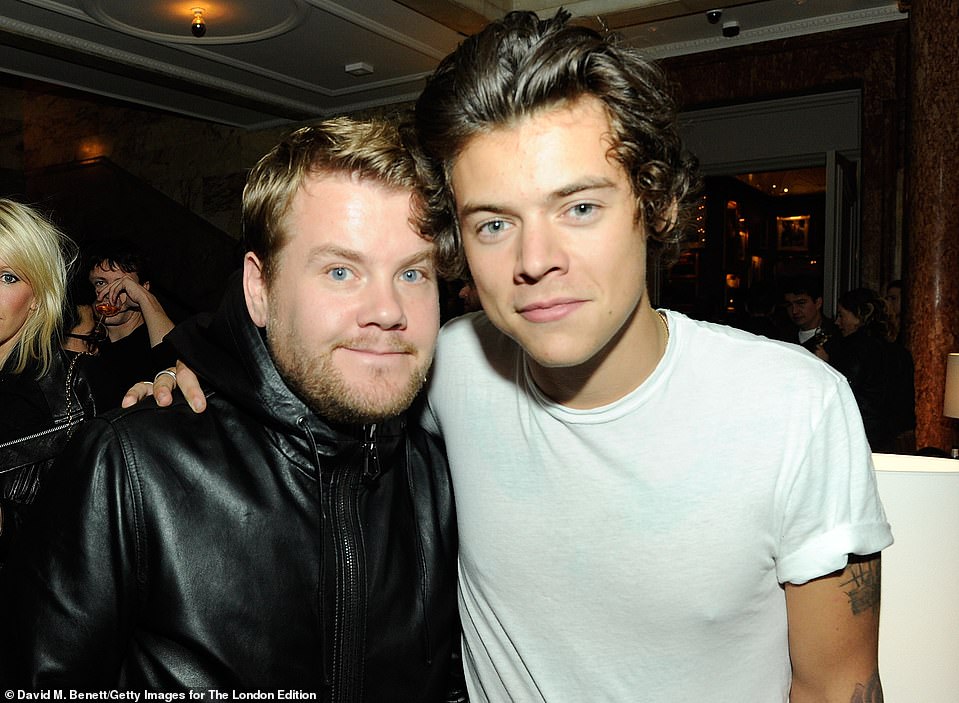 The singer has spoken candidly about his attraction to older women in the past.

Specifically, fans of Styles unearthed a 2012 interview where he admitted that the only woman ‘too old’ for him is any woman ‘older’ than his mother Anne.

The interviewer, speaking on behalf of YOU magazine, was pressing Harry about dating amid One Direction mega fame.

Curious about Styles’ personal preferences, the interviewer asked the star, How old [of a woman] is too old’ to date?

The Watermelon Sugar singer, who is notoriously shy, responded with: ‘Any woman older than my mum Anne — who is 43.’

At the time of the interview in question, Harry was just 18-years-old and had already been previously involved with Love Island host Caroline Flack, who was 32.

Styles was first introduced to Flack during his stint on the X Factor in 2010, where he competed with his former group members Zayn Malik, Liam Payne, Niall Horan, and Louis Tomlinson for the singing competition’s top prize.

The Fall of a Warrior

Shares Price: (as of – Details) The first in a trilogy, this book follows the paths of three separate stories

A Little Birdie Told Me

The Heart of Business: Leadership Principles for the Next Era of Capitalism

Protective DNS for the private sector