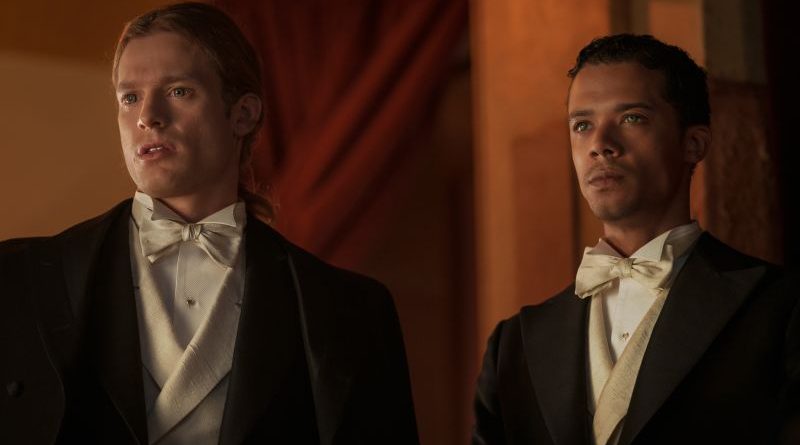 
It’s been nearly half a century since “Interview with the Vampire” was published, leaving its mark on popular culture. Penned by the late Anne Rice, the book became the first of the “Vampire Chronicles,” which include 12 follow-up novels. “Interview” itself was adapted into a 1994 feature film starring Brad Pitt and Tom Cruise, while a loose “Queen of the Damned” adaptation hit theaters in 2002.

Now TV audiences can revisit “Interview with the Vampire” in a new series on AMC Sunday night. Beloved characters like Louis, Lestat and Claudia are back – albeit with some updates to their stories.

“We have these books that have literally been played in everybody’s head a million times, and then there’s this movie that has grafted that onto another generation of people,” said executive producer and writer Rolin Jones, who acknowledged feeling a “push and pull of how to be reverential and how to make sure that you’re not going to be boring for the people that already know these stories quite well.”

Jones and production designer Mara LePere-Schloop spoke with CNN about reimagining “Interview with the Vampire” for television and keeping the adaptation supernatural, sensual and sumptuous, in line with the source material.

Bringing “Interview with the Vampire” to TV involved building a “universe,” said Jones, who kept the other “Vampire Chronicles” in mind while planning everything from character details to the bigger picture. (Lestat, played by Sam Reid, saw some “rewriting” in the later books, as Jones observed – starting with a more fleshed out backstory in the second novel, 1985’s “The Vampire Lestat.”)

The titular interview takes place in the present day; the 1994 film, its screenplay written by Rice, also placed the interview in then-modern times. Like the novel, the new “Interview with the Vampire” is centered on Louis, who shares how he became a vampire with Daniel Molloy, a character first introduced to readers as an unnamed young reporter.

This Daniel, portrayed by Eric Bogosian, is an older seasoned journalist, but he’s essentially “the same guy,” Jones said. The show alludes to an earlier interview between Daniel and Louis from the ’70s – a callback to the novel.

Louis, played by Jacob Anderson, has some new origins. In previous iterations, he was the owner of a plantation near New Orleans in the late 1700s, which is when he met Lestat. The new Louis, still prone to periods of melancholy, guilt and self-loathing, is a Black brothel owner in early 20th century New Orleans when his story begins.

The changes made were partially the result of wanting to focus on a “time period that was as exciting aesthetically as the 18th century was without digging into a plantation story that nobody really wanted to hear now,” said Jones. He noted that the character’s lineage can still be traced back to “plantation money” and that his original occupation did not particularly come up as a point of “self-reflection” in the novels.

Another significant character update involves Claudia – just 5 years old when she was made into a vampire in the novel, though she was portrayed by an 11-year-old Kirsten Dunst in the film. AMC’s adaptation ages Claudia further by making her 14 at the time of her transformation. This doesn’t make her any more prepared for the internal turmoil that sets in.

As actor Bailey Bass said in a featurette shared on the show’s Twitter account, this Claudia has to “deal with the emotions of a 19-year-old, then a 30-year-old, then 40-year-old, while still being stuck in this 14-year-old young body.”

The decision to age Claudia was made in part due to concerns about filming certain scenes, especially those with more “adult” connotations. Child labor laws were another factor.

“If I wanted to make Claudia on this show, I need as many hours of shooting with the actor who plays that as possible,” Jones said. “And if I put anybody that was younger than 18 in there, I would have limited hours.”

For LePere-Schloop, who read Rice’s novels as a teen and credits them somewhat with drawing her to New Orleans, her home of two decades, the changes in the TV series are not antithetical to the author’s work. After Rice died, her assets were donated to an archive at Tulane University in New Orleans, said LePere-Schloop, who met with the archivist while the series was filming.

“Some of the things she was discovering was that Anne was writing short stories and other interpretations of the ‘Chronicles’ where Louis was a woman, or there are other fluidity things happening,” she said. “Even within Anne’s own writing, there’s a history of kind of playing with time, place and person.”

The series was filmed in New Orleans, once Rice’s longtime home and an integral part of “Interview with the Vampire.” Immersing the viewer in the updated setting required a good amount of research.

“We’re now talking about a period of New Orleans that has been talked about a lot, but isn’t very well documented in images or hasn’t been captured in film and television, and that’s the period of Storyville (the red-light district),” LePere-Schloop said. “Culturally, it’s had such an impact on the city.”

As a New Orleans resident, she knew that “when a place is done wrong, you hear it in town.” So she relied on various resources, including the expertise of local historian Richard Campanella.

“He worked with us to capture things that he knew from oral histories and anecdotal stories that he had documented through time of elements of Storyville,” LePere-Schloop said.

The production incorporated New Orleans’ very real history, as well as key locations within the city, in addition to building new sets – like the one for Storyville – to bring viewers into this version of Louis’ and Lestat’s world.

“Anne used the city as research and reference,” LePere-Schloop said. “We were lucky enough to be able to film at the actual house that Anne wrote Lestat’s townhouse to be in the novels. Her inspiration for that house is a living museum and we got to use that as the exterior house.”

Creating the inside of the house, albeit on a stage, was also great fun, she said, noting that the original source of inspiration has “really incredible design details” like a skylight (which was worked into the script) and crown molding.

Different design aesthetics were used to show the passage of time while the vampires remain unchanged. The sets also served as a reflection of the characters, from the art Lestat brings over to New Orleans from Europe to the depressed state the vampires’ home falls into when things go awry.

“It’s an emotional landscape as much as a physical one,” Jones said.

LePere-Schloop wanted to avoid depicting a cliché New Orleans onscreen – and similarly, she wanted to avoid vampire clichés, opting against painting everything “bordello red” or putting Gothic arches everywhere. But for all the historical details adopted by the behind-the-scenes team, there are touches (including added saturation during the final coloring process, Jones said) that feel less natural.

While thinking up the palette for the show, LePere-Schloop turned to a book from her childhood – “The Rainbow Goblins” – which contained “beautiful, oversaturated” illustrations and helped her land on a more dynamic backdrop. The world Louis and Lestat occupy is “sexier” and “vivacious,” she said, compared to early depictions of vampires in film, which tended to be understated and “crumbling.”

Even with some changes to the original storylines, the “Interview with the Vampire” team did not ignore the source material – rereading and “seeing what was in the crevices and the cracks” helped them make the show, Jones said.

There are subtle references to characters from later novels and even a quick shoutout to Rice’s Mayfair witches (also the subject of an upcoming AMC series). Characters that did not appear in the film do appear here. And – perhaps the most important detail for the diehard fans – Lestat and Louis are lovers, in a move that takes the famed subtext of Rice’s earlier vampire novels and simply turns it into text.

What “Interview with the Vampire” hinted at in the ’70s was progressive for its time, Jones said, adding that by the “later books, it’s as if there was this great romance that was never really written, but we all kind of agree it happened.”

While Jones did not sugarcoat some of the more toxic “dish-throwing” aspects of the vampires’ relationship, he saw tremendous opportunity in how he could depict it in an updated adaptation.

Between Rice’s writings and the 1994 film, which has its fans and critics alike, Jones acknowledged that the series’ main cast “had big ghosts behind them.” But he praised Anderson – who he pointed out is in nearly every scene – and Reid for their stamina, as well as the range of their performances.

As far as the viewers are concerned?

“I’d like them to be surprised. For those who know it really well and love it, I want them to stick with it for seven (episodes) and if they’re still angry, that’s cool,” Jones said. “But hopefully, I made something exciting and thrilling for them.”