Labour paid tribute to the Queen with a flawlessly observed minute’s silence and a rendition of God Save the King today.

Leader Keir Starmer hailed the late monarch’s commitment to her country as he urged delegates at its party conference to emulate her drive.

Before leading singing of God Save the King Sir Keir told the audience in Liverpool: ‘Let’s turn our collar up and face the storm, keep alive the spirit of public service she embodied and let it drive us towards a better future.’

The silence and anthem were both well-observed in the hall with no booing, despite criticism of the decision to honour the monarchy.

But there was even applause in the hall as the singing came to an end.

Delegates were helped out with lyrics for the anthem printed on cards. 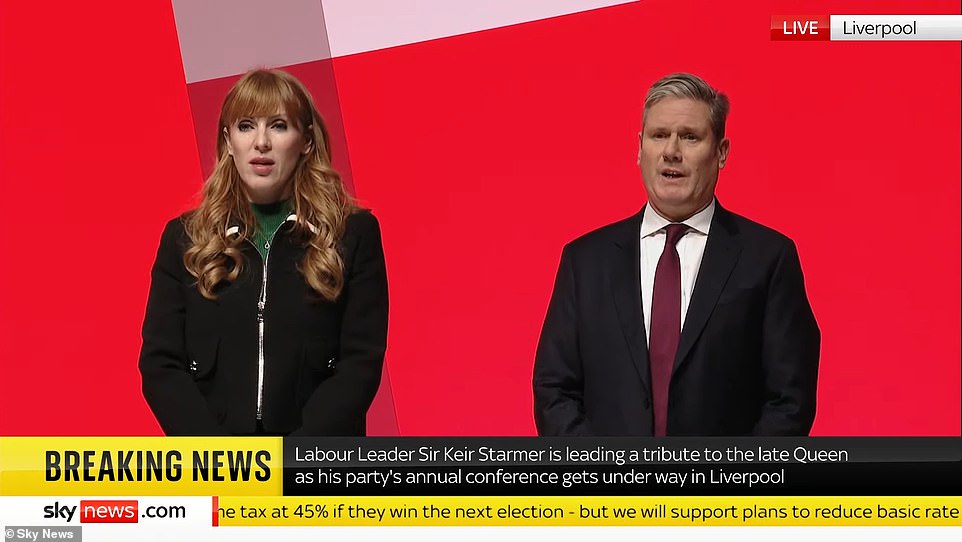 Leader Keir Starmer hailed the late monarch’s commitment to her country as he urged delegates at its party conference to emulate her drive. 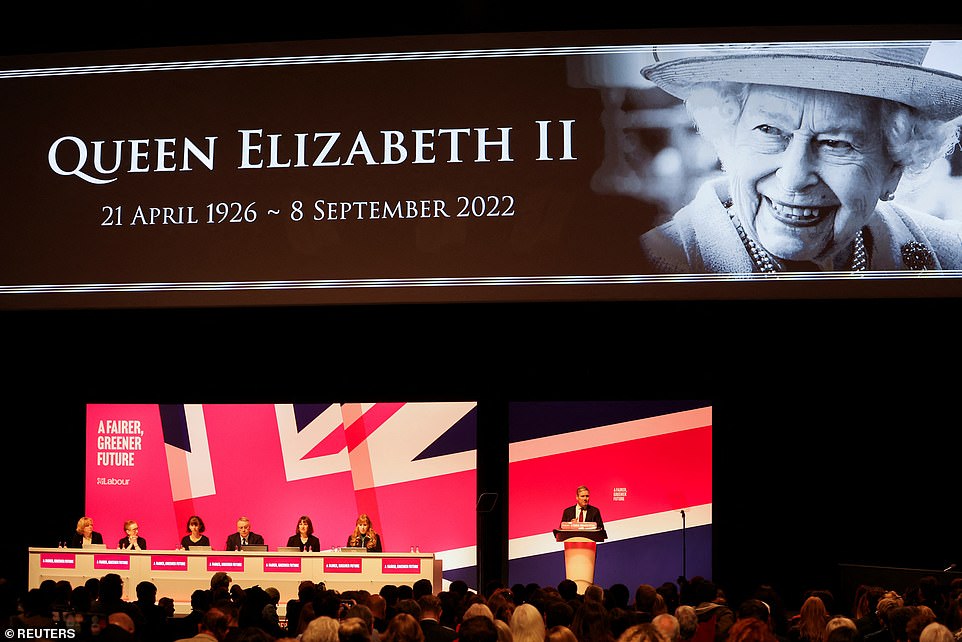 Before leading a rendition of God Save the King Sir Keir told the audience in Liverpool: ‘Let’s turn our collar up and face the storm, keep alive the spirit of public service she embodied and let it drive us towards a better future.’ 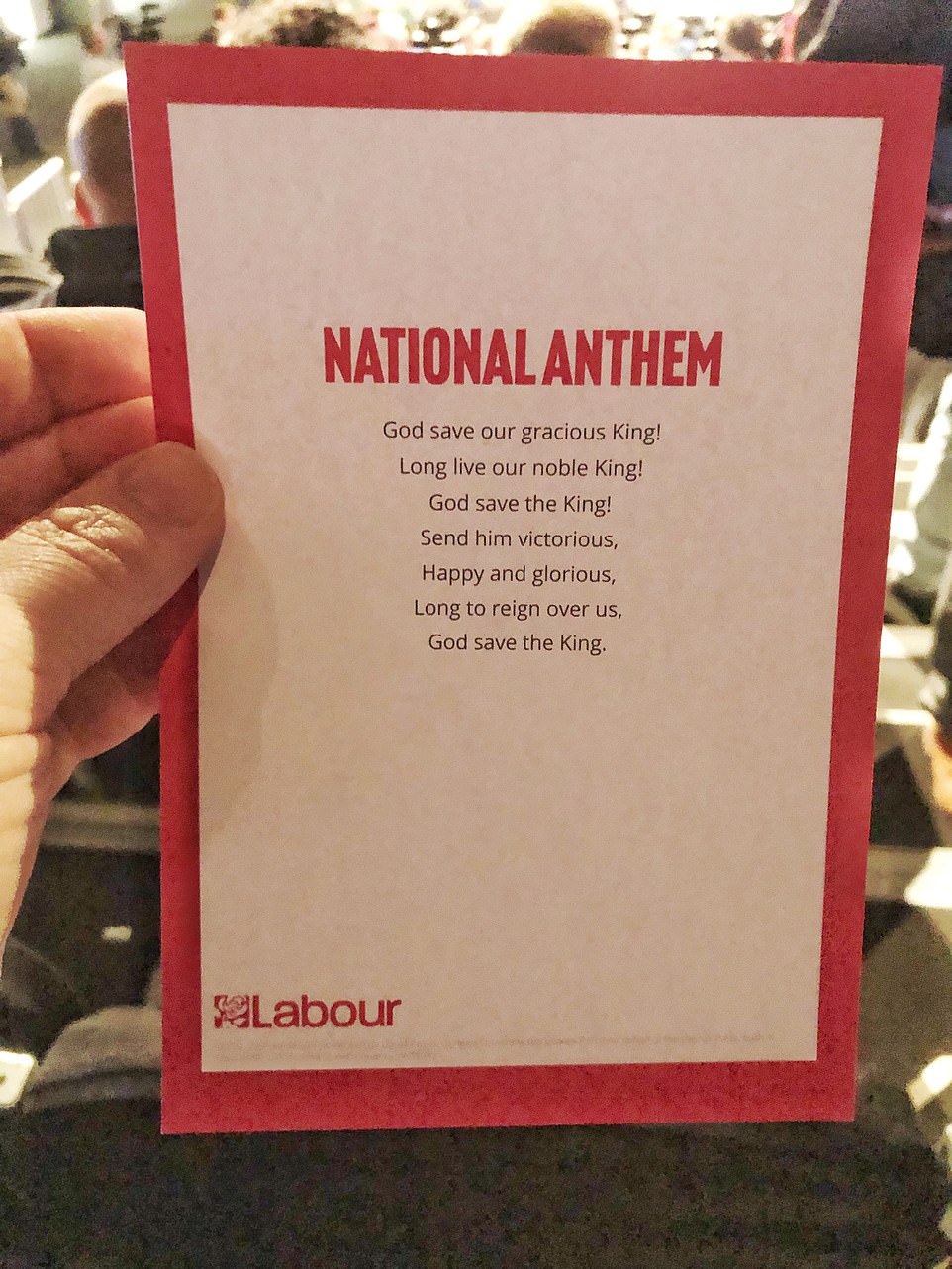 Delegates were helped out with lyrics for the anthem printed on cards.

Starmer: It’s reasonable’ for workers to strike over pay as costs rise

Sir Keir Starmer has said it is ‘reasonable’ for people to expect wages that take account of the rising cost of living, as he said he supports workers’ right to strike.

The Labour leader said he can ‘quite understand’ how people are driven to take industrial action as they struggle to pay their bills.

He told the BBC’s Sunday With Laura Kuenssberg programme the ‘single most important thing’ he can do for those striking is to ‘usher in a Labour government’.

He has banned frontbenchers from joining picket lines, with Sam Tarry sacked as shadow transport minister in July for giving unauthorised media interviews from an RMT demonstration.

Sir Keir said it is ‘reasonable’ to expect that wages are set that take account of the mounting cost of living.

Asked if he would support people going on strike if they do not get wage rises in line with inflation, he told Ms Kuenssberg: ‘When people go on strike, it is a last resort at the end of negotiations.

‘I can quite understand how people are driven to that, they’re really struggling to pay their bills, the negotiations have not succeeded, and they’ve taken as a last resort the decision to go on strike.

‘And I support the right of individuals to go on strike, I support the trade unions doing the job that they are doing in representing their members.

Keir Starmer and party bosses took the decision for the national anthem to be sung at the Labour conference for the first time in its history following the death of the Queen earlier this month, and the accession of King Charles III.

Speaking from the conference stage today, Sir Keir struck a totally different tone, saying it ‘still feels impossible to imagine a Britain without her’.

Sir Keir said: ‘Because our Queen’s devotion to Britain was underpinned by one crucial understanding – she knew that the country she came to symbolise is bigger than any one individual or institution…

‘For 70 years, Queen Elizabeth II stood as head of our country, but, in spirit, she stood amongst us.’

However, Jeremy Corbyn argued the move was unnecessary. He said on Nick Robinson’s Political Thinking podcast: ‘They’ve never done it before, there’s never been any demand to do it.

‘We don’t as a country routinely go around singing the national anthem at every single event we go to.

‘We don’t sing in schools, we don’t have the raising of the flag as they do in the USA and other places.

‘We are not that sort of, what I would call, excessively nationalist.’

Dozens of republicans including a Labour MP used the gathering on Merseyside to demand reform including abolition of the monarchy as they warned against a future with a ‘white, privilege male’ as head of state for the next century – just weeks after the Queen‘s death.

At a fringe event at the Labour Conference in Liverpool last night, guests including Richard Burgon heard activists claim that power by ‘accident of birth’ is ‘incompatible’ with the Labour Party‘s democratic values as they made the case for a British republic.

The discussion mainly focused on the future of the monarchy, a topic which has split the party in recent days as Corbynites slammed Keir Starmer’s decision for the national anthem to be sung at the conference.

Mr Richards drew a laugh from the audience as he opened his own address by welcoming them to ‘naughtiest fringe meeting’ of the conference.

Burgon, a member of Labour’s Left-wing Socialist Campaign Group, hit back at criticisms earlier this week that it was ‘terribly inappropriate’ to discuss at the conference whether the monarchy should be abolished in the wake of the Queen’s passing.

He said: ‘In 1993 the law was changed so that the monarch wouldn’t pay inheritance tax on private assets… as opposed to state assets – so private assets.

‘I think these are still legitimate matters of inquiry. And people who respect the Queen’s service… can still hold these views. It’s not an insult to anybody. It’s a legitimate discussion in a democratic society.’

Earlier Sir Keir vowed to bring back the 45p tax band for the UK’s richest people, after accusing the Tories of ‘taking the p***’ out of voters with their massive tax-cutting mini-Budget.

The Opposition Leader insisted that the top rate paid by those earning more than £150,000 a year would return under his government.

But he also vowed to honour Kwasi Kwarteng’s decision to cut the basic rate of income tax from 20p to 19p.

The cap on bankers’ bonuses was also removed by Chancellor Kwarteng as he made the biggest change to the tax system in 50 years.

But after he removed the 45p top rate of income tax paid by those earning £150,000 and over he was accused of helping only the super-wealthy at the expense of the rest.

He and Prime minister Liz Truss have defended their ‘trickle down’ approach, insisting the whole economy will benefit.

He said the Government’s ‘driving ideology’ is now to ‘make the rich richer and do nothing for working people’.

‘It’s not trickle down, it’s taking the piss.’

Greater Manchester mayor Andy Burnham called on Labour to campaign to reverse all the cuts to income tax ahead of the next election, telling Sky the Budget was a ‘flagrant act of vandalism’.