Mourners determined to pay their respects to Her Majesty have brought their dogs and loved ones’ ashes to see the Queen‘s coffin, while veterans have made moving final salutes to the late monarch.

One member of the public has been spotted with a dog wrapped under her arm inside Westminster Hall at the Queen’s lying-in-state on Friday morning.

Captured on Daily Mail TV’s live feed of the Queen’s lying-in-state at 10.40am, a woman can be seen holding what appears to be a chihuahua, as she queues to pay her respects to the late monarch.

Yesterday, a parliamentary source told the Daily Mail that officials have stopped six mourners from entering Westminster Hall after they were caught trying to smuggle in their pet dogs hidden under coats.

While pets are not permitted inside Westminster Hall, guide dogs are allowed inside. 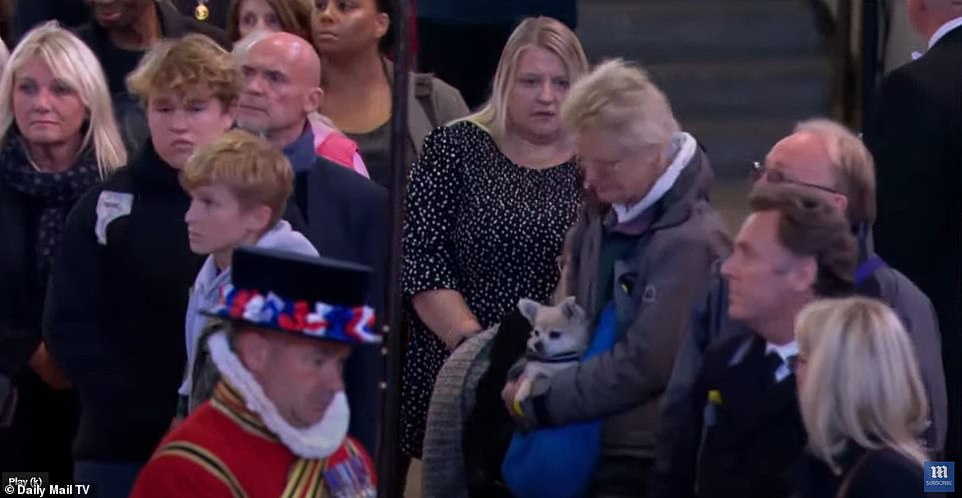 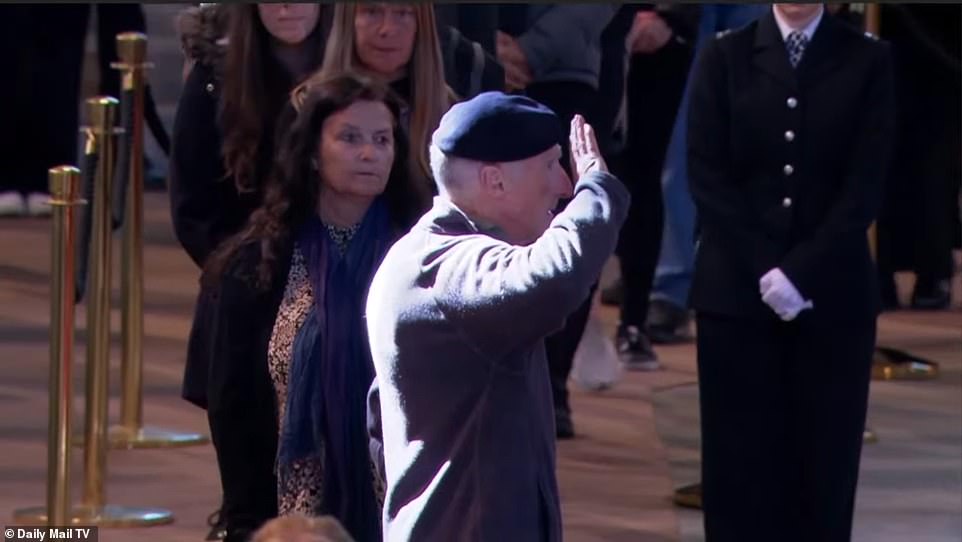 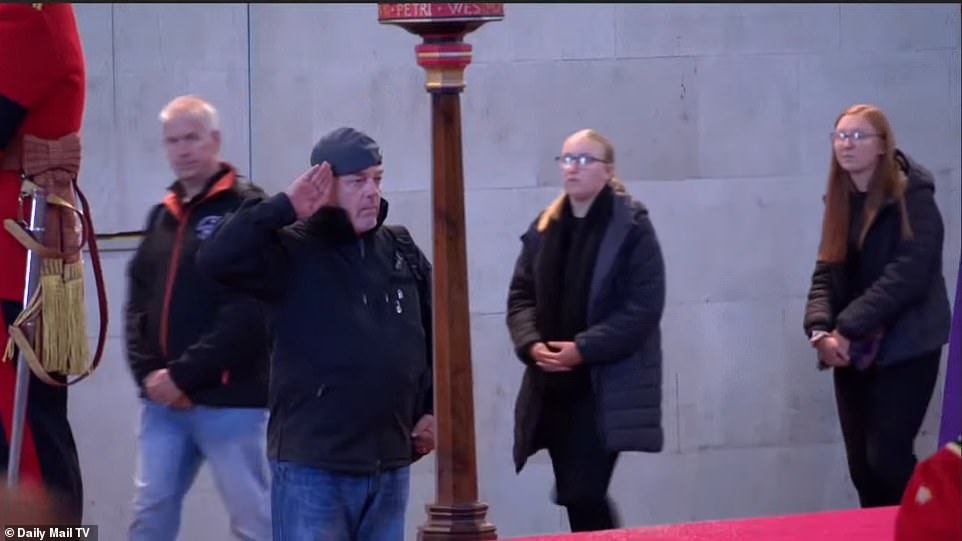 Veteran salutes Queen’s coffin on Friday morning as he pays his respects to the late monarch, who died last Thursday

Meanwhile, a veteran was seen making a heartbreaking final salute to the Queen’s coffin as he paid his respects to Her Majesty on Friday Morning.

The gentleman, dressed in military uniform, was seen making the gesture of respect inside Westminster Hall after queuing for hours to pay tribute to the Queen, who died last Thursday at her Balmoral estate, aged 96.

Another mourner queuing through the night told the BBC how she brought her mother’s ashes to pay her respects to Queen Elizabeth II.

A woman named Mandy travelled from Manchester with her family to queue to see her Majesty lying-in-state.

She said they had started queuing at around 8pm yesterday and paid their respects at around 4.45am. 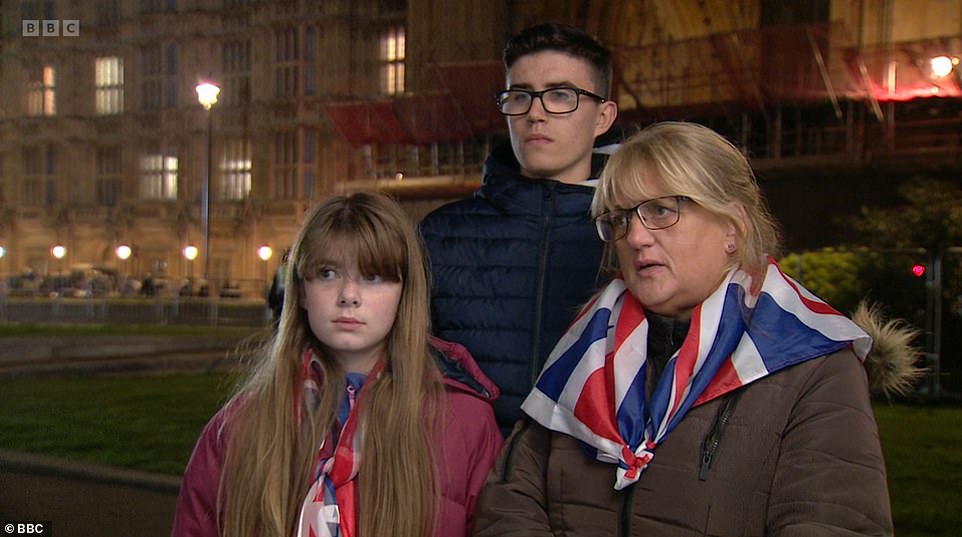 Describing herself as from ‘royalist family’, Mandy said she decided to bring her late mother’s ashes with her because she was ‘really patriotic’.

Having attended Charles and Diana’s wedding and the Queen Mother’s funeral with her own mother, Mandy said she ‘vowed’ that she would attend the Queen’s funeral.

She said: ‘I brought my mothers ashes actually, because we lost my mum as well two years ago and she was really patriotic, a royalist.’ 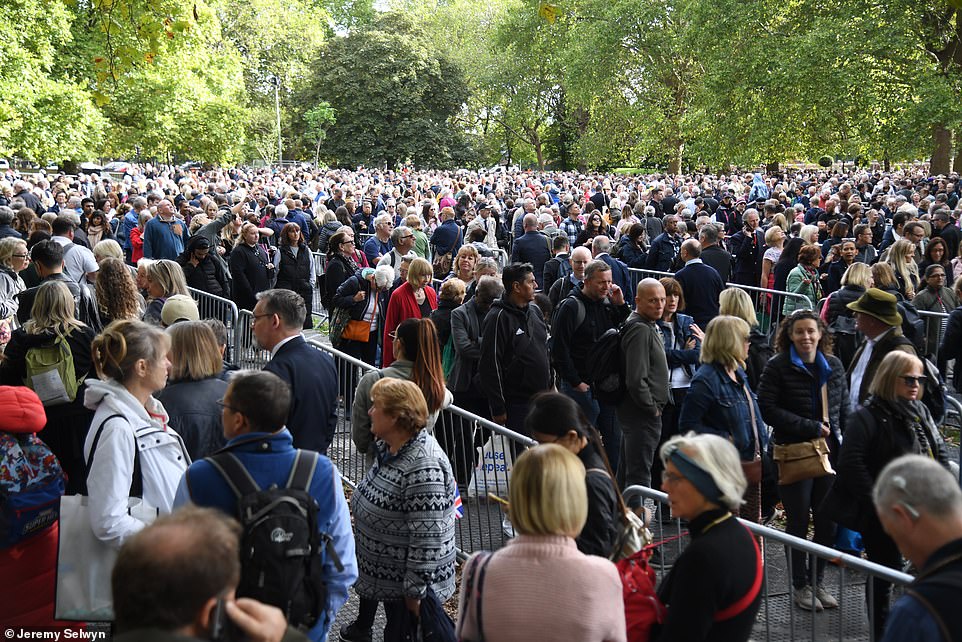 The ‘queue of all queues’: Access to the queue in Southwark Park was closed after it reached capacity on Friday morning

On Friday morning, the queue for the Queen’s lying-in-state, dubbed ‘the Elizabeth line’, was shut for at least six hours after reaching nearly five-miles long. 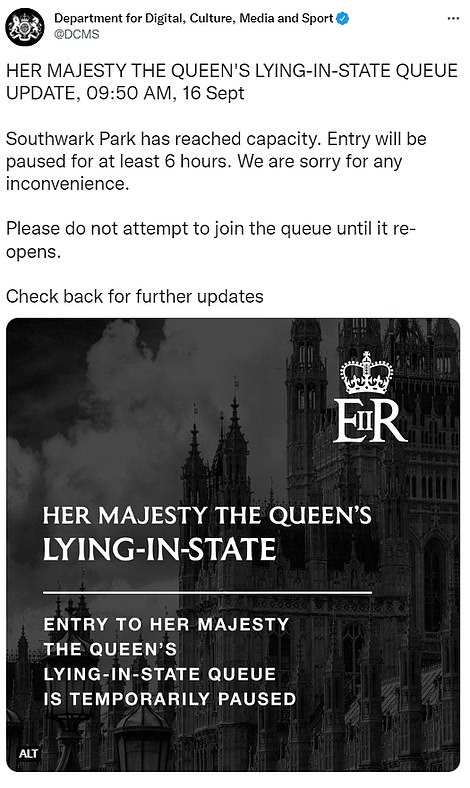 Those at the end of the queue would have at least a 14-hour wait to pay their respects to Her Majesty, according to the Department for Culture, Media and Sports’ queue live tracker.

The Government said in an update just before 10am: ‘Southwark Park has reached capacity.

‘Entry will be paused for at least 6 hours. We are sorry for any inconvenience. Please do not attempt to join the queue until it re-opens.’

On the third day of the Queen’s lying-in-state, those stood in the queue which hugged the south bank of the River Thames were told the wait time had swelled to ‘at least 14 hours’ and 4.9 miles to Southwark Park in Bermondsey.

The Government had warned just an hour earlier: ‘If the park reaches capacity, entry to the queue will be paused. If you have not yet set off to join, please consider waiting until numbers have reduced.’

And the line for people to go through Westminster Hall has now been doubled to two lines each side of Her Majesty’s casket amid concerns over delays.

Since the early hours of yesterday morning, officials have directed mourners to form two columns either side of the late Queen’s coffin, adorned with the Imperial Crown, so twice as many people can pay their respects at once.

The huge volume of people wanting to say farewell to Her Majesty led to the decision to double the rate of flow, ensuring as many who wished to pay their respects were able.

The queue – which people have been joining since Monday and which opened on Wednesday at 5pm – is now taking mourners more than half a day to complete but many have been saying the long wait was worth it.

Mourners said there was ‘breathtaking’ serenity awaiting them in Westminster Hall where ‘you could hear a pin drop’ in the silence.