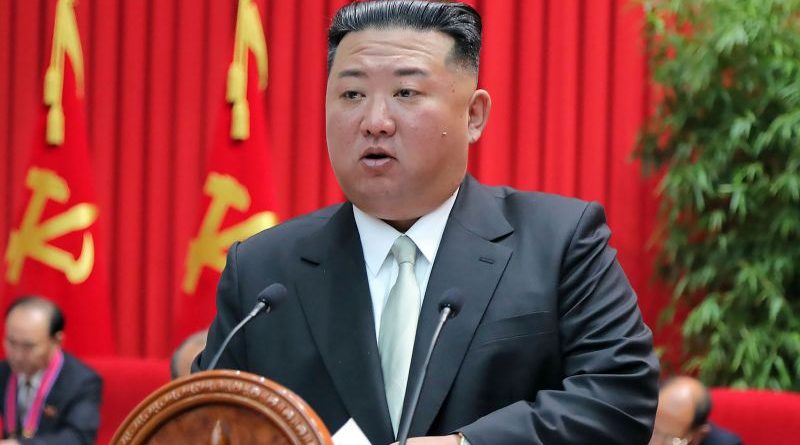 
North Korea launched an intercontinental ballistic missile (ICBM) on Friday, the second missile test by the Kim Jong Un regime in two days, in actions condemned as a brazen violation of multiple UN resolutions by the US and its allies.

The ICBM was launched around 10:15 a.m. local time from the Sunan area of the North Korean capital Pyongyang, and flew about 1,000 kilometers (621 miles) east, South Korea’s Joint Chiefs of Staff (JCS) said.

Japanese Prime Minister Fumio Kishida said it likely fell in Japan’s exclusive economic zone (EEZ), about 210 kilometers (130 miles) west of the Japanese island of Oshima Oshima, according to the Japan Coast Guard. It did not fly over Japan.

“I want to restate that we cannot accept such actions,” he said.

The Japanese government will continue to collect and analyze information and provide prompt updates to the public, he said. So far, there have been no reports of damage to vessels at sea, Kishida added.

The ICBM reached an altitude of about 6,100 kilometers (3,790 miles) at Mach 22, or 22 times the speed of sound, according to the JCS, which said details were being analyzed by intelligence authorities in South Korea and the US.

On Friday morning US Vice President Kamala Harris gathered on the sidelines of the APEC summit with leaders from Japan, South Korea, Australia, New Zealand, and Canada to condemn the launch, in a previously unscheduled media briefing.

“I have asked this group of allies and partners to come together to join us in condemning North Korea’s long range ballistic missile launch,” she said. “I’ve also asked them to join in so that we as allies and partners can consult on next steps. This conduct by North Korea most recently is a brazen violation of the multiple UN Security resolutions. It destabilizes security in the region and unnecessarily raises tensions.”

The President said Seoul will strengthen its alliance with Washington, and bolster its defense posture and cooperation over security with the US and Japan.

It added that North Korea cannot gain anything through continuous provocations, while warning that sanctions against the North will only be strengthened, resulting in Pyongyang’s further international isolation.

Friday’s missile was about 100 kilometers short in altitude and distance compared to Pyongyang’s missile test on March 24, which recorded the highest altitude and longest duration of any North Korean missile ever tested, according to a report from the Korean Central News Agency (KCNA) at the time. That missile reached an altitude of 6,248.5 kilometers (3,905 miles) and flew a distance of 1,090 kilometers (681 miles), KCNA reported.

Calling the launch a “significant provocation and a serious act of threat,” the JCS warned the North of violating the UN Security Council’s resolution and urged it to stop immediately.

The Misawa Air Base issued a shelter in place alert after the firing of the missile, according to US Air Force Col. Greg Hignite, director of public affairs for US Forces Japan. It has now been lifted and the US military is still analyzing the flight path, he said.

US President Joe Biden has been briefed on the missile launch and his national security team will “continue close consultations with Allies and partners,” National Security Council spokesperson Adrienne Watson said in statement Friday.

“The door has not closed on diplomacy, but Pyongyang must immediately cease its destabilizing actions and instead choose diplomatic engagement,” Watson said. “The United States will take all necessary measures to ensure the security of the American homeland and Republic of Korea and Japanese allies.”

Friday’s launch comes one day after Pyongyang fired a short-range ballistic missile into the waters off the east coast of the Korean Peninsula, and issued a stern warning to the United States of a “fiercer military counteraction” to its tighter defense ties with South Korea and Japan.

It’s the second suspected test launch of an ICBM this month – an earlier missile fired on November 3 appeared to have failed, a South Korean government source told CNN at the time.

The aggressive acceleration in weapons testing and rhetoric has sparked alarm in the region, with the US, South Korea and Japan responding with missile launches and joint military exercises.

Leif-Eric Easley, associate professor of International Studies at Ewha Womans University in Seoul, said North Korea is “trying to disrupt international cooperation against it by escalating military tensions and suggesting it has the capability of holding American cities at risk of nuclear attack.”

North Korea has carried out missile tests on 34 days this year, sometimes firing multiple missiles in a single day, according to a CNN count. The tally includes both cruise and ballistic missiles, with the latter making up the majority of North Korean test this year.

There are substantial differences between these two types of missiles.

A ballistic missile is launched with a rocket and travels outside Earth’s atmosphere, gliding in space before it re-enters the atmosphere and descends, powered only by gravity to its target.

A cruise missile is powered by a jet engine, stays inside Earth’s atmosphere during its flight and is maneuverable with control surfaces similar to an airplane’s.

Ankit Panda, senior fellow in the Nuclear Policy Program at the Carnegie Endowment for International Peace, said that while he wouldn’t see Friday’s presumed ICBM launch “as a message, per se,” it can be viewed as part of North Korea’s “process of developing capabilities Kim has identified as essential for the modernization of their nuclear forces.”

The US and international observers have been warning for months that North Korea appears to be preparing for an underground nuclear test, with satellite imagery showing activity at the nuclear test site. Such a test would be the hermit nation’s first in five years.

Jeffrey Lewis, director of the East Asia Nonproliferation Program at Center for Non-proliferation Studies, said the ICBM test was designed to validate parts of North Korea’s missile program, something that Kim Jong Un has vowed to do this year.

He dismissed any political or negotiating message from the tests.