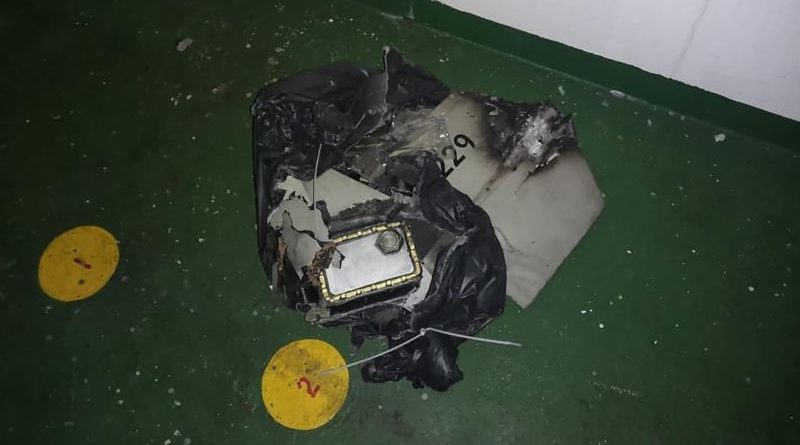 
CNN has obtained exclusive images showing the damage and debris from a self-detonating drone attack against an oil tanker off the coast of Oman on Tuesday evening.

The two images, provided by a Western defense official, show a hole in what appears to be the hull of the Liberian-flagged, Singaporean-owned and Israeli-affiliated Pacific Zircon, as well as what appear to be the crushed remains of a drone next to evidence markers. The charred remains of the drone show the numbers 229 on the side.

CNN cannot independently verify the authenticity of the photos.

On Wednesday, American and Israeli officials pointed the finger of blame at Iran – identifying the drone as a HESA Shahed 136 similar to the Iranian-made self-detonating drones used by Russia in Ukraine.

The incident did not cause any injuries, according to Eastern Pacific Shipping, the vessel’s operating company. Nor did it cause major damage, according to a US military official.

“We are in communication with the vessel and there is no reports of injuries or pollution. All crew are safe and accounted for,” Eastern Pacific Shipping said Wednesday. “There is some minor damage to the vessel’s hull but no spillage of cargo or water ingress.”

A UK Royal Navy frigate, the HMS Lancaster, offered assistance to the crew of the Pacific Zircon after being made aware of the incident, a UK Ministry of Defense spokesperson said in a statement.

On Wednesday, US National Security Advisor Jake Sullivan said Iran was likely behind a drone attack, saying in a statement that while there is “is no justification for this attack” it is “the latest in a pattern of such actions and broader destabilizing activities.”

“Upon review of the available information, we are confident that Iran likely conducted this attack using a UAV, a lethal capability it is increasingly employing directly and via its proxies throughout the Middle East and proliferating to Russia for use in Ukraine,” Sullivan said.

He warned the action threatens international shipping, commerce and the “freedom of navigation through this crucial waterway.”

US Central Command also said on Wednesday that a “Shahed-series one-way attack drone” hit the vessel.

“This unmanned aerial vehicle attack against a civilian vessel in this critical maritime strait demonstrates, once again, the destabilizing nature of Iranian malign activity in the region” General Michael “Erik” Kurilla, commander of US Central Command, said in a statement.

An Israeli official told CNN on Wednesday that the drone attack was “an Iranian provocation in the Gulf” linked to the World Cup, which kicks off in Qatar on Sunday.

“It’s not an attack against Israel,” the official said. “It’s the same thing they usually do in the Gulf, trying to disrupt stability and mainly influence World Cup events.”

The official asked not to be named due to the sensitivity of the situation.

The weapon and the target fit the pattern of attacks linked to Iran in the past. On July 30, 2021, an armed drone attacked a cargo ship named Mercer Street off the coast of Oman, killing two. That ship was associated with an Israeli billionaire.

Soccer teams and supporters from 32 nations, including Iran, are gathering in Qatar ahead of the World Cup.