Prince William and Kate Middleton chose £50,000-a-year Lambrook because they want their children to have a ‘different kind of schooling’, a royal expert has revealed.

The Duke and Duchess of Cambridge, both 40, took their ‘excited’ children to Lambrook school in Windsor yesterday, with the couple strolling into the grounds hand-in-hand with George, nine, Charlotte, seven, and Louis, four.

And appearing on Lorraine this morning, Sunday Times Royal Editor Roya Nikkhah spoke about the couples motivation for selecting the school.

She said it was ‘a very different set-up’ from the schools the family had attended in London, saying: ‘The Cambridge’s want their children to have a different type of schooling.’ 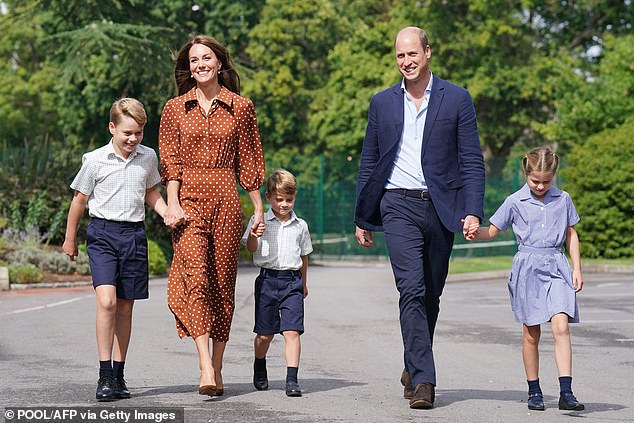 Prince William and Kate Middleton, both 40, chose £50,000-a-year Lambrook because it offers a ‘different type of schooling’ where children can ‘connect with the outdoors’, a royal editor has claimed

She said: ‘It was a lovely first day at school for them…it’s the first time all three of them have been at the school together.

‘This is quite different, it’s all part of the big move to Windsor. It’s an amazing school.

‘It’s a very different set up. There’s a lot of emphasis on the outdoors, there’s animals there, a miniature golf course, peacocks that roam free throughout this school.

‘It’s a very special, lovely school where children are encouraged to get outdoors. 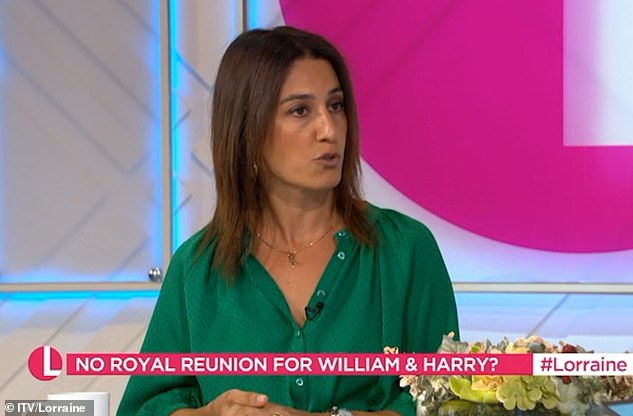 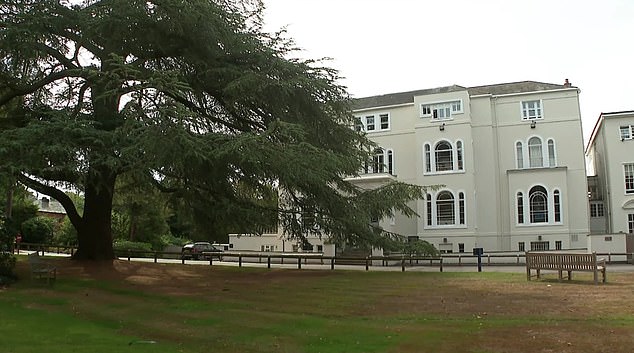 A shot of Lambrook school, a £50,000 private school near Windsor which has polo lessons and farming as extra-curricular activities

‘That’s part of the plan for William and Kate for their children to get outdoors and have a more normal life.’

Lorraine replied: ‘Not an ordinary school then?’

The Duke of Cambridge quipped about his ‘gang’ of children during a chat with staff members of Prince George, Princess Charlotte and Prince Louis‘ new £50k-a-year school as he dropped his children off for their first day yesterday.

Prince William joined Kate Middleton, both 40, to take their ‘excited’ children to Lambrook school in Windsor yesterday, with the couple strolling into the grounds hand-in-hand with George, nine, Charlotte, seven, and Louis, four.

The children attended a ‘settling in afternoon’ – an annual event to welcome new starters and their families to the school on the day before the new school term begins. The trio will officially start school today. 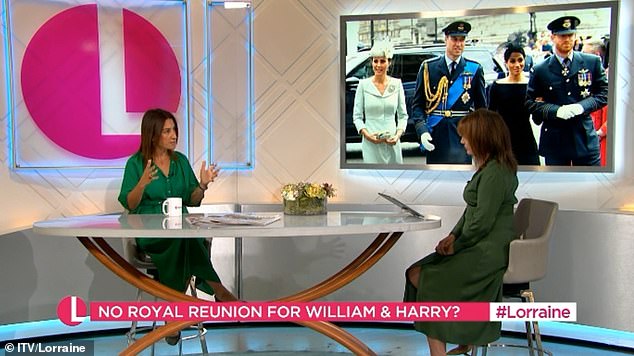 William went on to user them up the steps of the large white 19th-century country mansion, while Prince George, Charlotte and Louis all said they are ‘excited’ to be starting. A source said the Cambridge children were ‘particularly excited’ to be going to the same school for the first time.

The Duchess was the picture of elegance in a £245 brown polka dot dress by Rixo for the occasion, which she paired with matching tan coloured heels. She wore her soft brown locks in her signature bouncy blow dry style, and kept her makeup and jewellery neutral for the occasion.

The Duke and Duchess are beginning a new life in the country away from the goldfish bowl of their official London residence Kensington Palace which is being seen as a bid to put their children first and give them more freedom.

William and Kate had been known to have set their heart on outdoorsy prep school Lambrook, with its 52 acres of grounds, where fees will cost the couple in excess of £50,000 a year in total for their three youngsters. 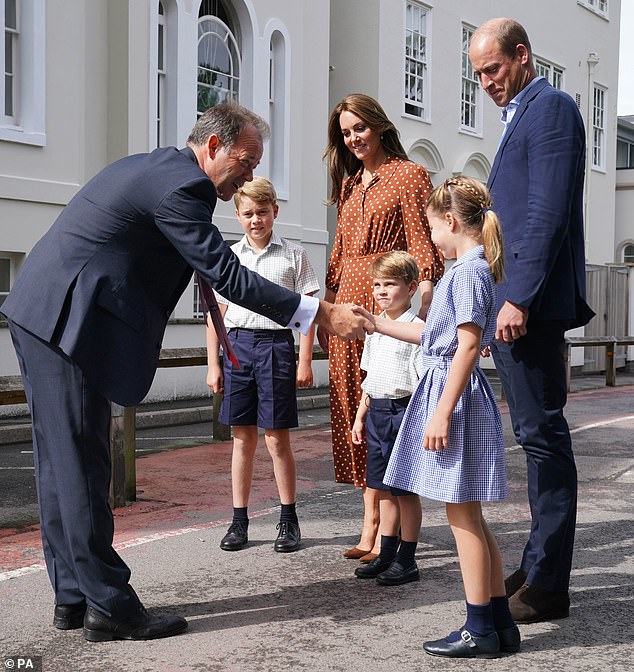 The Duke of Cambridge quipped he was dropping off his ‘gang’ of children during a chat with the headmaster of Prince George, Princess Charlotte and Prince Louis’ new £50k-a-year school yesterday – ahead of their first day 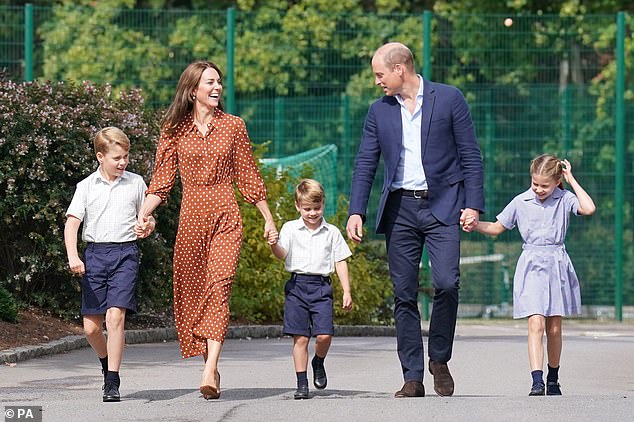 The Duke and Duchess, both 40, yesterday dropped off their children Prince George, Princess Charlotte and Prince Louis at the same new school after moving their family to Windsor for the next major phase of their life

Elsewhere in the segment, Roya and Lorraine commented on Prince Louis’ ‘spirited’ attitude.

Roya said: ‘As we’ve seen from the Jubilee, Louis is a very spirited little boy.’

Lorraine agreed saying: ‘Yes, and I think this is something a lot of parents can relate to.’

The school’s website says: ‘Each Monday all of our pupils in the Prep School have a dedicated ‘Enrichment Afternoon’ with opportunities for our pupils continue to complement their academic studies. 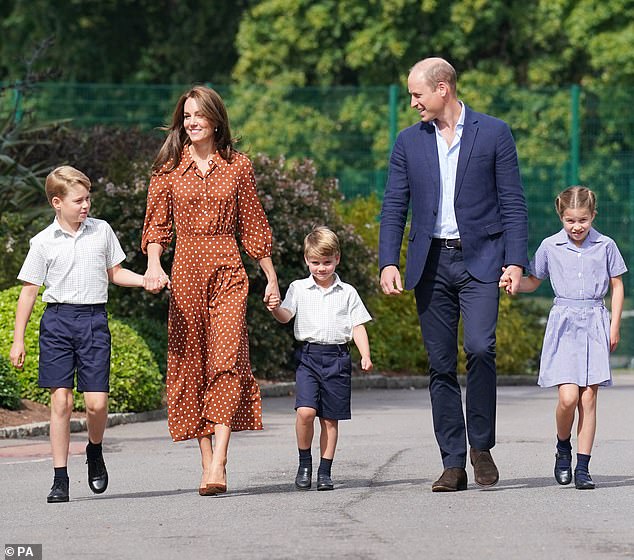 The mother-of-three beamed widely as she walked hand-in-hand with Prince George and Prince Louis, both of whom were dressed in the school’s summer uniform, up the drive

Kate’s brother James is an avid beekeeper, and Harry loves Polo so the children have a chance to sample some of their family’s favorite hobbies in their ‘enrichment afternoon sessions’.

The interview also touched on Meghan and Prince Harry, with Lorraine saying it’s a ‘shame’ that the young royals ‘haven’t seen their uncle Harry’, even though the pair are less than two miles apart at Frogmore Cottage and Adelaide Cottage both in Windsor.

Lorraine said: ‘It’s a shame they didn’t get to see their uncle Harry this week. We’ve heard from Meghan that she didn’t want the British press outside the school every day but that’s not the case is it?’

Roya said: ‘Yes, as per tradition, the press respect the royal’s privacy and there is one photographer, one set of photos and one clip allowed on the first day back. Nothing else.’