Keith Waterhouse, columnist, author, playwright, late of this parish, is best remembered for his brilliant Billy Liar, Jeffrey Bernard Is Unwell, and his twice-weekly musings on the madness of modern life.

Back in 1978, Keith published a novel called Office Life, a satire on the state of Britain in the 1970s. It centred on a fictitious company where everybody appears to be busy doing nothing. A newly hired employee sets out to discover what the firm actually does, while the staff are sitting in endless meetings, not answering phones, going for lunch, organising whip-rounds and suchlike.

Turns out the answer is, er, absolutely bugger all. The entire purpose of British Albion Ltd is keeping people employed.

Back in the Seventies Keith’s novel was seen as a sharp commentary on a nation in terminal decline. Today, it could be a template for just about every avenue of Government endeavour. Waterhouse had never heard of Human Resources, diversity leaders or wellness co-ordinators, let alone Working From Home. But if he’d been writing Office Life now, the book would have been full of them.

I can only assume that whoever is running Whitehall keeps a copy by the bed. Just about every single area of alleged public service is built around the convenience of the people who work there. 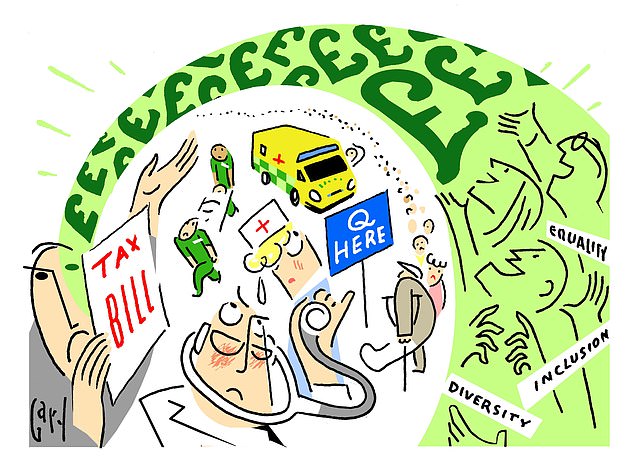 Waterhouse, who wrote a novel called Office Life, a satire on the state of Britain in the 1970s, had never heard of Human Resources, diversity leaders or wellness co-ordinators, let alone Working From Home. But if he’d been writing Office Life now, the book would have been full of them

It is now an article of faith that the interests of the staff must come before those of the taxpayers they are employed to serve.

Take the NHS. And let’s get the caveat out of the way first. The health service has countless dedicated front-line doctors, nurses, paramedics, porters and receptionists doing their very best in difficult circumstances. In most cases, overworked and underpaid.

But the Soviet-style bureaucracy exists on another planet. They look on the NHS as a glorified job creation scheme, there not to treat patients but to mollycoddle its ever-expanding army of managers and keep them well remunerated in the style to which they would like to become accustomed.

It was utterly predictable that the emergency £12 billion pumped into the health service to clear the backlog caused by Covid would disappear down a black hole.

Instead of going straight into reinforcing A&E or hiring more nurses, most of the money has been swallowed up by bureaucrats to expand their empires. For instance, Mail Online’s John Ely has just discovered that despite constantly pleading poverty the NHS is still splashing out on hiring even more superfluous diversity and inclusion officers, whatever they are.

Doncaster and Bassetlaw Teaching Hospitals is advertising for a ‘Head of Leadership, Equality Diversity and Inclusion and Wellbeing’ on the thick end of £76,000 a year — almost triple the starting salary of a junior doctor.

Apparently, this vital job involves: ‘Working with senior leaders to be a forward-thinking and inclusive people-centred employer which embraces and values diversity, difference and lived experience’. 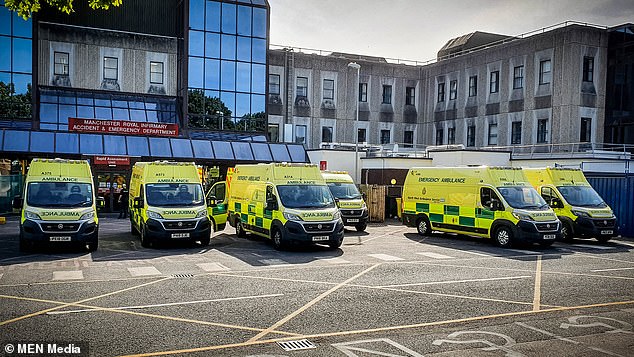 The London Ambulance Service has launched a series of ‘kindness workshops’ for staff run by a private company, who aren’t doing it out of the goodness of their hearts

What does that even mean? And when you’re being put on hold for hours trying unsuccessfully to get an appointment to see your GP sometime in the next millennium, and suffering in silence because your hip operation has been postponed yet again, who cares?

In Surrey, they’re also anxious to recruit an Equality, Diversity and Inclusion Lead on 53 grand, plus an extra five per cent supplement on account of having to live in a high-cost part of the country.

But then the advert goes on to say that flexible working from home will be encouraged. So why would you need a top-up? Presumably to pay for all those Hobnobs and your Netflix subscription.

The successful candidate will: ‘Act as champion, ensuring that developments across the system take equality issues into consideration as part of their everyday work and that individuals feel safe and supported in expressing their diversity’.

Who writes this stuff: Bill and Ben The Flowerpot Men?

No mention, naturally, of making sure patients feel ‘safe’ knowing that they might actually get to see a doctor before they die screaming and kicking in agony.

Elsewhere, thanks to columnist Mary Wakefield writing in this week’s Spectator magazine, we learn that the London Ambulance Service has launched a series of ‘kindness workshops’ for staff run by a private company, who aren’t doing it out of the goodness of their hearts. 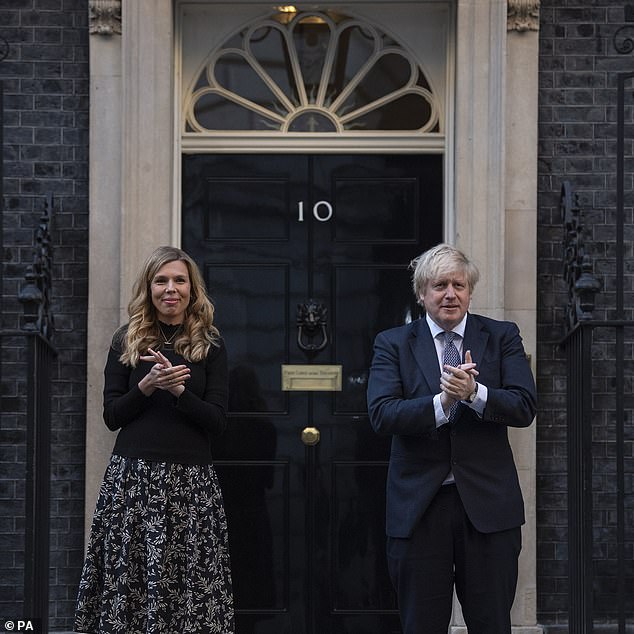 Let’s agree that the ambulance service is under great pressure. But surely what it needs is more ambulances, more ambulance drivers, more staff in A&E and more people answering 999 calls. Not a soppy programme of happy-clappy New Age seminars run by a quack consultancy in thrall to American West Coast notions of wellbeing at work.

Who’s answering the phone or responding to emergencies while staff are attending these sessions?

The outfit responsible for this nonsense, called A Kind Life, has run courses like this for 35,000 NHS staff, all paid for out of our taxes. Nice work if you can get it.

Yet while NHS staff are being taught to ‘be kind’ to themselves and bureaucrats are busy expanding their empires with ever more yuman resources, diversity and inclusion specialists, seriously ill people the health service was set up to treat are, quite literally, dying for lack of care and attention.

Meanwhile, most people can’t get a doctor’s appointment for love nor money. Since Covid, the majority of GPs have decided they’d rather work part-time, work from home or not work at all. 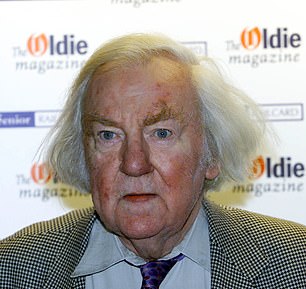 Keith Waterhouse, columnist, author, playwright, in 1978 published a novel called Office Life, a satire on the state of Britain in the 1970s

Once again this is the inevitable consequence of the New Labour cultural revolution, which began 25 years ago and has wrecked most of our institutions from the police to the Passport Office.

The NHS has never properly recovered from Blair giving GPs a huge pay rise while simultaneously relieving them of the obligation to work out-of-hours or at weekends. Shamefully, the last three Tory governments have failed to reform the NHS, preferring to shovel money at it without asking for anything in return.

The extra no-questions-asked £12 billion he and Dishy Rishi pumped into the NHS a few months ago has, with depressing predictability, been squandered on pay rises and recruitment.

We’re crying out for more medical staff, but instead for our money we get utterly useless diversity officers, inclusion wallahs and kindness courses.

Which is more than can be said for the NHS. 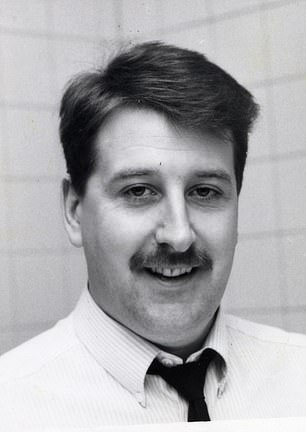 Quelle horreur. Just when we thought the hipster beard fad had passed, along comes news that moustaches are making a comeback.

Oh, dear. I must confess to once sporting a ‘tache. What can I say, it was the 1980s. I blame the Village People.

Frankly, unless you’re Tom Selleck or have the confidence to pull off the full Jimmy Edwards handlebar job, a moustache is never a good look.

There’s something of the door-to-door encyclopaedia salesman about it. Or one of those bogus colonels who used to hang around South Coast boarding houses preying on wealthy widows.

You know the sort, played by Leslie Phillips in black and white films. Ding, dong!

My moustache looked as if a hairy caterpillar had crawled onto my top lip and died. It used to beam out from above my column in London’s Evening Standard.

Thanks to the cuttings book, I can pinpoint the exact date I decided to shave it off. It was April 26, 1989. I’d received a letter from a reader asking for a signed copy of my ‘dishy’ photo.

It was from a man.

For a few years, back in the dim and distant, I used to present BBC Radio 5’s football phone-in 6-0-6. One of the great joys was watching and listening first hand to James Alexander Gordon reading out the classified football results. JAG — as he was universally known — used his marvellous intonation to signal the score. ‘East Fife, FIVE, Forfar, four.’ Sometimes he’d mischievously mislead listeners, just for the hell of it. ‘East Fife, FOUR, Forfar…FIVE!!’ But with kick-off times now all over the shop, the Five O’Clock results sequence has probably been destined for the chop for years. Still, there’s widespread sadness at the loss of another great British institution. I remember a hilarious send-up by Michael Bentine, of The Goons, getting increasingly excited as he reads out a string of draws and realises he might be about to win the Pools. You can find it online. In millions of homes around Britain, coupons would be filled in anticipation of hitting the jackpot. I used to sit with my dad, listening religiously to the wireless at 5pm on a Saturday, Biro in hand, checking off the scores.

Now it’s no more, another one of Ray Davies’s ‘The day they knocked down the Palais’ events. When they cancelled the football results, part of my childhood died.