Mourners in London may need to take a brolly with them when they queue for several hours through the streets of the capital to pay their respects to the Queen this week – with downpours expected tonight and temperatures set to tumble as Britain’s scorching summer finally gives way to autumn.

The Met Office said large parts of the South of England should be braced for ‘heavy bursts of rain’ throughout the evening and possibly into tomorrow, as tens of thousands of Britons prepare to make their final farewell to Her Majesty as she lies in state at the Palace of Westminster from tomorrow for four days until her state funeral at Westminster Abbey on Monday, September 19.

But the forecast has raised hopes of more rainbows like those seen over Buckingham Palace on Thursday, when the Queen died at Balmoral aged 96.

And though forecasts about the weather conditions for Monday’s funeral are still being drawn up, the Met Office has indicated that ‘patchy cloud with some interludes of sunshine is the most likely scenario for Monday at present’.

Today, the sun is forecast to be shining over St Giles’ Cathedral in Scotland’s capital at 5pm, when the Queen’s coffin is set to depart for Edinburgh Airport.

But rain is due for its arrival at 6.55pm at RAF Northolt in west London, accompanied by the Princess Royal and her husband, Vice Admiral Sir Tim Laurence.

The state hearse is likely to be doused by downpours en route to Buckingham Palace, and those lining the pavements to watch it pass by are advised to get their umbrellas ready.

Temperatures are expected to plunge below 20C by the end of the week, bringing a cool autumn snap to large parts of southern England including London, Oxford, Brighton, Gloucester, Cornwall, Devon and Canterbury, and Cardiff in South Wales. 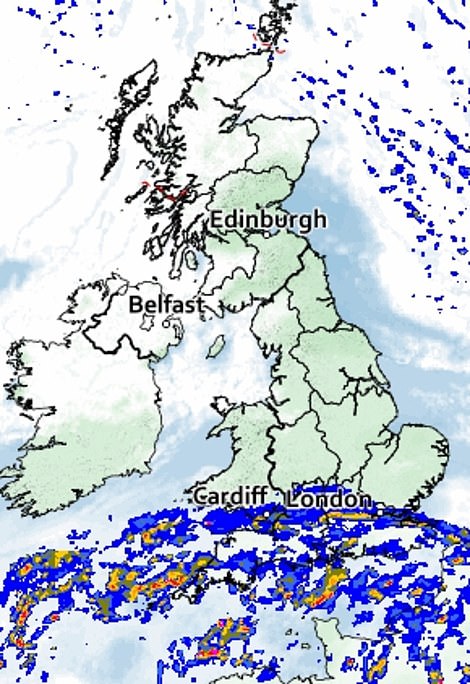 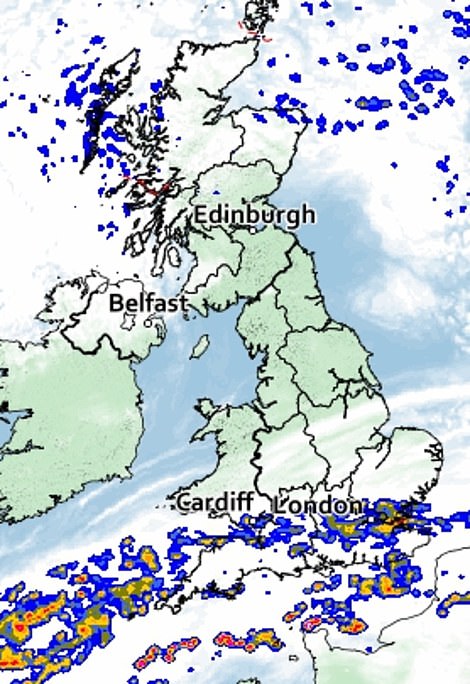 The Met Office has said large parts of the South of England should be braced for rain this afternoon (left). The forecaster has also predicted there will be large downpours over London overnight (right) 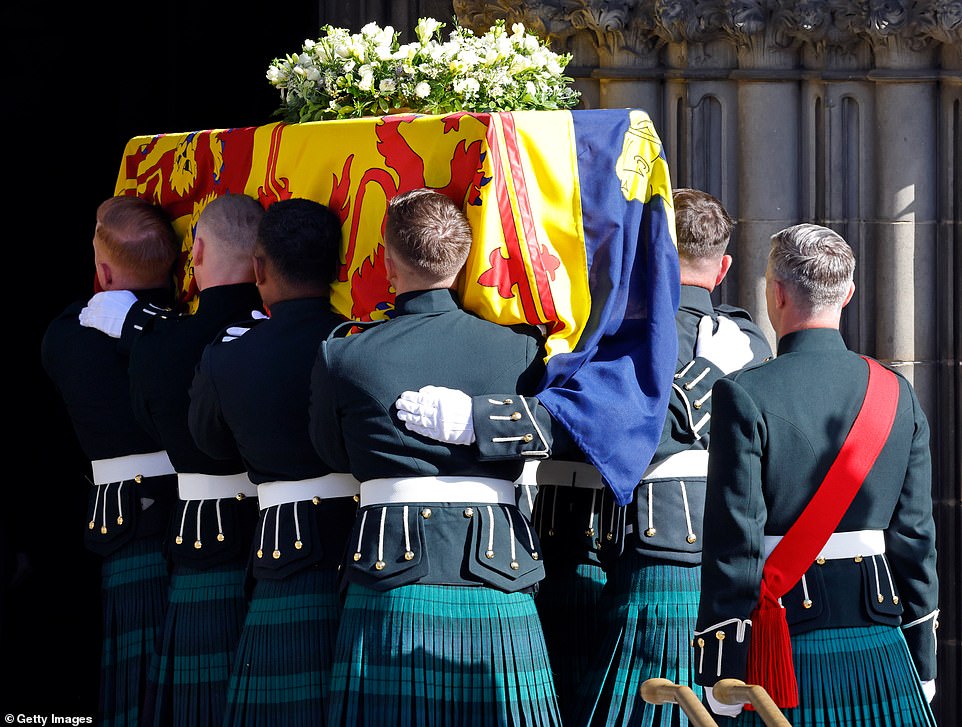 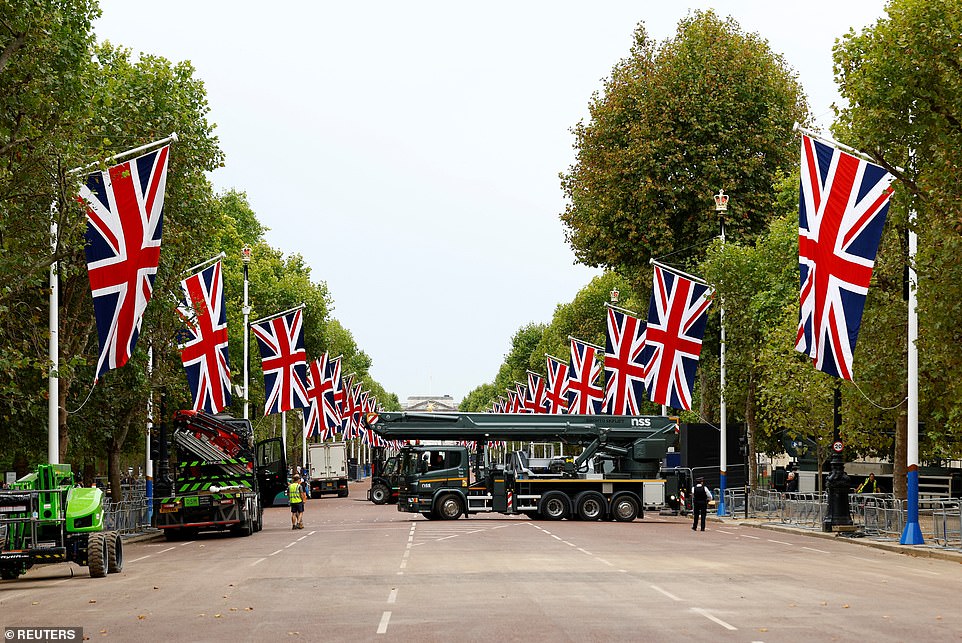 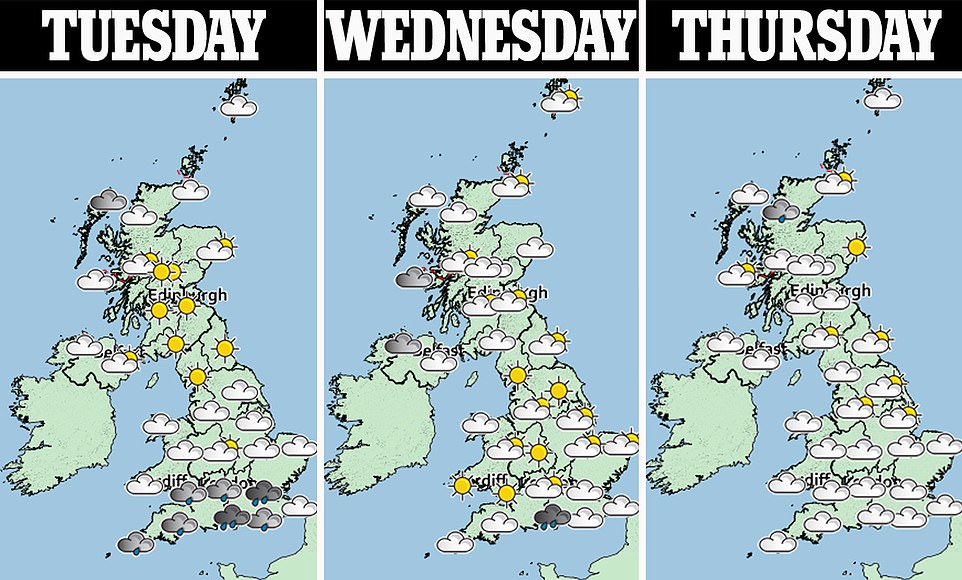 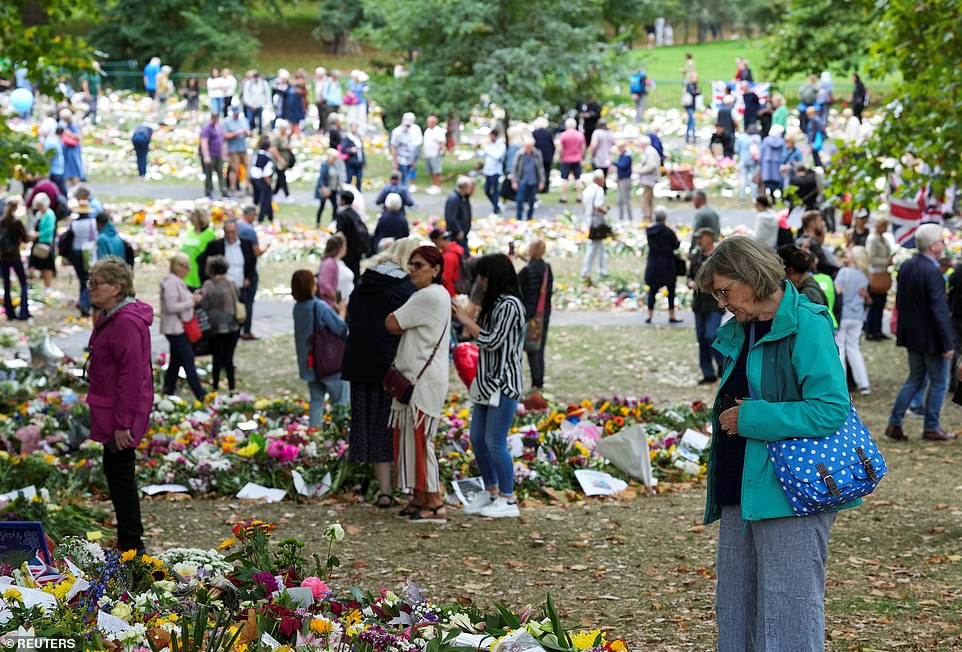 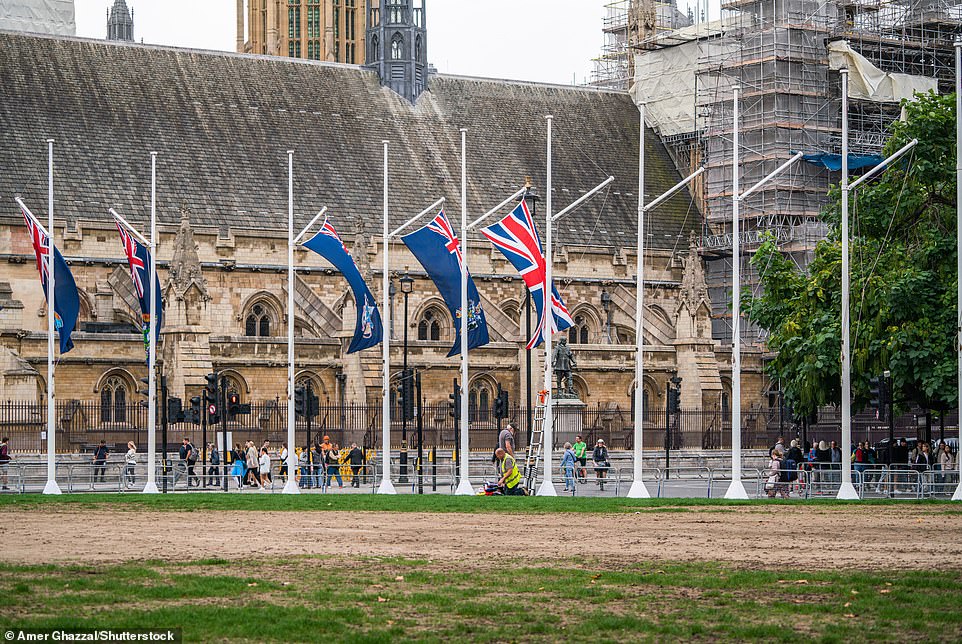 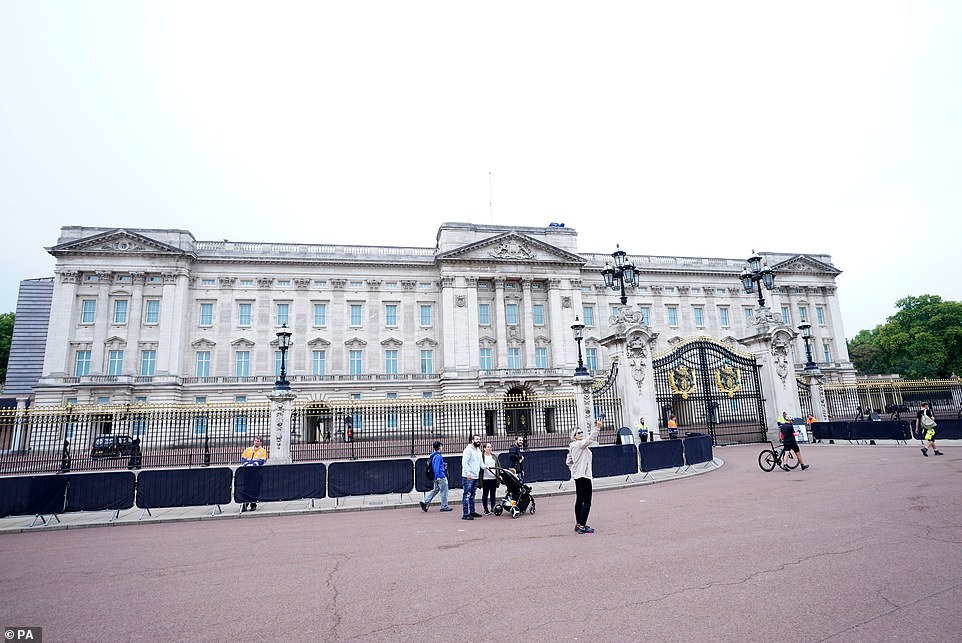 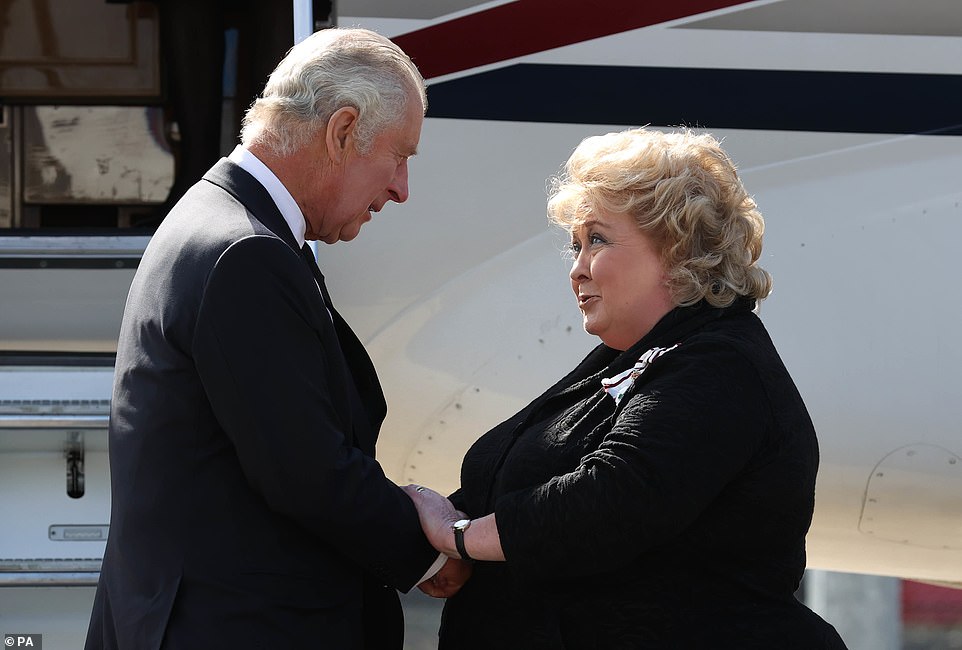 Met Office spokesman Stephen Dixon said: ‘There are some showers possible early on Wednesday. It will still feel quite mild with maximum temperatures of 23C which is above average for the time of year.

‘If you are heading out early on Wednesday, then bringing an umbrella would probably be advisable with the nature of the showers around. As it heads into the afternoon, that risk does lessen slightly but it will generally be feeling quite mild.’

Mr Dixon added that Thursday will be an ‘overcast day with a fair bit of cloud around but not much in the way of rain’.

Meanwhile in Northern Ireland, temperatures of around 18C are expected for those in Belfast, where King Charles III and Camilla, Queen Consort are visiting Hillsborough Castle and St Anne’s Cathedral.

Met Office meteorologist Alex Deakin predicted a ‘fine day for most’ with the exception of southern England, where people heading out should be braced for ‘heavy bursts of rain’ throughout the evening.

He said: ‘The rain is going to pop up through the day across parts of southern England. There are some heavy bursts of rain likely, especially through the late afternoon and into the evening, making for a lot of spray and surface water on the roads.

‘It’s still quite humid-feeling with highs of 22C or 23C, whereas further north, it’s going to be quite pleasant in the September sunshine, with temperatures in the high teens or low twenties likely.’

Windsor residents have continued to pay their respects and reflect on their own personal memories of their ‘neighbour’, the late Queen, at Windsor Castle. 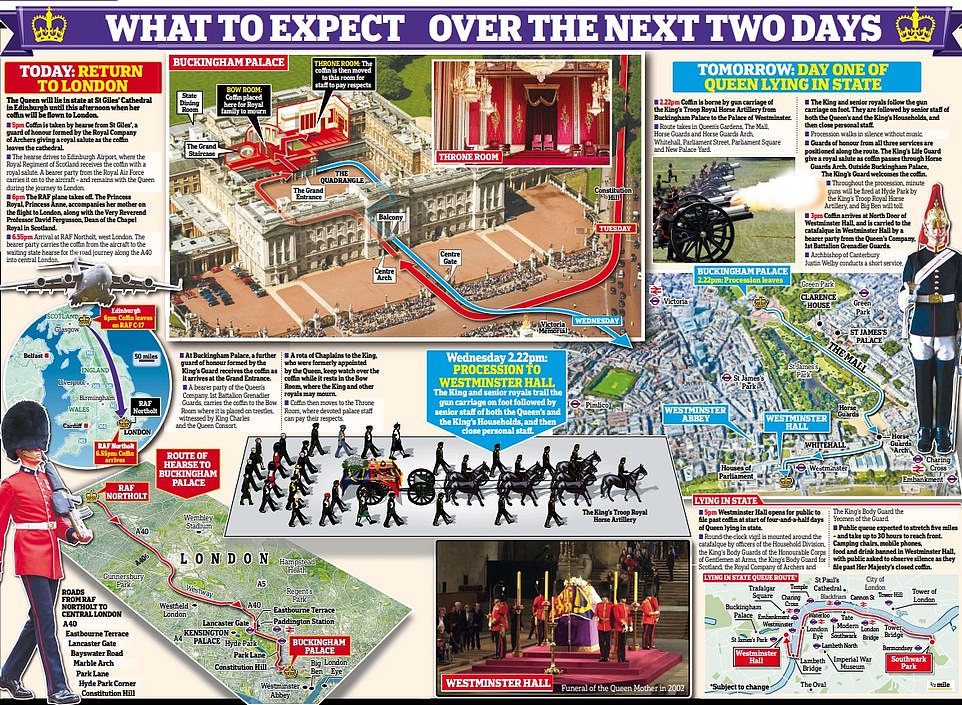 Official details of the route for the lying-in-state queue will be published at 10pm tonight, but this is the predicted route 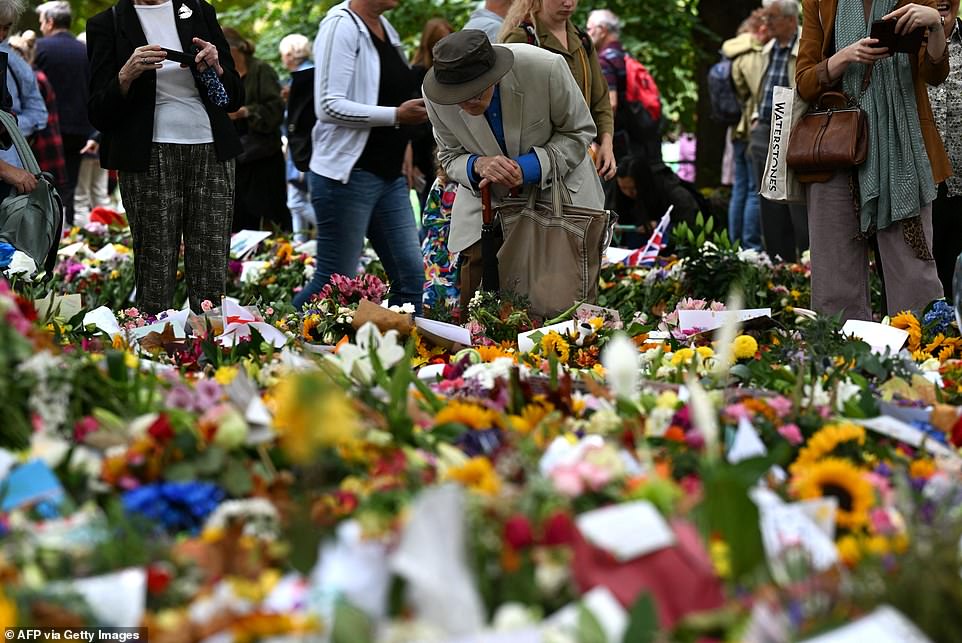 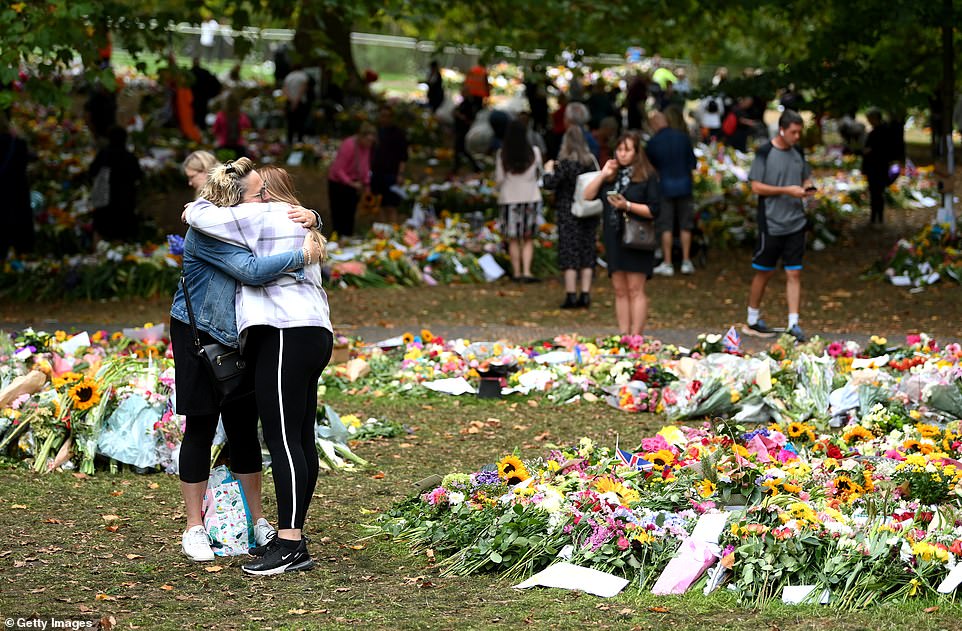 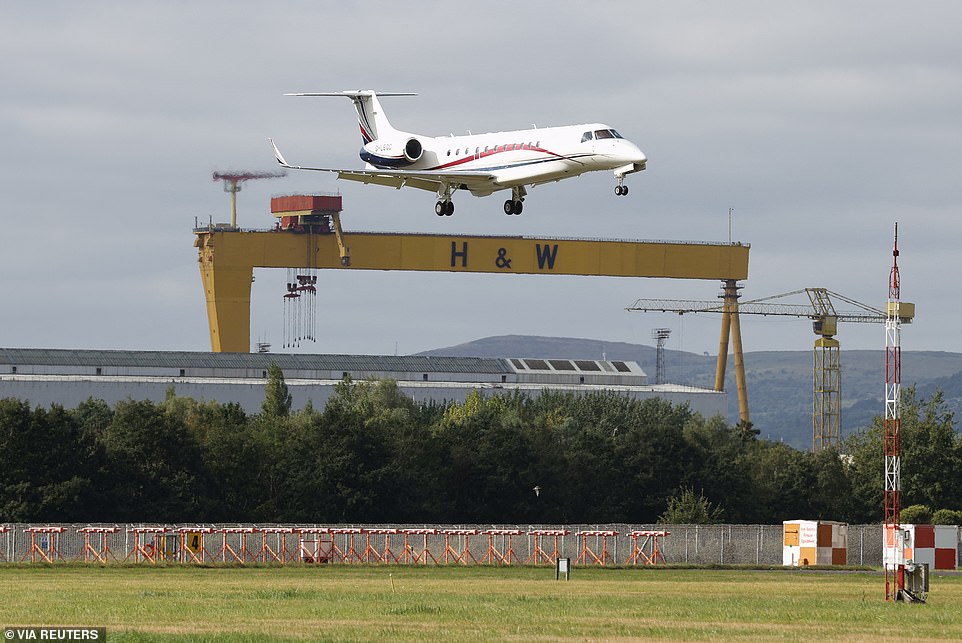 Locals fondly recalled seeing the royal family depart for Ascot, the Queen and the Duke of Edinburgh riding their horses near the castle, and local Silver Jubilee celebrations as they came to one of the late monarch’s favourite residences to remember her.

Anna Hewitt, who has lived in Windsor since she was a child, told the PA news agency: ‘Coming up on Thursday evening, I brought my three teenage children at about 8.30pm on Thursday night, so very soon after news had broken, and even though of course she’s not been here for the summer, the castle just felt empty, very empty.

‘The trees all down the Long Walk, the beautiful horse chestnut trees, again were just so still, it did feel as if that presence that we’ve always just trusted was here had gone.’

She added: ‘I grew up in Windsor and I’ve pretty much been here my entire life. Coming to pay my respects to the Queen, who absolutely felt like a neighbour to all of us, is for all the royal occasions that we’ve celebrated here.

‘For myself remembering as a child being at the Silver Jubilee celebrations, I remember Princess Anne coming to my local school to plant a tree. It feels a very personal sense of loss even though I actually never got to meet her.

‘When at school we would come every year and wave to the royal family as they were coming down from the castle to go to Ascot races, and so we would see (the Queen) and it was always, ‘what colour would her outfit be?’ It was the favourite game to play.

‘I’ve come up a few times this week to just soak up this part of history and just be able to feel as if I am part of it in the way that I did when she was alive.’

Sisters Linda and Christine, who are 73 and 75, recalled having to ‘do a double-take’ when they saw the Queen and husband Philip near the Long Walk of Windsor Castle when they were younger.

Linda said: ‘We used to see her riding down here, if you were lucky, right in the early years, and Prince Philip in his Land Rover. She’s always been a constant in our lives, so it’s only right that we come and pay our respects.’

Christine said: ‘We’ve also been here many times when they’ve had state events. We’ve always come down to see processions, (Linda) has always brought (her) grandchildren to see the soldiers changing the guard in the mornings.’

Linda described the late monarch as ‘always magnificent’, and said ‘there’s just nobody I can think of ever like she was. It will be a loss, a huge loss’.

Flowers had already begun to build up around the castle gates and towards the top of the Long Walk at 8.30am, including a tribute from a local group of Brownies, a section of the Girl Guides, which read: ‘Thank you for all you have done for girl guiding.’

At 10pm each day, floral tributes are checked, with the cards and written tributes collected for the royal family, and then gathered to be laid along the grass banks up to the castle.