Newly-impeached President Donald Trump is turning on some of his most trusted allies, and has reportedly ordered aides not to pay the legal fees of his personal attorney Rudy Giuliani, as mounting legal threats and isolation close in on the president from all sides.

Trump expressed disappointment with some of Giuliani’s legal moves in challenging the election results, and did not appreciate his demand for $20,000 a day in the failed push, two officials told the Washington Post.

The officials said the president is also demanding to personally approve all expenses incurred by Giuliani in his multi-state legal campaign to prove election fraud, which quickly fizzled in court.

It comes as Trump is said to be increasingly isolated in the final days of his term, lashing out even at once-trusted members of his loyal inner circle, as he faces legal jeopardy from multiple fronts and challenges to his family’s business after leaving office.

Stripped of his ability to air his grievances on Twitter as the House on Wednesday voted to impeach him for a second time, Trump is said by insiders to be wallowing in ‘self-pity’ and furious that his allies aren’t publicly defending him.

Trump is said to be increasingly isolated in his final days in office, lashing out even at once-trusted members of his loyal inner circle. Trump is seen above Wednesday issuing a speech delivered from a teleprompter at the Resolute Desk, in which he said ‘unequivocally’ condemned violence and  was’shocked at the calamity at the Capitol’ – the opposite of accounts of him watching transfixed and being unwilling to call it off as it happened. He did not mention his impeachment which Nancy Pelosi signed off on as the speech emerged 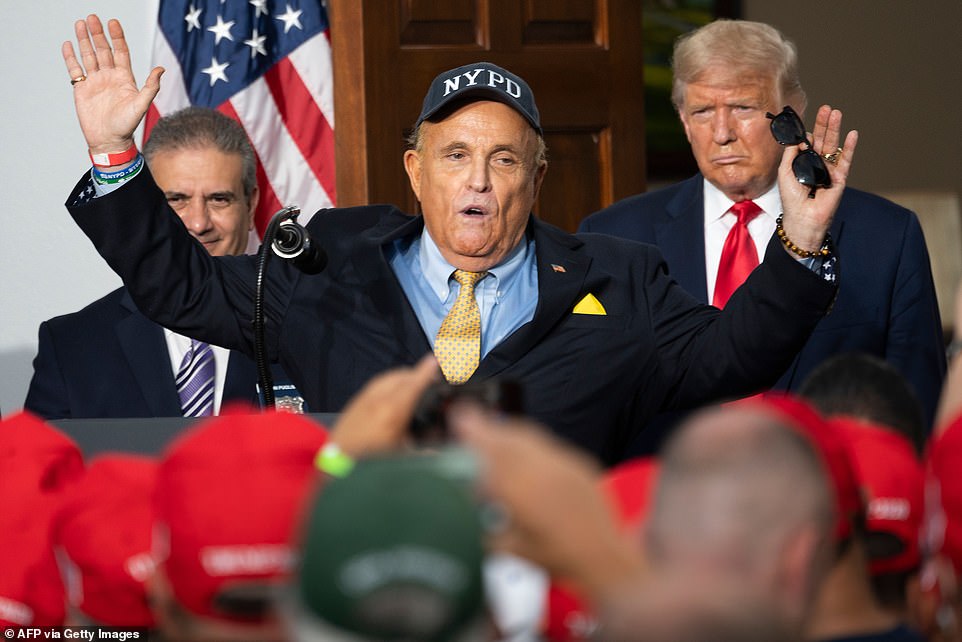 Amid the strain of his final days in office, Trump’s relationship with Giuliani may be fracturing. They are seen above at an event in August 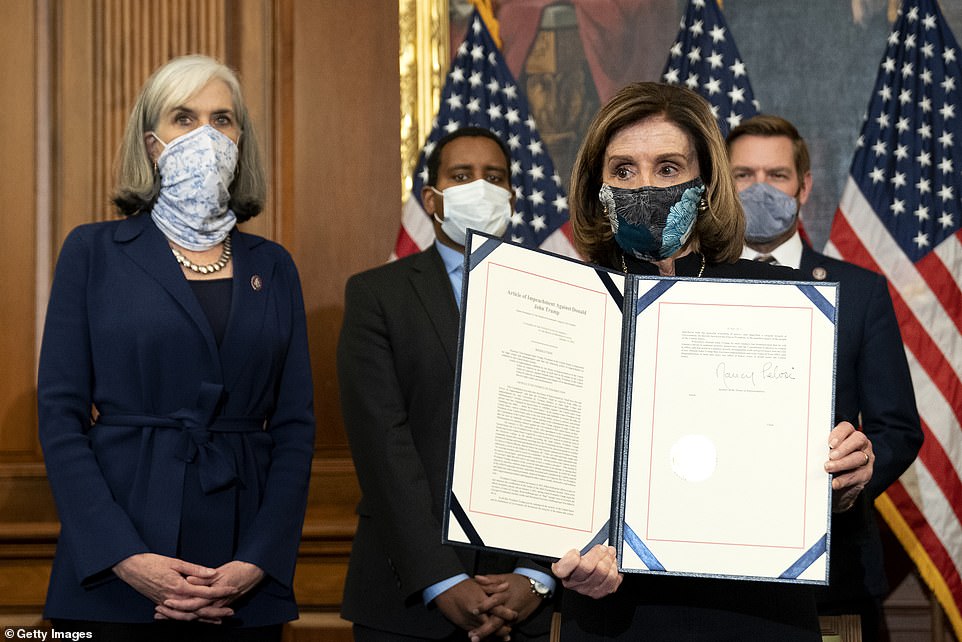 Speaker of the House Nancy Pelosi displays a signed article of impeachment against President Donald Trump at the U.S. Capitol on Wednesday in Washington, DC

‘The president is pretty wound up,’ one senior administration official told the Post. ‘No one is out there’ defending him, he added.

As the House debated impeachment on Wednesday, Trump’s press secretary did not mount a public defense, his aides blasted out no talking points, and there was little effort to whip Republican votes against the Democrats’ impeachment push.

Among Trump’s remaining inner circle, there is said to be little appetite for defending the president for his actions on January 6, when he whipped his rally into a frenzy and told them to march on the Capitol.

‘I’m told from sources close to the White House that the president is in self-pity mode, that he is increasingly isolated inside the White House,’ CNN senior Washington correspondent Pamela Brown said on-air Wednesday.

‘The president for his part believes — is upset that no one is defending him,’ she added.

‘Even those who have defended the president fiercely all these years are saying privately that no one else got him here but himself, the reason why he was impeached twice was his fault and no one else’s,’ Brown said.

On Wednesday, staff were seen removing office furniture from the White House ahead of Joe Biden’s inauguration next week. White House advisor Peter Navarro was seen leaving the West Wing with a framed photograph of Trump and Chinese President Xi Jinping. 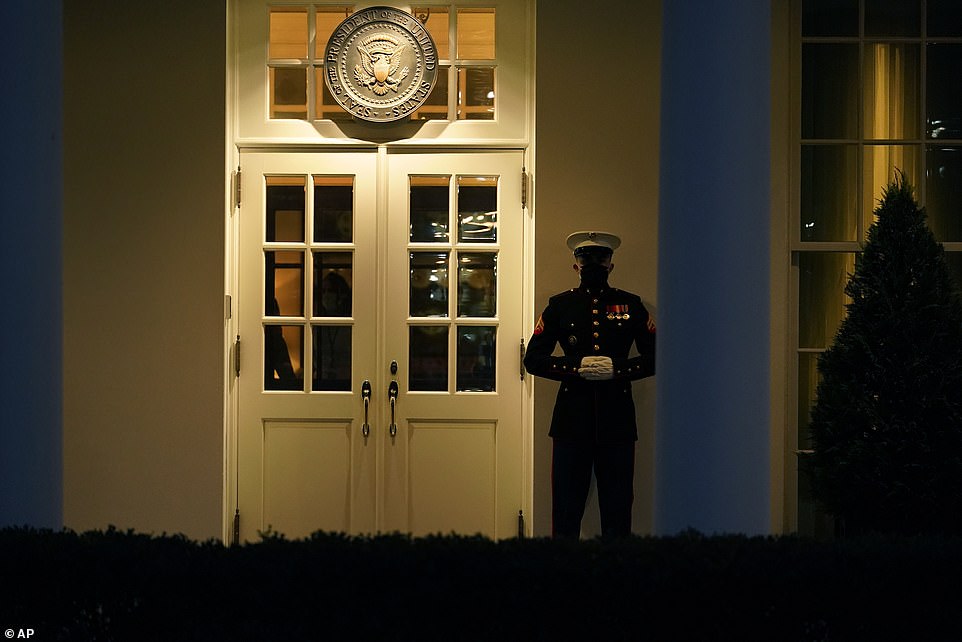 A Marine guard stands at the entrance to the West Wing of the White House on Wednesday night. The guard’s presence signifies the president is likely in the Oval Office 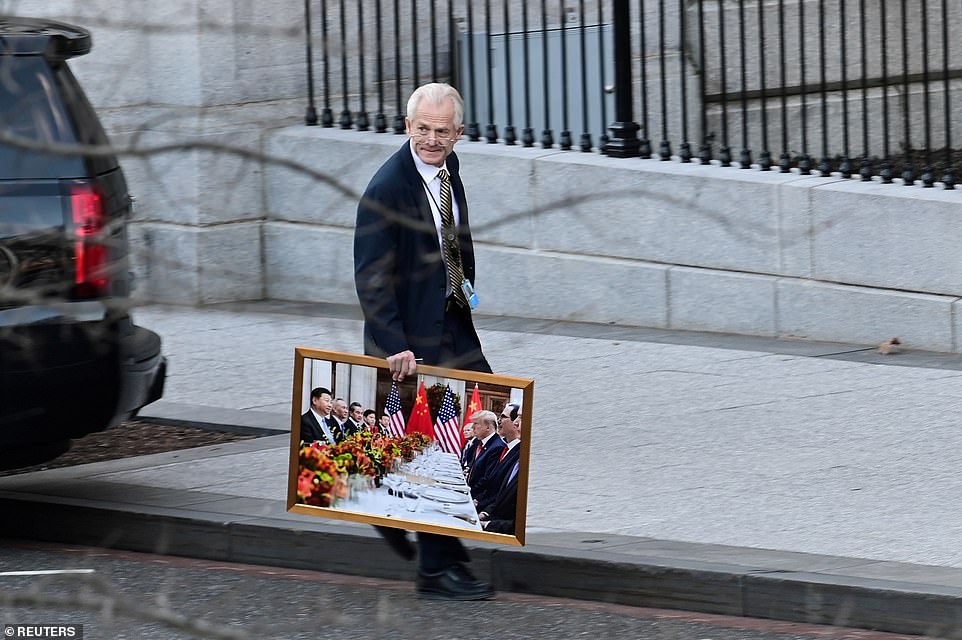 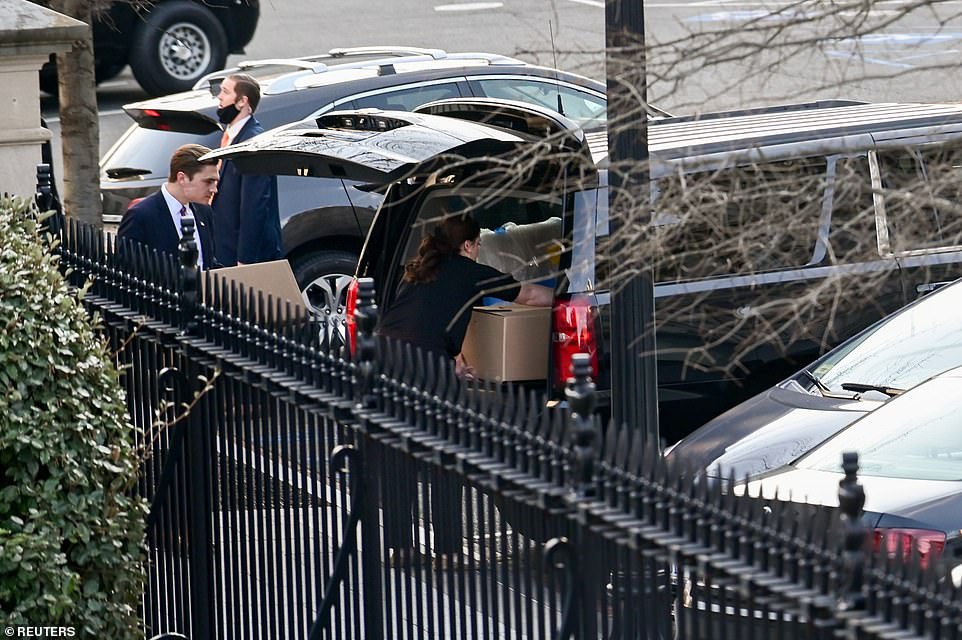 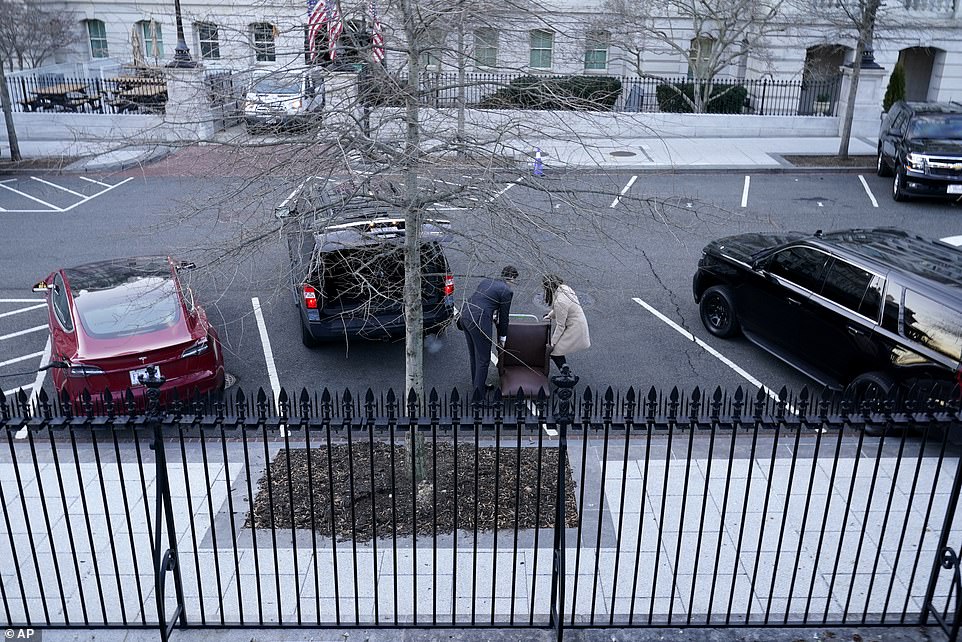 Amid the strain, Trump’s relationship with Giuliani may be fracturing – although the president’s lawyer is one of the few who have vigorously defended him in public, insisting that Trump’s actions were not incitement.

Giuliani has been a key legal advisor to Trump in his election challenge, after leading a leading a personal crusade to unearth potential dirt on Joe Biden and his son Hunter in Ukraine.

It led to speculation that the location had been mistakenly booked in the belief that it was the upscale Four Seasons Hotel Philadelphia in Center City, although the incident was never fully explained.

At another press conference, at the Republican National Committee in Washington DC, an agitated and sweaty Giuliani appeared to be melting on live TV, with some kind of hair dye dripping down the side of his face.

Trump, who is known to fixate on the image of his aides, insisting they project a polished veneer, was likely unhappy with those debacles and the mockery they drew. 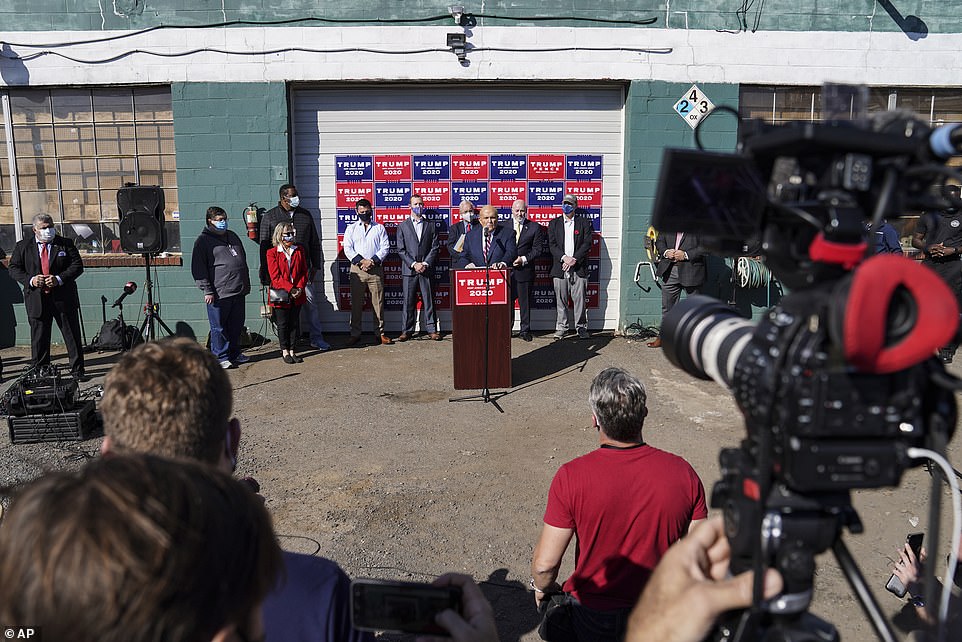 In his election challenge push, Giuliani held a notorious press conference held in the parking lot of Four Seasons Total Landscaping outside Philadelphia in November, leading to speculation that the location had been booked in the belief it was the posh Four Seasons hotel 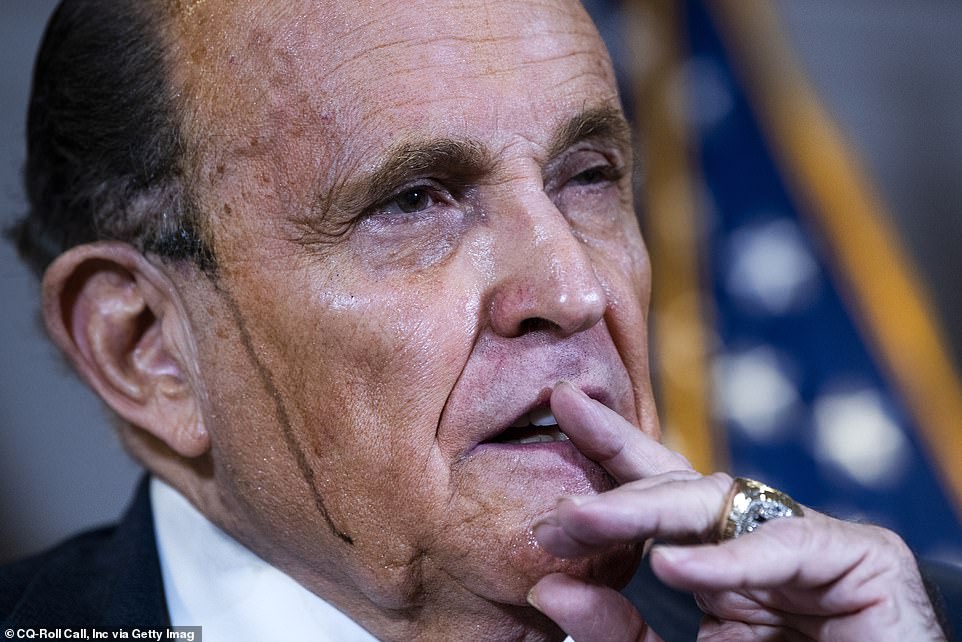 At another election fraud press conference, at the Republican National Committee in Washington DC, an agitated and sweaty Giuliani appeared to be melting on live TV 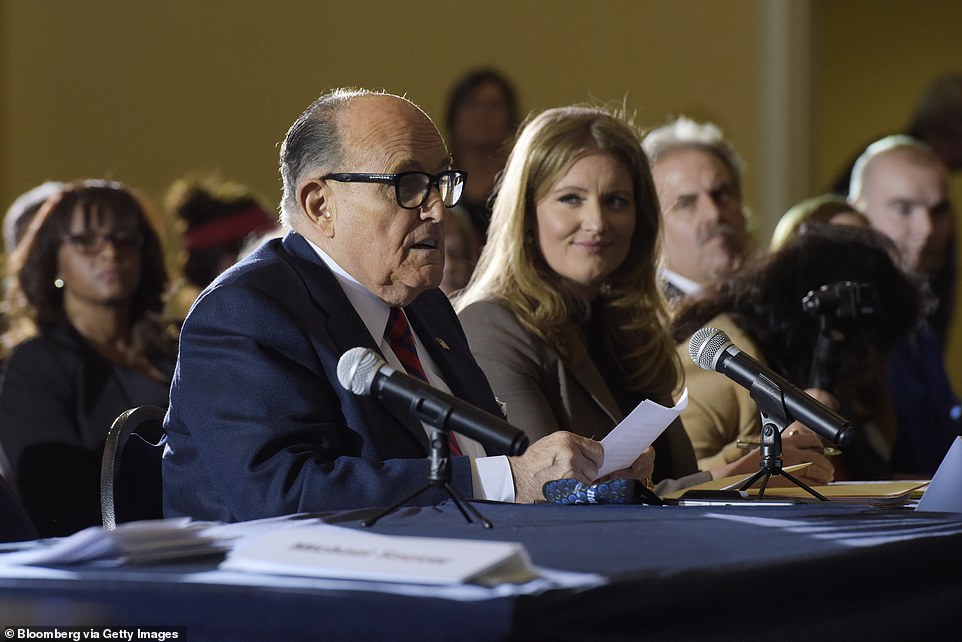 Rudy Giuliani speaks during a Pennsylvania Senate Majority Policy Committee hearing in Gettysburg, Pennsylvania, U.S., on Wednesday, Nov. 25, 2020. Trump ran with Giuliani’s claims of massive fraud, continuing to make the case at a rally before the Capitol riot

As well, Giuliani now faces his own potential legal exposure for telling supporters to engage in ‘trial by combat’ in his remarks at a January 6 rally, following which Trump’s supporters stormed the U.S. Capitol.

Defending his rally remarks, Giuliani has said that he was quoting from the HBO series Game Of Thrones, which he inexplicably described as a ‘famous documentary about fictitious medieval England.’

‘I was referencing the kind of trial that took place for Tyrion,’ Giuliani told The Hill, referring to a character from the series.

‘When Tyrion, who is a very small man, is accused of murder. He didn’t commit murder, he can’t defend himself, and he hires a champion to defend him,’ he added.

Giuliani’s comments appear in evidence for impeachment, after a House Judiciary Committee report cited them before the House voted to impeach Trump Wednesday on a single count of ‘incitement to insurrection.’

Giuliani is also facing possible expulsion from the New York State Bar Association over the incendiary remarks. Removal from the bar association, a voluntary membership organization dating to 1876, is not the same as being disbarred and banned from practicing law. That can only be done by the courts.

It’s unclear whether Giuliani’s rally remarks would raise concerns for Trump about including him on his impeachment legal team, but on Sunday Reuters reported that Giuliani may lead the impeachment defense. 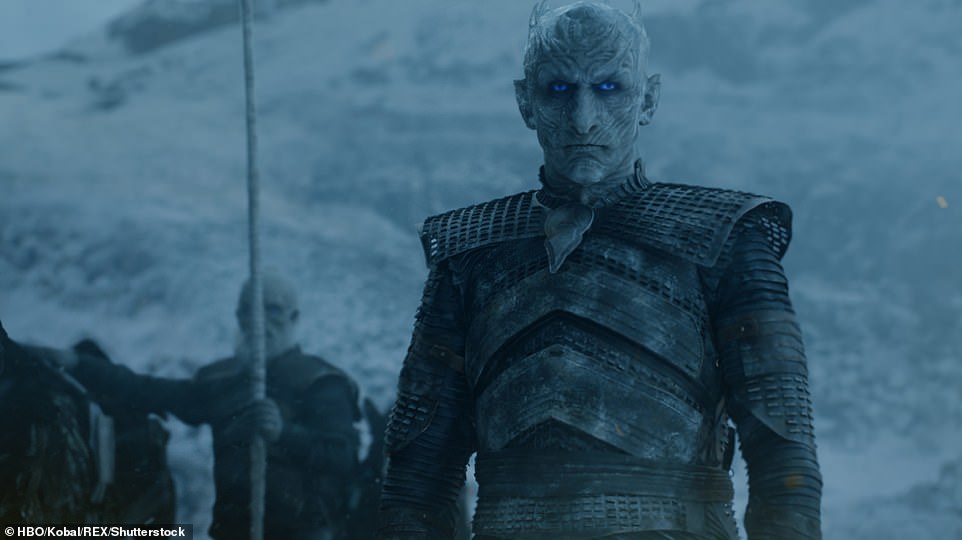 Giuliani said his ‘trial by combat’ remarks was a quote from the HBO series Game Of Thrones, which he inexplicably described as a ‘famous documentary about fictitious medieval England’

Trump is now considering hiring a law professor who spoke at his January 6 rally, according to two people familiar with the matter.

John Eastman, who joined Trump’s personal lawyer Rudy Giuliani on stage at the rally, is being considered for a role on Trump’s defense team, the people said.

Eastman, 60, who made unsubstantiated claims of election fraud at the rally, would neither confirm nor deny whether he will represent Trump, citing attorney-client privilege.

Asked whether he would be willing, Eastman said: ‘If the President of the United States asked me to consider helping him, I would certainly give it consideration.’

The White House did not immediately respond to a request for comment on Eastman and has declined to comment on Giuliani.

The U.S. House of Representatives on Wednesday made Trump the first U.S. president to be impeached twice, charging him with inciting an insurrection as lawmakers sought to certify President-elect Joe Biden’s victory in the November 3 election. 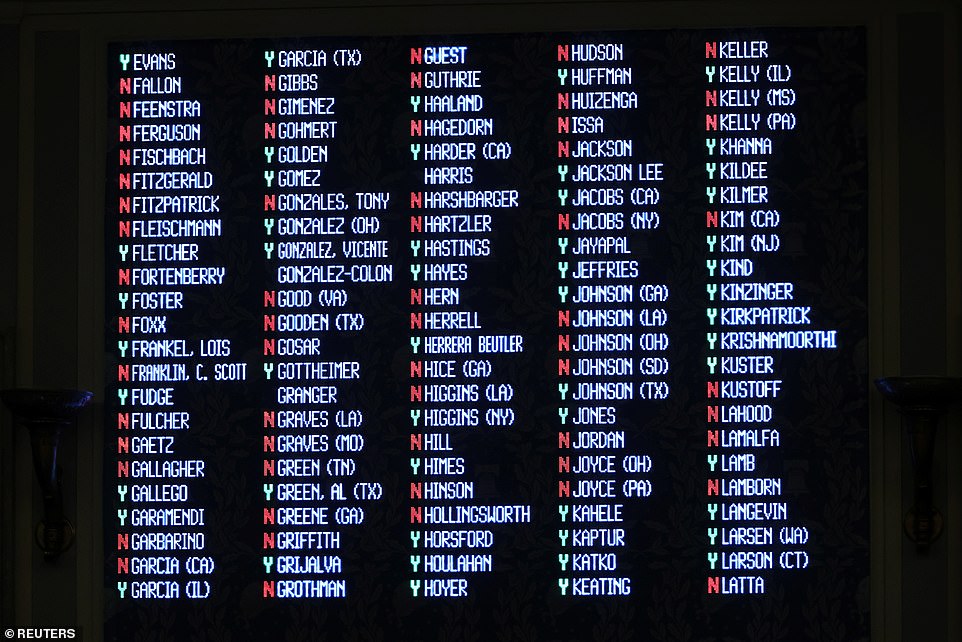 The U.S. House of Representatives on Wednesday made Trump the first U.S. president to be impeached twice, charging him with inciting an insurrection as lawmakers sought to certify President-elect Joe Biden’s victory in the November 3 election. An electronic readout shows votes

At the rally, Eastman, who until Wednesday was a professor at Chapman University in California, spoke about ‘secret folders’ of ballots used to defraud the election before Trump took the stage and repeated the discredited claim that the election was stolen from him.

Faculty members and students, among others, subsequently called for Chapman to fire Eastman. In a statement on Wednesday, the university president said an agreement had been reached under which Eastman would immediately retire from Chapman.

Eastman told Reuters he did not believe he did anything wrong. He does not think Trump has culpability, either. ‘None, whatsoever,’ he said.

Eastman came under fire last summer for an op-ed he wrote in Newsweek that questioned whether Vice President-elect Kamala Harris was eligible to serve because her parents were not U.S. citizens or permanent residents.

Trump may have a tough time retaining legal talent. He has had trouble hiring lawyers since former Special Counsel Robert Mueller’s probe of Russian interference in the 2016 presidential election, and the widespread condemnation of the violence at the Capitol and pressure from anti-Trump groups may discourage others from signing up.

Trump was first impeached by the Democratic-led House in 2019 on charges that he pressured Ukraine’s president to announce an investigation of his rival Biden, but was acquitted by the Republican-led Senate in February 2020.

At his second trial, Trump will have to do without the services prominent constitutional lawyer Alan Dershowitz, who joined his team last year and appeared in the Senate chamber. 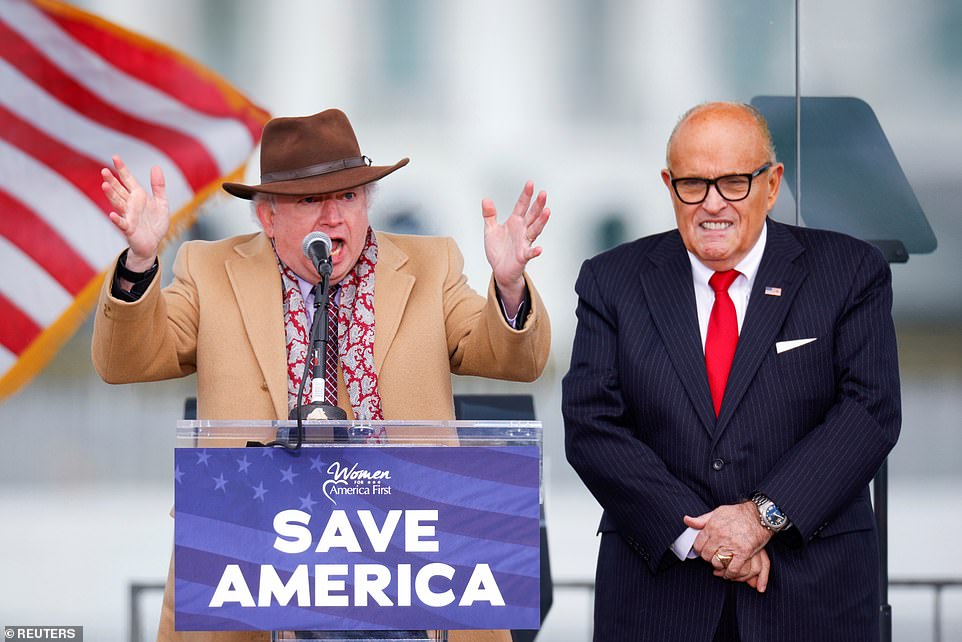 John Eastman (left), who joined Trump’s personal lawyer Rudy Giuliani on stage at the January 6 rally, is being considered for a role on Trump’s defense team, sources said 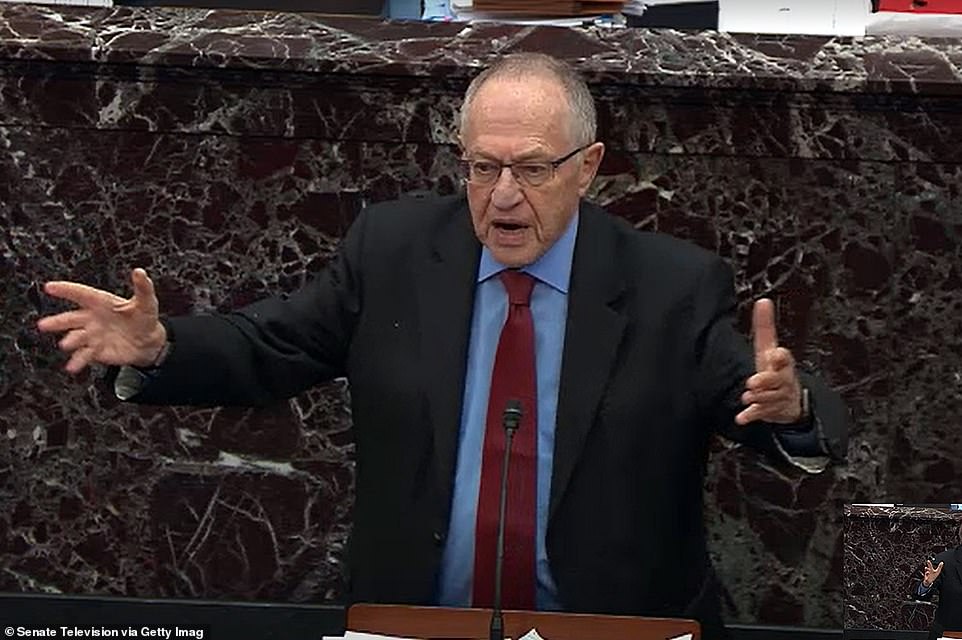 Lawyer Alan Dershowitz, seen at Trump’s first impeachment, said he won’t defend Trump at a second impeachment trial, but will defend the First Amendment in public

‘I will be defending the First Amendment in the court of public opinion, not in the Senate,’ Dershowitz told DailyMail.com. He didn’t say whether Trump had asked him to serve in his defense.

White House counsel Pat Cipollone, who helped lead the defense effort during the impeachment over Ukraine, is also not expected to participate in the latest effort, according to one person familiar with the matter. Cipollone will leave his post on January 20, when Biden becomes president.

Jay Sekulow, another personal lawyer for Trump who played a role during the first impeachment, also is not expected to be involved.

John Yoo, a conservative legal scholar who also clerked for Thomas and worked in the Department of Justice during the George W. Bush administration, said on Wednesday he did not think Trump would want him to represent him.

‘I think he committed impeachable acts,’ said Yoo, although he added that he thought incitement was the wrong grounds and ‘the Senate should not convict him.’

READ THE FULL ARTICLE OF IMPEACHMENT

Shares Price: (as of – Details) ‘A new literary star’ The Times The instant Sunday Times and New York Times