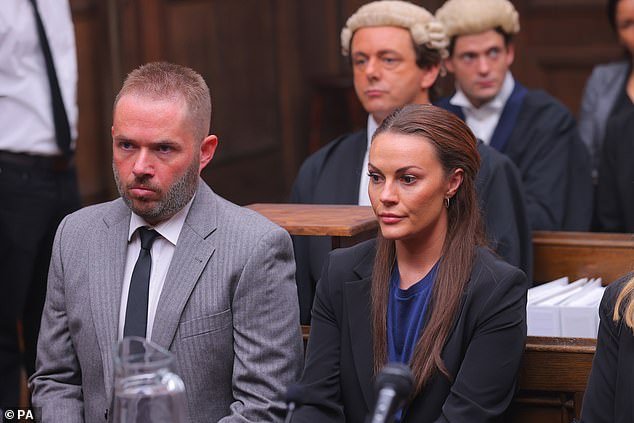 The upcoming series recreates the legal battle between Coleen Rooney and Rebekah Vardy that came to be known as the ‘Wagatha Christie‘ trial.

The images show actresses Chanel Creswell as Coleen and Natalia Tena as Rebekah sat in court while being cross-examined. 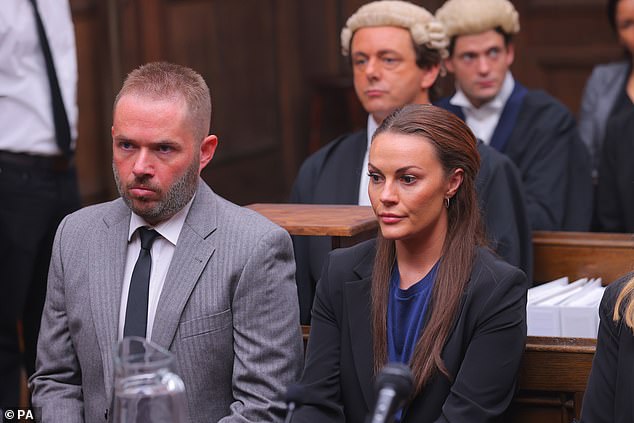 Chanel was dressed in a navy blouse and black suit for one scene as she sat alongside actor Dion Lloyd who plays Coleen’s husband Wayne Rooney.

Other images show a recreation of Rebekah walking into the courtroom dressed in a navy long-sleeved dress and large sunglasses.

Chanel is also seen doing some investigative work as Coleen, scanning posts on her phone while at home. 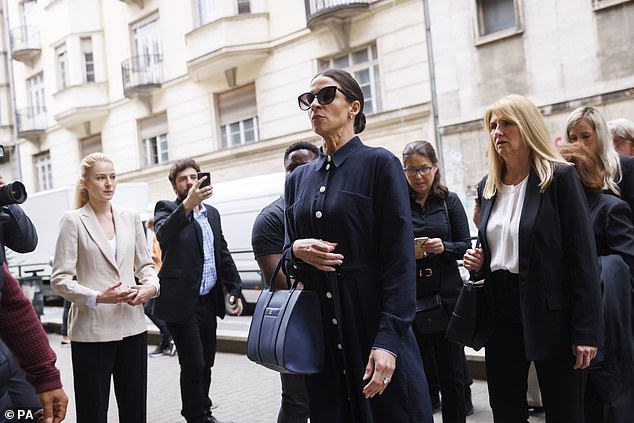 Drama: One image shows a recreation of Rebekah Vardy (Natalia Tena) walking into the courtroom dressed in a navy long-sleeved dress and large sunglasses 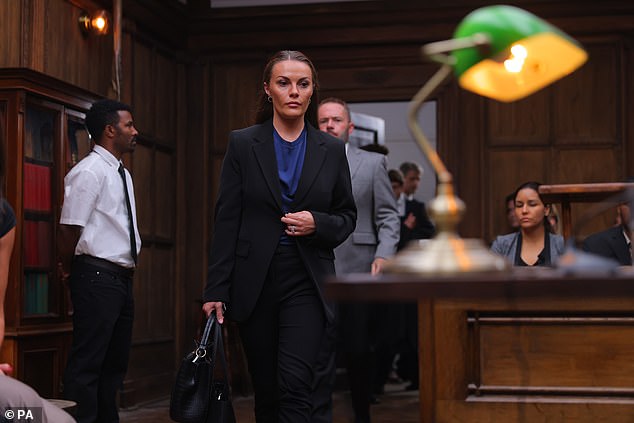 Wagatha Christie: Chanel was dressed in a navy blouse and black suit for one scene

Created from the real court transcripts, Vardy v Rooney: A Courtroom Drama, will give viewers a chance to relive the untelevised scenes from inside the courtroom with all the drama that kept the public and media gripped for weeks.

The programme, produced by Chalkboard, who made BBC’s historical murder series Murder, Mystery and My Family, will air later this year.

The former friends first publicly fell out in 2019 when Coleen accused Rebekah of leaking posts from her private Instagram account to The Sun.

Her rigorous sleuthing to find the culprit earned her the title Wagatha Christie in reference to mystery writer Agatha Christie. 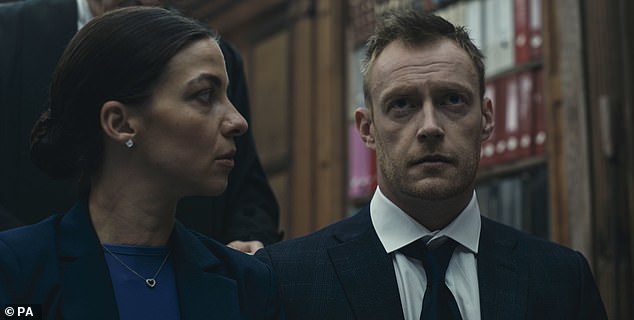 Rebekah denied the claims and sued for libel, but lost in the High Court in July where her evidence was deemed ‘manifestly inconsistent’ and ‘not credible’.

In October, she was ordered to pay 90 per cent of Coleen’s legal bills with the first £800,000 needing to be paid within six weeks.

The former Dancing on Ice contestant also has to foot her own lawyers’ bills, meaning the enormous cost of her failed libel claim is around £4million.

The WAG – whose reputation is in tatters after she scored one of the worst own goals in British legal history – is thought to have to find £800,000 of it in weeks. 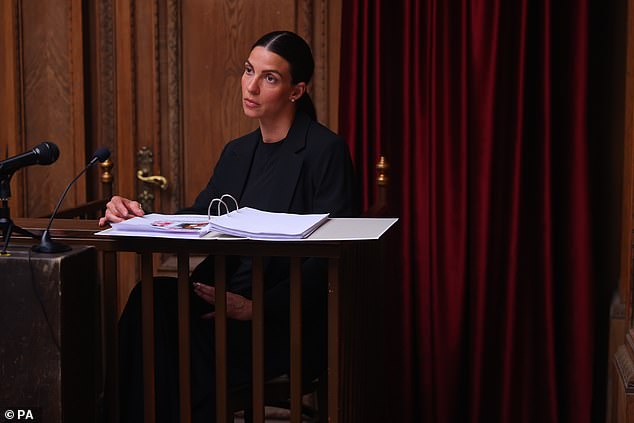 Legal battle: The former friends first publicly fell out in 2019 when Coleen accused Rebekah of leaking posts from her private Instagram account to The Sun

It comes at the hands of a High Court judge who dismissed her evidence as ‘evasive or implausible’ in one of the most closely-followed cases in recent years.

She was accused of deliberately deleting WhatsApp messages central to the case as it was suggested her agent also intentionally dropped her phone in the North Sea.

Vardy and her footballer husband were left with the bill after Mrs Justice Steyn ruled in favour of Rooney in a judgment that said swathes of her evidence given under oath had been ‘manifestly inconsistent’, ‘not credible’ and needed to be treated with ‘very considerable caution’.

She lost her high-profile libel claim against Rooney in July when Justice Steyn ruled that Rooney’s viral social media post accusing Vardy of leaking her private information to the press was ‘substantially true’. 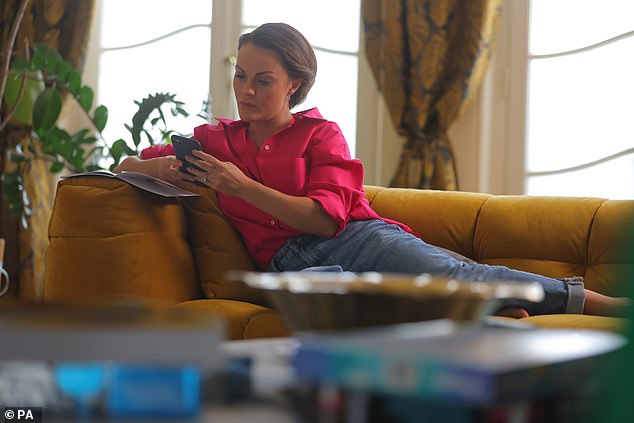 Show: Created from the real court transcripts, Vardy v Rooney: A Courtroom drama, will give viewers a chance to relive the untelevised scenes from inside the courtroom

It followed a viral social media post where Rooney had revealed she had put false stories on her Instagram page. These fake tales then emerged in The Sun newspaper.

Because she had changed her settings so only one user could see it she felt confident to make the famous declaration ‘it’s….Rebekah Vardy’s account’.

In an order made public on Tuesday, the judge ruled that Vardy should pay 90% of Rooney’s costs.

Rooney incurred total costs of more than £2 million, but £350,000 of those had already been racked up before the trial in May, so those were removed to produce a final figure of £1,667,860. 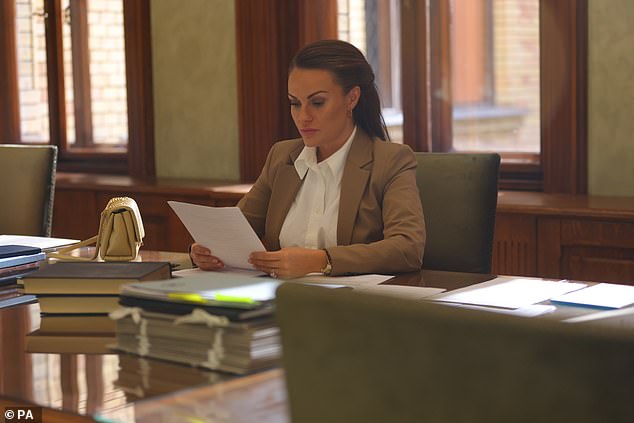