10 more vegan activists were today arrested after storming four dairy plants across the country as they vowed to continue waging their campaign against the UK’s dairy giants.

Animal Rebellion’s eco-zealots arrived at Arla and Muller’s processing plants to let down truck tyres and fill pipes with expanding foam as they launched a second day of direct action.

The vegan activists risked the wrath of the public after shutting down dairy processing plants for a second consecutive day amid a cost-of-living crisis.

In a statement released online, an Animal Rebellion spokesperson said they were plunging the dairy giants into chaos ‘in the name of animal and climate justice’.

Another protest from the offshoot of Extinction Rebellion took place outside the Queen Elizabeth II Centre in Westminster just hours before the new Tory Party leader is named.

One man was frisked by police before being detained, as four others were pictured sitting in the road opposite Westminster Abbey with signs reading: ‘Plant-based future’.

The vegan protesters, who oppose animal farming, yesterday forced the dairy giants’ trucks to stop before climbing onto them, as others trespassed company facilities to scale milk silos and loading bays.

The blockade included the UK’s biggest dairy distribution centre near Aylesbury, Buckinghamshire, which is owned by Arla, plus three plants run by Muller – at Droitwich, Severnside and Bridgwater.

Five protestors remained on the Bridgwater site as of midday Monday as specialist officer were called into action after the eco-zealots broke into the plant and locked themselves to objects. 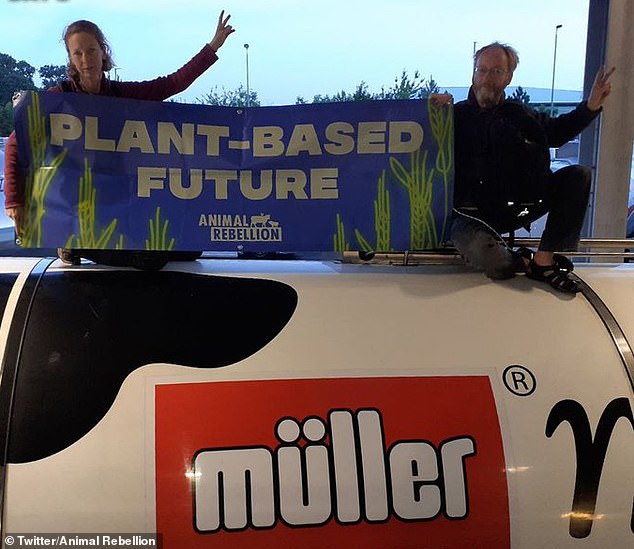 BRIDGWATER, SOMERSET: Vegan Animal Rebellion activists risked the wrath of the public after shutting down dairy processing plants for a second consecutive day amid a cost-of-living crisis 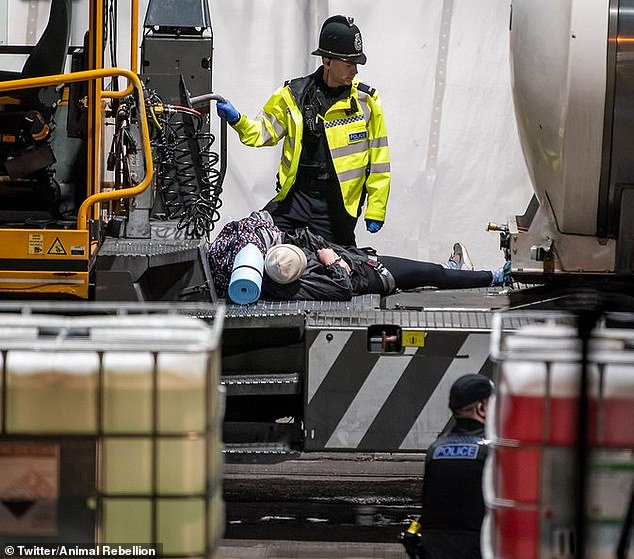 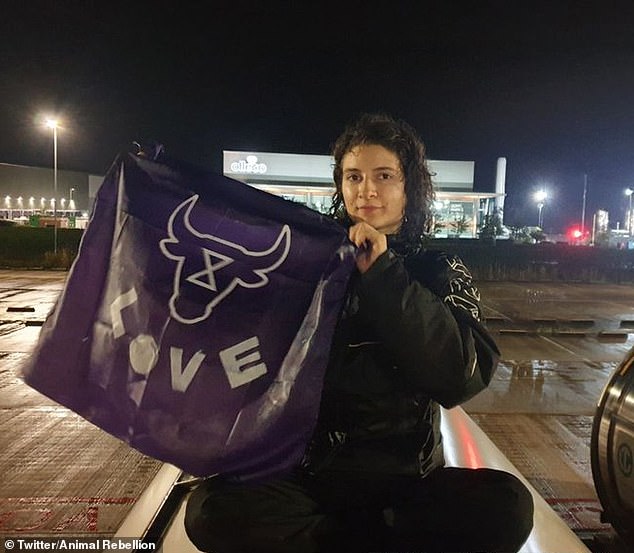 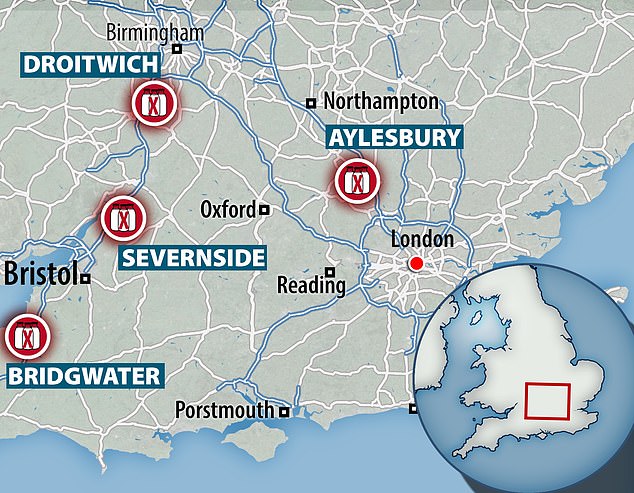 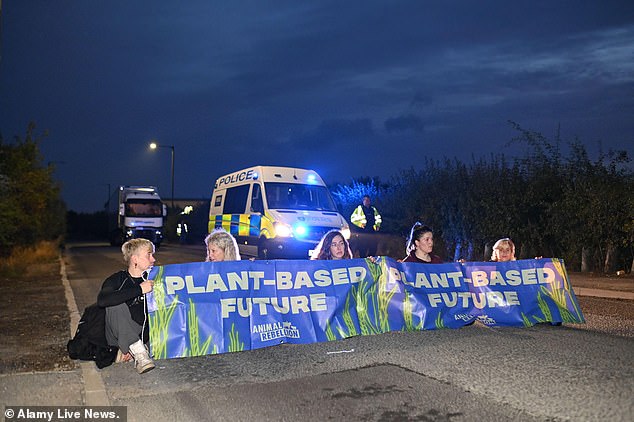 The protest group, an off-shoot of Extinction Rebellion, admits defying a High Court injunction recently obtained by Arla to stop the protests.

Meanwhile, Gloucestershire Police said they arrested eight people at the Severnside Dairy site and that the plant has remained operational during the protest.

Animal Rebellion said its supporters will continue to take non-violent direct action until the Government supports moves away from animal farming and fishing with a transition to a plant-based system.

The injunction sought by Arla to stop the protests warned that if the action lasts for two weeks ‘it is inevitable there will be milk shortages on supermarket shelves’.

Yesterday Arla said production was running as normal, adding: ‘We have protesters at our Aylesbury site and are working closely with local police to resolve the situation.’

And Muller UK & Ireland added: ‘We are disappointed to be targeted by a small number of activists who don’t represent the 96 per cent of adults in Britain who choose milk every week, and we will ensure supplies are maintained.

‘Dairy is affordable and packed with nutrients that benefit our bodies. During a cost of living crisis it is wrong to try to prevent it from reaching families.’

Assistant Chief Constable Dennis Murray on Thames Valley Police, said: ‘The protest caused some disruption to the Arla Foods site and the A41 for a short period of time but has now been safely resolved, with 23 people arrested.

‘Our response to the protest has reduced our ability to effectively navigate crimes and protect vulnerable individuals across the Thames Valley.

‘Thames Valley Police respects the right for peaceful protest but will take action when protest activity infringes on others going about their lawful business. 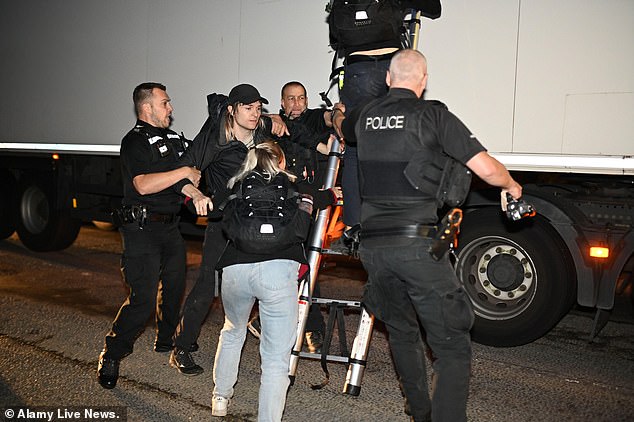 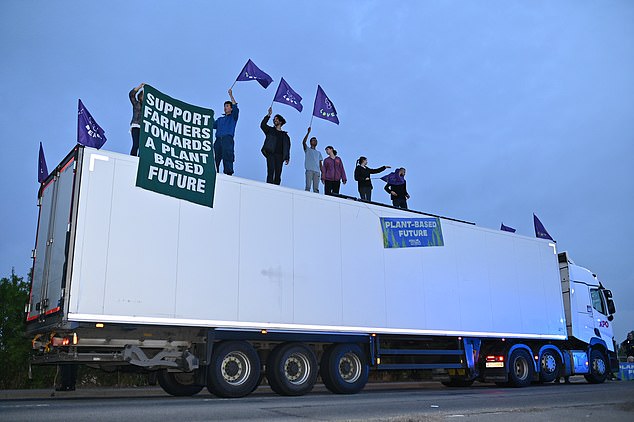 At the Aylesbury Arla site yesterday, the group stopped lorries and climed on top to halt the delivery of milk 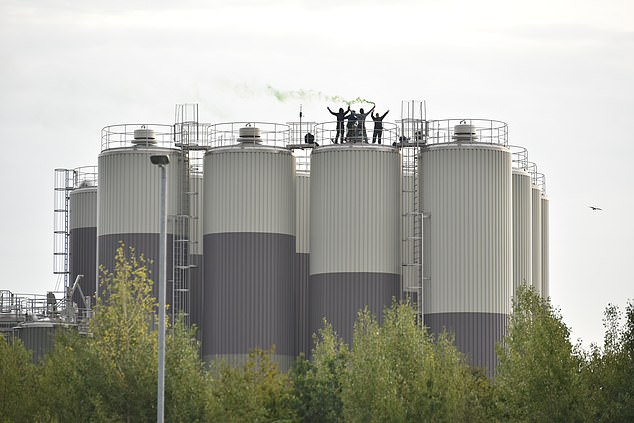 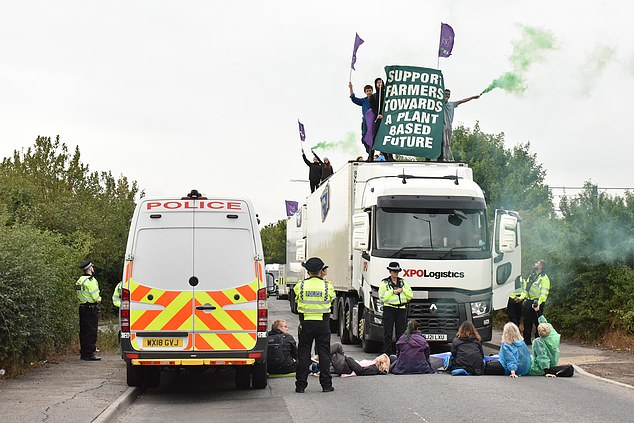 Animal Rebellion have been criticised by other vegans in the past, calling the group’s actions ‘detrimental’ and ‘hypocritical’ following milk being poured all over the floor at Harrods 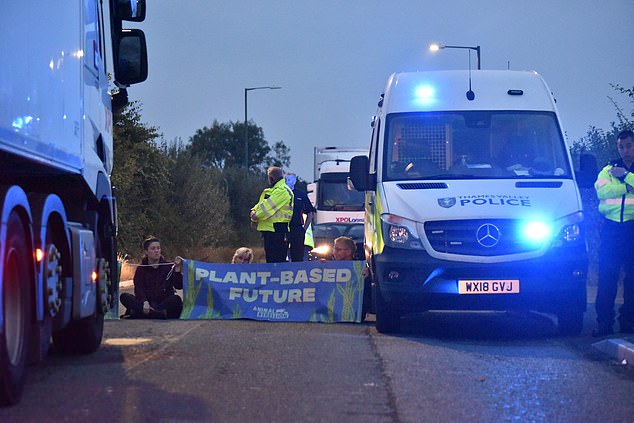 ‘Those who commit crimes while protesting will always be dealt with robustly by Thames Valley Police.

‘Protestors have now left the site and patrols will continue in the area.’

The Arla Aylesbury distribution centre process 10% of the UK’s dairy produce, with all four centres combined distributing around two billion litres of fresh milk every year.

The group are demanding that the Government ‘rewild the freed-up land and ocean’ and support farmers to move to a plant-based system. 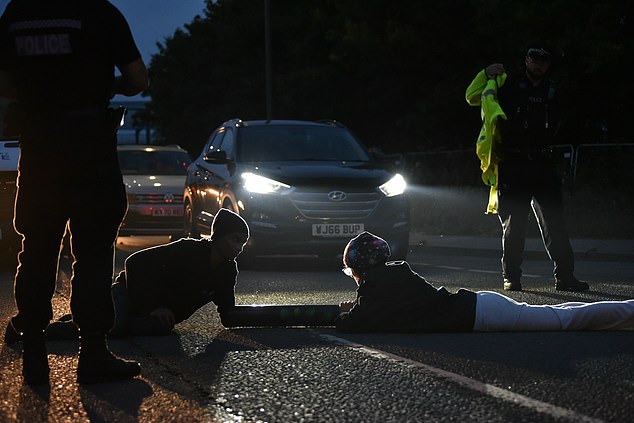 According to Thames Valley Police, the protestors left the site in Aylesbury and patrols will continue in the area 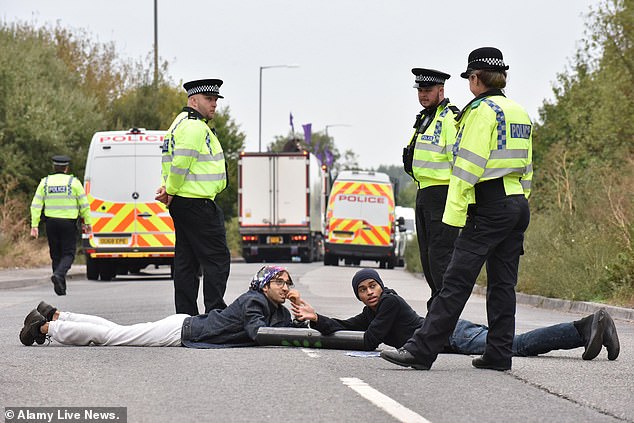 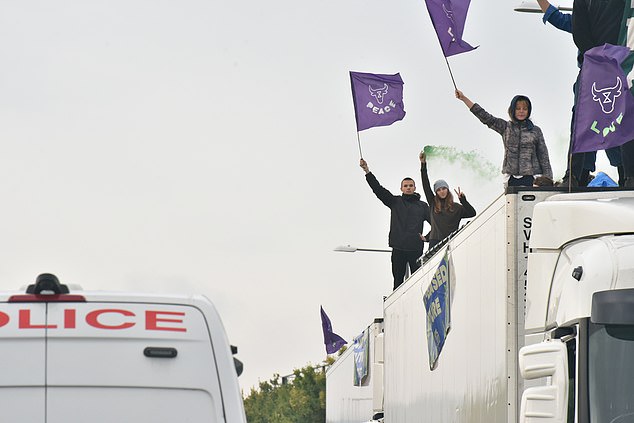 Twitter users pointed out that the protestors – who also staged sit ins at other supermarkets and cleared shelves of milk and dairy products – were only making ‘a mess for the cleaners to clean up’ and making it ‘dangerous for disabled customers’.

One said: ‘You didn’t hurt the dairy industry here, you gave them a large new order.

‘You hurt the workers at the store (who may be punished for the cost of the new order), you hurt poor and food insecure customers, you made it dangerous for disabled customers.

‘What is wrong with you?’

Another said: ‘Why do you clowns always make trouble for the working classes, never your own?’

The group have even been slammed by other vegans, who called their actions at Harrods ‘detrimental’ and ‘hypocritical’.

One account started the conversation saying: ‘Am I the only vegan who was seriously disturbed rather than impressed by the Harrods milk protest?

Other accounts were quick to voice their agreement, with one saying they ‘didn’t get it’ and it made ‘vegans look like fools’.

Another account said: ‘The mere idea of that protest angers me. It’s hypocritical at best.’