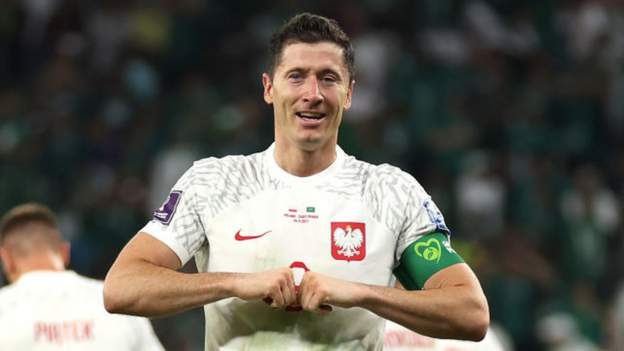 Lewandowski was visibly emotional after ending a run of four World Cup games without finding the net.

Piotr Zielinski had given Poland a first-half lead from Lewandowski’s cutback, but Saudi Arabia were awarded a penalty five minutes later for Krystian Bielik’s foul on Saleh Al Shehri.

Saud Abdulhamid was denied by Sczcesny and Al Brikan shot over the bar in the second half, while Arkadiusz Milik and Lewandowski were both denied by the woodwork as Poland sought to double their lead on the counter-attack.

Lewandowski’s late strike ended Saudi Arabia’s hopes of building on Tuesday’s remarkable victory over Argentina and boosts Poland’s hopes of reaching the last 16 for the first time since 1986, when they were beaten 4-0 by Brazil in the first knockout round.

Czeslaw Michniewicz’s team need just one point against Argentina on Wednesday to qualify from Group C, while Saudi Arabia face Mexico for a place in the last 16.

Lewandowski will steal the headlines after breaking his World Cup duck, but Saudi Arabia will be bitterly frustrated not to have preserved their unbeaten start to the tournament in Qatar after finding Sczcesny in inspired form.

Backed by a fervent and partisan crowd inside Education City Stadium, Saudi Arabia applied heavy early pressure and were denied a superb opener when the former Arsenal goalkeeper palmed Mohammed Kanno’s ferocious drive over the crossbar.

Poland looked increasingly rattled as the Green Falcons continued to swarm forward in waves, but Bielik’s goal-bound header was cleared to safety by Al Shehri before Zielinski gave them the lead with their first shot on target.

Bielik’s challenge on Al Shehri shortly before half-time initially went unpunished by referee Wilton Sampaio, but the Brazilian showed no hesitation in pointing to the spot after reviewing the incident on his pitchside monitor.

If Szczesny’s save from Al Brikan’s spot-kick was impressive, his fingertip stop from Al Burayk’s follow-up effort was spectacular – and will take some beating at this World Cup.

There was little change to the pattern of play in the second half, with Szczesny saving at the feet of Abdulhamid and Al Brikan sending a fierce, left-footed shot over the bar.

But Poland remained a threat on the counter-attack as Milik sent a powerful header against the crossbar, before Lewandowski’s near-post flick also came back off the woodwork.

It was Al Malki’s heavy touch that ultimately proved decisive, ending Saudi Arabia’s hopes of becoming the first team in Qatar to clinch their place in the last 16.

Lewandowski could have doubled his tally in stoppage time, but Al Owais kept out the striker’s effort with a strong hand.

Player of the match

Get the latest results and goal notifications for any team at the Fifa World Cup by downloading the BBC Sport app: Apple – Android – Amazon