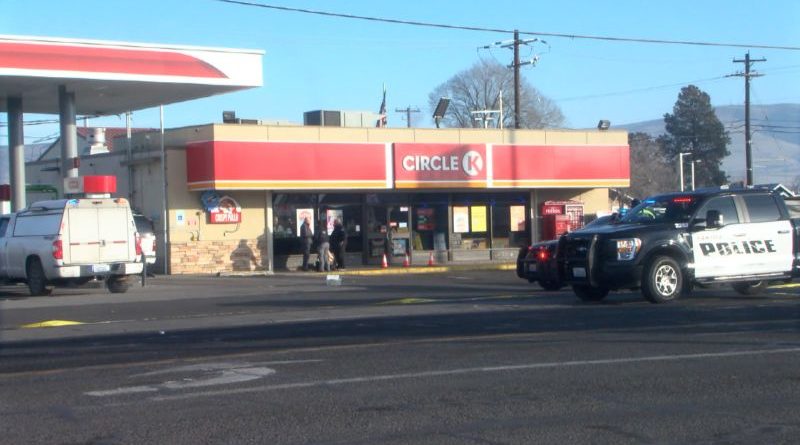 
The suspect in the overnight fatal shooting that left three people dead in Yakima, Washington, has died after taking his own life, the Yakima Police Chief said Tuesday.

Police were pointed to the suspect’s location after getting a 911 call from a woman who had lent the suspect her phone near a Target store in Yakima, Police Chief Matt Murray said in a Tuesday evening news conference.

Officers responded immediately and, within minutes, arrived at the scene, according to the chief.

“The suspect apparently shot and killed himself and that was prior to officers’ arrival. There were officers who heard the shots, but no one saw him actually do that,” Murray said.

Officials tried to save his life but he was later pronounced dead, according to Murray, who had earlier Tuesday indicated that the suspect had been taken into custody.

The chief said officials will need to go through the formal process of identifying the suspect, “but I can say with pretty good confidence that we believe that this is the person who was involved.”

The police department had earlier identified the “presumed homicide suspect” as Jarid Haddock, 21, a Yakima County resident, according to a Facebook post.

Police earlier had a house surrounded where they thought the suspect was when they learned he was in the area of a Target store in Yakima, the chief said.

There, the suspect asked a woman to borrow her phone and called his mom and “made several incriminating statements including ‘I killed those people,’” Police Chief Matt Murray said.

The woman heard the man say he was going to kill himself and called 911, according to Murray.

“I listened to that call. It’s pretty harrowing, and I have to really thank her again because she was very courageous in getting us there,” the chief said.

Murray said responding officers founding the man near a marijuana retailer, but did not provide information on whether he was inside or outside the business where he allegedly shot himself.

The suspect had “a large amount of ammunition” and a firearm when officers found him, the chief said.

Murray told CNN Tuesday that the suspect pulled into the ARCO/ampm gas station and “tried to get into the lobby,” but found the doors were locked.

“He then walked across the street to the Circle K,” Murray said. “As he’s walking into the store he pulls out his gun and there are two people getting food and he shoots them.” Both people died, Murray said.

The suspect then walked out of the store and shot another person, who also died.

Murray said the suspect went back across the street to the ARCO/ampm gas station and shot into a car and drove off.

“We later learned it was his car and that he shot the window of that car in order to get inside because he had locked his keys in the car,” Murray said.

The motive behind the shooting remains under investigation but Murray said the attack appeared “very much random.”

“There was no interaction between him and people,” the chief said. “They were just sitting there getting food and got surprised by this person who came in and … literally as he was opening the door, he started shooting these people.”

Justin Bumbalogh, who was working at Elite Towing and Recovery, next door to the Circle K, said he was half asleep when he heard gunshots. Police said the shooting occurred around 3:30 a.m. local time.

Bumbalogh said he heard around nine gunshots and remembered a distinct gap between the two series of shots.

Police responded shortly after the gunshots, he said.

FBI Seattle Field office Steve Bernd told CNN that they are aware of the incident and are in contact with Yakima Police in case they request assistance.

The chief said the suspect’s family was cooperating with police throughout the day.